I am currently studying the textbook Modern Optical Engineering, fourth edition, by Warren Smith. Chapter 1 presents the following diagram and explanation when discussion interference and diffraction:

If the illuminating source is monochromatic, i.e., emits but a single wavelength of light, the result will be a series of alternating light and dark bands of gradually changing intensity on the screen (assuming that $s$, $A$, and $B$ are slits), and by careful measurement of the geometry of the slits and the separation of the bands, the wavelength of the radiation may be computed. (The distance $AB$ should be less than a millimeter and the distance from the slits to the screen should be to the order of a meter to conduct this experiment.)

The author then goes on to say the following:

Now if the light source, instead of being monochromatic, is white and consists of all wavelengths, it can be seen that each wavelength will produce its own array of light and dark bands of its own particular spacing. Under these conditions the center of the screen will be illuminated by all wavelengths and will be white. As we proceed from the center, the first effect perceptible to the eye will be the dark band for blue light which will occur at a point where the other wavelengths are still illuminating the screen. Similarly, the dark band for red light will occur where blue and other wavelengths are illuminating the screen. Thus a series of colored bands is produced, starting with white on the axis and progressing through red, blue, green, orange, red, violet, green, and violet, as the path difference increases. Further from the axis, however, the various light and dark bands from all the visible wavelengths become so “scrambled” that the band structures blend together and disappear.

I'm wondering why the coloured bands appear in the specific order of red, blue, green, orange, red, violet, green, and violet. It seems that it has something to do with wavelength, but I'm not sure. I would greatly appreciate it if people would please take the time to explain this. 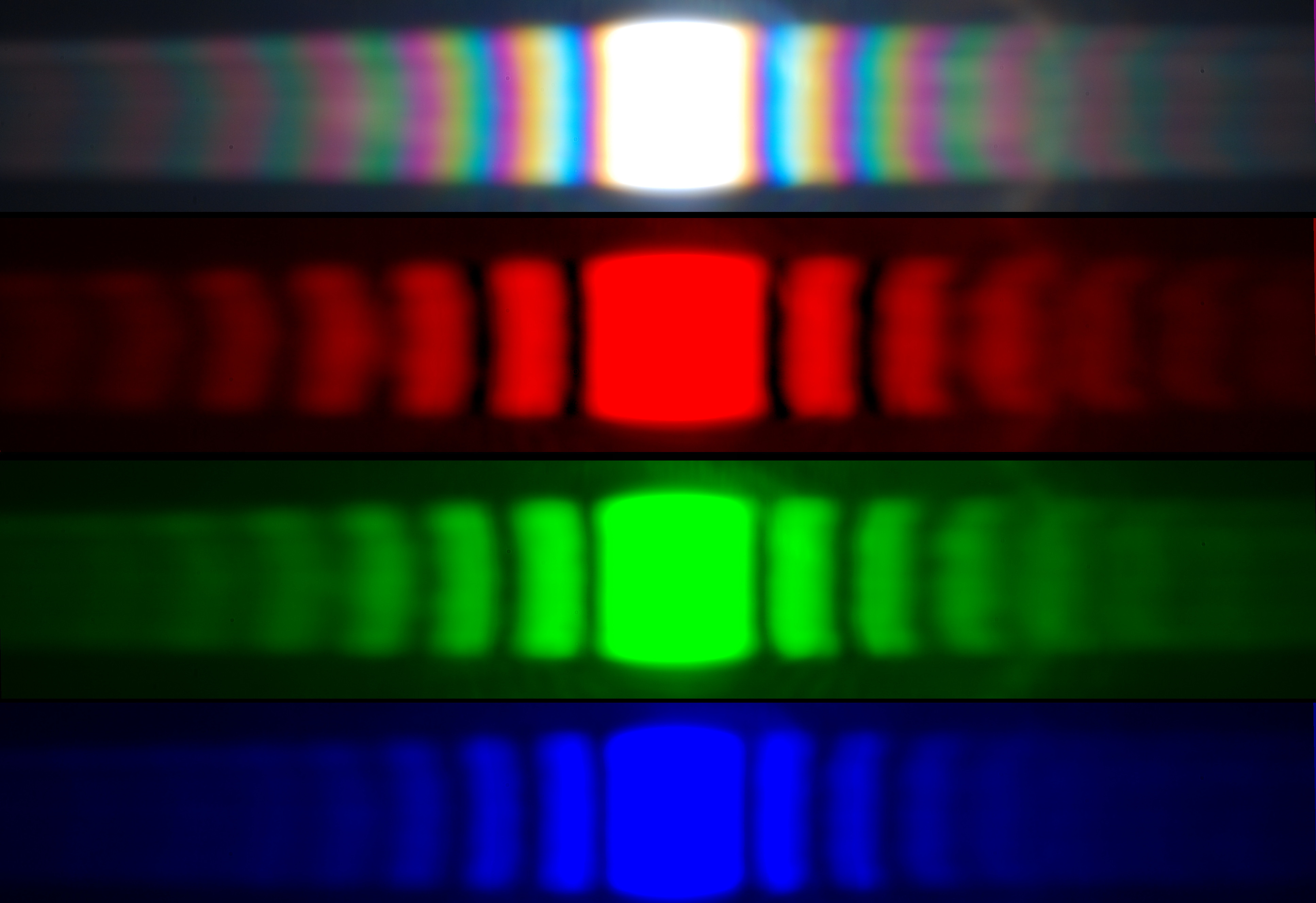 This is the single slit pattern in white light, together with the RGB channels of the camera.

The first color next to the central white region appears when the blue channel has its first minimum. But this gives the complementary color of blue, which is yellow. Not red!

Next is the complementary color of green: magenta.

Then the complementary color of red: cyan.

So this has to do with the physiology of the human eye, the three color receptors.

Not the answer you're looking for? Browse other questions tagged optics visible-light diffraction or ask your own question.

7
3D movie glasses making white light look red and blue
5
What is the sun's spectral series?
0
How is white light produced from only Red, Blue and Green?
3
Why does bright pure red/green/blue light look white if bright enough?
10
Why does the additive color model use red, green and blue instead of yellow, green and violet?
0
If the illuminating source is monochromatic, will result in a series of alternating light and dark bands of gradually changing intensity on the screen
4
Why is wavelength of violet colour less than wavelength of blue colour?