I'm working on a finite element simulation of the magnetostatic magnetic vector potential in 3D, with the following geometry: 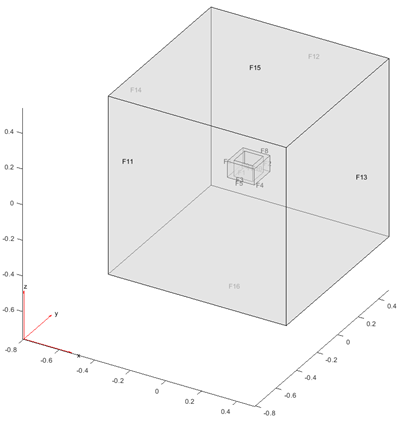 The internal structure is a hollow cored-rectangular current loop. The outer box is the spacial domain, set to be approximately 10x the characteristic length scale of the problem. As a result I expect magnetic flux to be wholly contained within this box. My equation to be solved is the vector Poisson equation in 3D: $$\nabla^2\vec A=-\mu\vec J$$

My question then is with regards to the boundary conditions upon the faces. For faces 11-16 (the outer box) I choose Dirichlet zero conditions which correspond to the flux-enclosed approximation mentioned.

Faces 1-10, i.e the faces of my coil I'm unsure of. Assuming A is non-divergent, I expect the magnetic vector potential to be continuous across boundary but I also expect the normal derivative of A to be discontinuous by the surface current density K (D.J. Griffiths (1999),"Introduction to Electrodynamics", Upper Saddle River, NJ, Prentice Hall). This corresponds to a tangential discontinuity in the magnetic flux due to some K. However I have noticed as I work through the literature that many papers seem to ignore this component and simply require A to be continuous e.g:

The part I am unsure of is how to find the surface current density (assuming this is important). I know for my rectangular-cross sectioned coil with winding height z, inner length L_i, outer length L_o with N turns carrying a current I, the average current density through a winding section is: $ j_{0} = \frac{IN}{z(L_{o} - L_{i})/2} $.

I also know the surface current density is also likely to vary with my faces in accordance with the geometries.

Summarizing: the boundary conditions for the vector potential at a material interface with discontinuous permeability are $\eqref{7}, \eqref{8}, \eqref{10}$

Not the answer you're looking for? Browse other questions tagged electromagnetism magnetic-fields electric-current boundary-conditions magnetostatics or ask your own question.

1
Existence of $(\tilde{V},\mathbf{\tilde{A}})$ for each $(V,\mathbf{A})$ that gives rise to the same EM-fields
1
Solving Laplace's Equation for magnetostatic problem in the absence of currents