Has a 3D chart of nuclides ever been published or proposed $(N, Z, S)$? What information might it show?

Phys.org's 'Strange' glimpse into neutron stars and symmetry violation leads to the new Nature Physics Letter Measurement of the mass difference and the binding energy of the hypertriton and antihypertriton and that led me to Wikipeida's Hypertriton which says:

Normal nuclei are formed only of protons and neutrons. To study them, scientists arrange the various nuclides into a two-dimensional table of nuclides. On one axis is the number of neutrons N, and on the other is the number of protons Z. Because the antihyperon introduces a third component (strangeness), the table becomes three-dimensional.

However the article only shows the more familliar two-dimensional Z vs N Chart of Nuclides something like that shown below.

which leads me to ask:

Question: What would a 3D chart of nuclides actually look like (neutron and proton number and strangeness; $N$, $Z$, $S$)? Has one been made? If so, what information is entered for each entry?

Example of a more conventional 2D $Z$ vs $N$ chart: 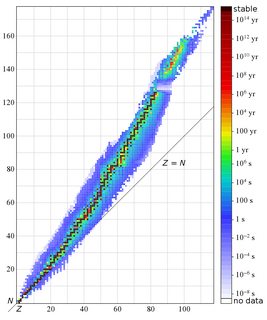 (This anecdote kind of straddles the line between a comment and an answer.)

I saw the beginning of such a table in a conference presentation a decade ago. The format was the same as the usual (Z,N) chart of nuclides, but the data were measured lifetimes for hypernuclei where one baryon was a $\Lambda$. The heaviest nuclei on this chart had mass number $A\lesssim5$ --- it was just the low-mass corner of the table of isotopes.

I suppose you could construct such a table for nuclei where one baryon is a $\Sigma$ with some charge quantum number. Nuclei with more than one strange baryon are unlikely to be experimentally accessible. So the presentation wouldn't really by three-dimensional; it'd be a series of similar-looking two-dimensional diagrams. Nuclides with one $\Lambda$ hyperon, nuclides with one $\Sigma^+$ hyperon, etc.

I only vaguely remember this conference presentation, but I think the presenter was describing work done in Jefferson Lab's Hall B. That might be enough information to point a motivated sleuth towards an actual publication.

Not the answer you're looking for? Browse other questions tagged particle-physics nuclear-physics quarks isotopes or ask your own question.

4
Physics in high lepton chemical potential
9
Mass defect- From where mass is being lost?
2
Can we observe proton decay?
0
The semi-empirical formula and $E=mc^2$
2
Why don't neutrons cluster on their own?
1
In what way is mass converted into energy in nuclear reaction?
15
How can the radius of a bare neutron be negative?
2
Binding energy, fission and fusion
1
If we need the term/concept of “isotope”, or why we call them “elements” of the periodic table