By Huygens-Fresnel principle, will a spherical impulsive wave become non-impulsive in large distance? 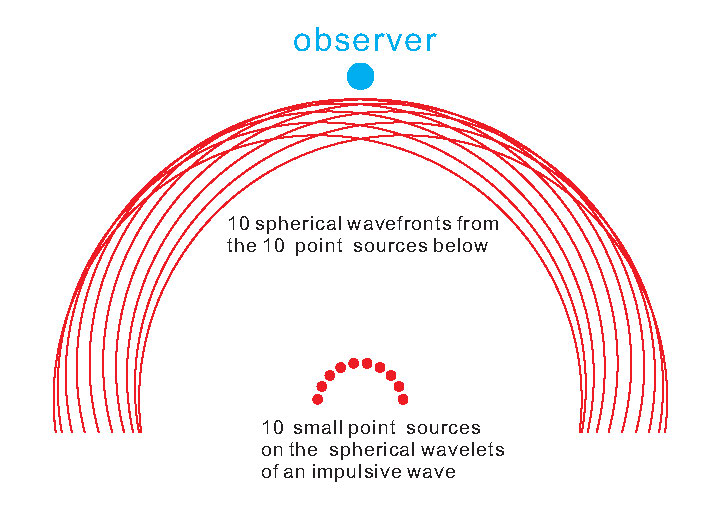 As shown in the Fig. here, the representative 10 points sources on the wavefront of an impulsive spherical wave (a very narrow impulsive wave that is like a delta function in the radial direction), will emit 10 wavelets (in shape of sphere) propagating outward. By Huygens-Fresnel principle, the wavefront that the observer receives, should be formed by sum of these 10 spherical wavelets.

However, obviously, the observer will NOT receive an impulsive wavefront (this requires that those 10 wavelets arrive SIMULTANEOUSLY), but instead, the 10 wavelets arrive at the observer successively (NOT SIMULTANEOUSLY) in a width of duration of time (the scale of the time duration seems positively correlated to the scale of the source). This time duration can be ignored in normal lab. scale, but cannot be ignored for very huge distance such as astronomy cases.

Nevertheless, by considering the intuition and the symmetry, an impulsive spherical wave (like a delta function) will propagate outward isotropically and should keep the impulsive property, IF WITHOUT any effect of dispersion. It is weird, if a very narrow peak-like waveform of impulsive wave automatically themselves become a much flatter waveform without any medium caused dispersion?......

Thus, which consideration above should be correct please? It is interesting to think whether a spherical impulsive wave will become non-impulsive or still keep impulsive in large distance?

"Making waves: the geometric derivation of Huygens' Principle for wave propagation, and the problem of the wake"

If every point on the surface of a sphere simultaneously emits an impulse (Dirac delta function) the resulting expanding spherical wave will not be a impulse. If it is observed as a function of time as it passes an external point it will be a rectangular pulse of width 2R/c where R is the radius of the sphere and c the speed of wave propagation.