Where does energy go in joining capacitors of different capacitance charged by different potential, hypothetically assuming no resistance in circuits?

I don't understand why there is any change in initial and final energy since we have already assumed a perfectly conductive circuit. I mean, theoretically at least, there should be no change in energy.

Now, considering there is a change in energy at all, is it because electrons accelerate in moving from one capacitor to another, so energy gets dissipated in the form of electromagnetic radiation? 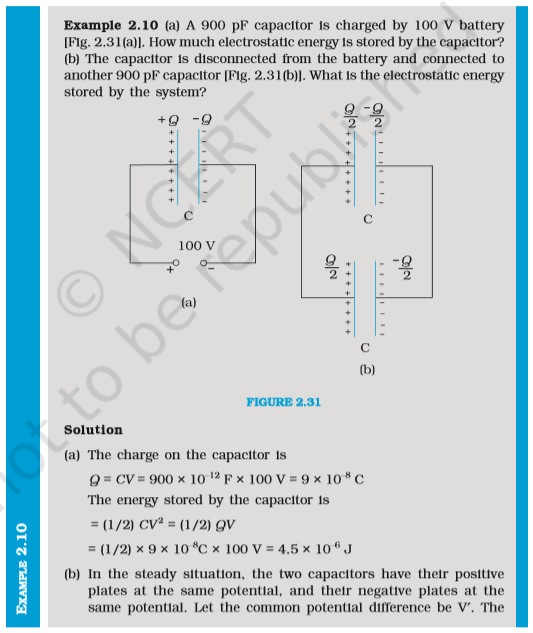 Short Version: When the resistance in the above circuit is zero, the system will never attain equilibrium.

by John Rennie sir in chat.

When a capacitor of capacitance $C$ is given a charge $Q$, and at time $t=0$, it is connected to an uncharged capacitor of equal capacitance through a resistance $R$, the charge on the second capacitor as a function of time is given by the following equation:

When the resistance in the circuit is non-zero, it takes some time before the charges in the two identical capacitors equalise. The charge on the two capacitors after a long time will be equal to $Q/2$. If you calculate the energy stored in the electric field in the capacitors before and after the connections are made, you could clearly see some energy loss (and this is what the example problem in the question is about).

When there is some resistance in the circuit, the energy is lost due as heat developed in the resistors. But your question is how (and why) is the energy lost when there is zero resistance in the circuit? It turns out that when you analyse the system when $R\to0$ using the equation mentioned earlier, the time constant ($RC$) decreases with decrease in $R$. Or in other words, the time required to attain equilibrium reduces.

But when you put $R=0$, we get an invalid equation. Or we can imagine the system to never attain equilibrium. Usually when you have non-zero resistance, the energy lost due to thermal energy damps the oscillations of charges in the capacitors. You can imagine this to be similar to that of a pendulum which stops oscillating after some time due to energy lost to the surroundings. However, when no energy is lost to the surroundings, the pendulum keeps on oscillating. In a similar way, when there is no resistance in the circuit in your example, the system never attains equilibrium. Charges get continuously transferred back and forth between the two capacitors somewhat similar to how energy is interchanged between an inductor and a capacitor in an LC oscillation (as pointed out by Keith McClary).

When charges move due to an electric field (i.e. down the potential gradient) the electric potential energy of the system decreases. When you put in the second capacitor there is a brief moment where an electric field is present that causes excess charges to move to the other plates. Hence you have less energy stored.

Or you can view it as doubling the area of the plates, thus decreasing the field between each plate by half, which decreases the energy by half (two systems each with a quarter of the original energy). Although this is somewhat already covered by the solution you supply, but not explicitly. But this gives a better picture, as it doesn't really matter how we actually make the system, as potential energy only depends on position of the charges, not how they got there.

Any way you look at it, "I mean, theoretically at least, there should be no change in energy" is not a true statement. We are talking about electric potential energy, which can change even if there are no dissipative mechanisms in the system. You don't need to bring in any sort of radiation. You can imagine moving each charge one-by-one very slowly if you want.

Yes, even assuming a perfectly conductive circuit, there would be some inductance (you may not have studied this yet) which would create an oscillating LC circuit, which would radiate. Some early spark gap radio transmitters worked like this.

There is a short period of time through which the electrons move from the charged capacitor to the uncharged capacitor. Through this time, assuming the wire has zero resistance, the energy is lost through the magnetic field generated by the accelerating electrons.(We know the electrons accelerate because the potential difference changes, implying the existence of an electric field, which exerts an opposite electric force). If that electric potential is changing, then the force itself is also changing.

You can also think about this in an electrostatic context. Consider two positive charges, when the charges repel and move away from each they lose the potential energy they had. The same is happening to the electrons that were stored in the initially charged capacitor. It is that energy.

Not the answer you're looking for? Browse other questions tagged electrostatics electric-circuits electrical-resistance capacitance dissipation or ask your own question.

19
What happens to half of the energy in a circuit with a capacitor?

3
Battery charging a Capacitor
3
Apparent violation of energy conservation in an electromagnetic transformer system
6
Why is all of the energy from a battery stored on an inductor but only 50% on a capacitor?
1
Dissipative energy intuition
1
Kinetic Energy and Inductor energy violates conservation of energy?