Is the probability of an electron being somewhere zero?

So recently I've been reading "How to teach Quantum Mechanics to your Dog" by Chad Orzel. In chapter 3, he says, if I understood this right, that electrons can only exist in specific quanta - that is they can only be in certain regions, and will perform a quantum leap over regions that are not stable energy levels. However, I've also seen stuff online about how electrons can be "anywhere" and that the further away they are from the nucleus, the less probability they have to be there. Is the probability of an electron being somewhere zero? Can electrons be anywhere? And if so, how and what is the need for a quantum leap?

In chapter 3, he says, if I understood this right, that electrons can only exist in specific quanta - that is they can only be in certain regions, and will perform a quantum leap over regions that are not stable energy levels.

Electrons (that are confined by a potential well, such as when they are part of an atom) are indeed limited to certain quantized energy levels. And they will only be able to gain or lose energy only in quantized amounts.

But no matter the energy level, the electron is not really restricted in what position in space it might be found in. I.e. there are no "regions" of space where it can't be found. There are, depending on the energy level, regions of space where it's spectacularly unlikely to find the electron (like you could take as many electrons as ever existed in the visible universe, put them into this state, and then observe their position and you probably wouldn't find one at that location). But in principle it's still possible to find the electron anywhere in space.

For example, if you have an electron in a hydrogen atom, excited to one of the "2p" energy states, and you observe its location, you'll most likely find it in the locations indicated by these drawings:

It's highly unlikely to find an electron in the 2py state (for example) located far (a nanometer or so) up along the z axis (and a picometer off the xz plane). But it's not entirely impossible. There is actually, as pointed out in another answer, a locus of points on the xz plane, called a node of the wavefunction, where the probability of finding the electron is actually 0.

what is the need for a quantum leap?

The quantum leap is a leap in the energy of the electron, not its location in space.

The Photon more or less has it right, the probability distributions of the orbitals (even in the state of being bound in an atom) extend infinitely far away radially, albeit with increasingly vanishing probability. I think the confusion comes from the fact there are certain "regions", planes and other 2D surfaces really, quite close to the atom, where there is absolutely 0 probability. These are the nodes that arnav009 refers to. Below is a graph of the radial probability distributions of the hydrogen s-orbitals for increasing (quantised) energy states n = 1, 2, 3... 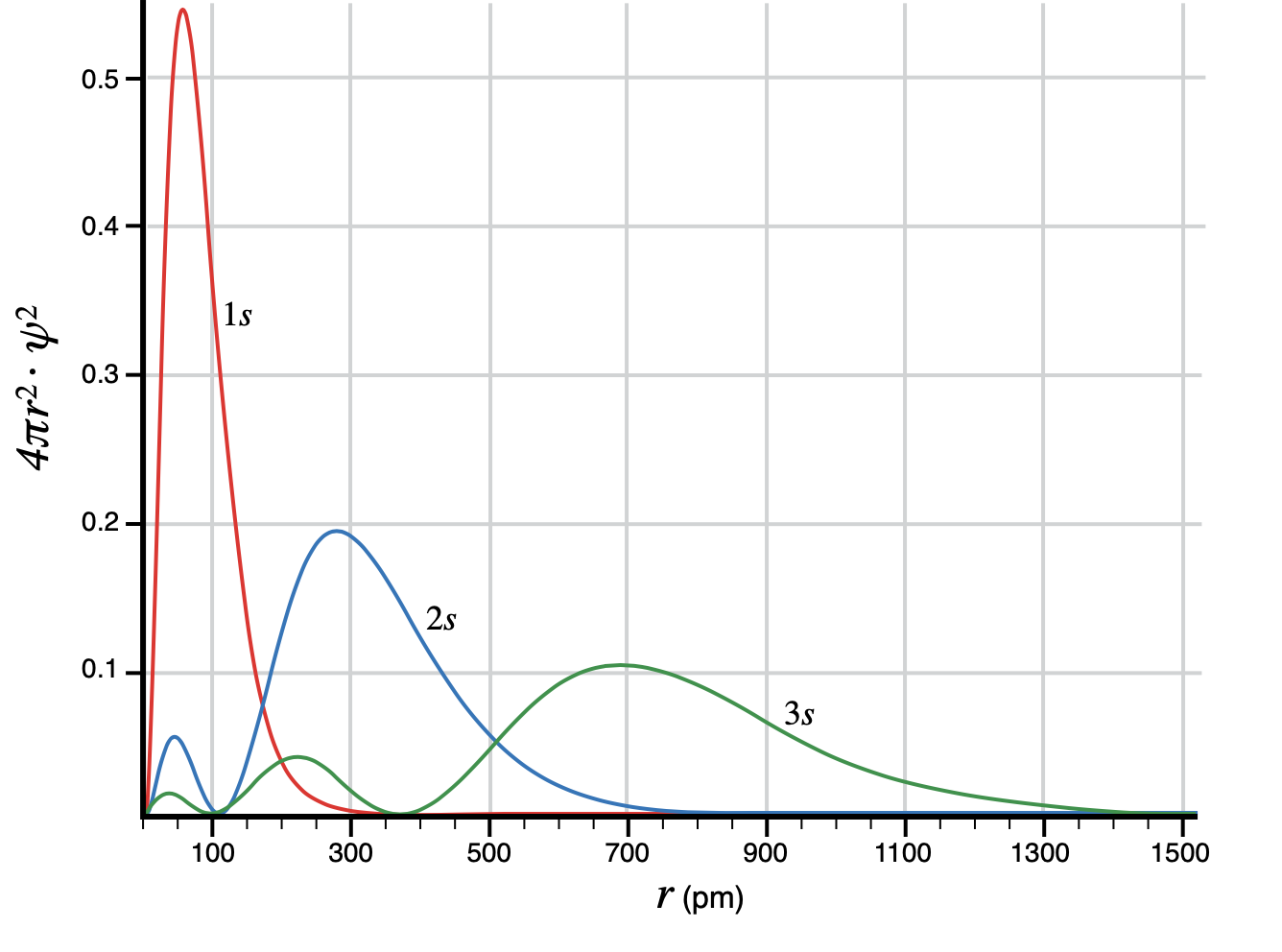 So to answer "Are there areas with zero probability?" The answer is that there are infinitely small volumes (nodal planes), where there would be vanishingly small probability anyway. However there is exactly 0 probability density at these nodes, and they affect the overall shape of the wavefunction.

You may notice on the vertical axis there is an extra factor of $4\pi r^2$, this is because the area of the shell at a given radius is larger the further you are from the nucleus. So if $\psi^2$ gives you the probability density of being at a specific location in space, then $4\pi r^2\psi^2$ gives the probability density at being anywhere in a spherical shell at a specific radius from the nucleus, and the non-zero probability of being in a finite volume of a shell of width $dr$ is $\int 4\pi r^2\psi^2 dr$.

The s-orbitals have only spherical nodes. p, d, and higher orbitals also have nodal planes (regions of 0 probability) that pass through the nucleus called angular or azimuthal nodes. The total number of nodes of an orbital is one less than the principle quantum number: $n-1$, and the angular momentum quantum number $\ell = 0, 1, 2...$ for $s, p, d,...$ gives the number of angular nodes, so the number of radial nodes is $n-\ell$.

Below can be seen the radial nodes inside spherical s-orbitals correlated with the radial probability density diagram. Source 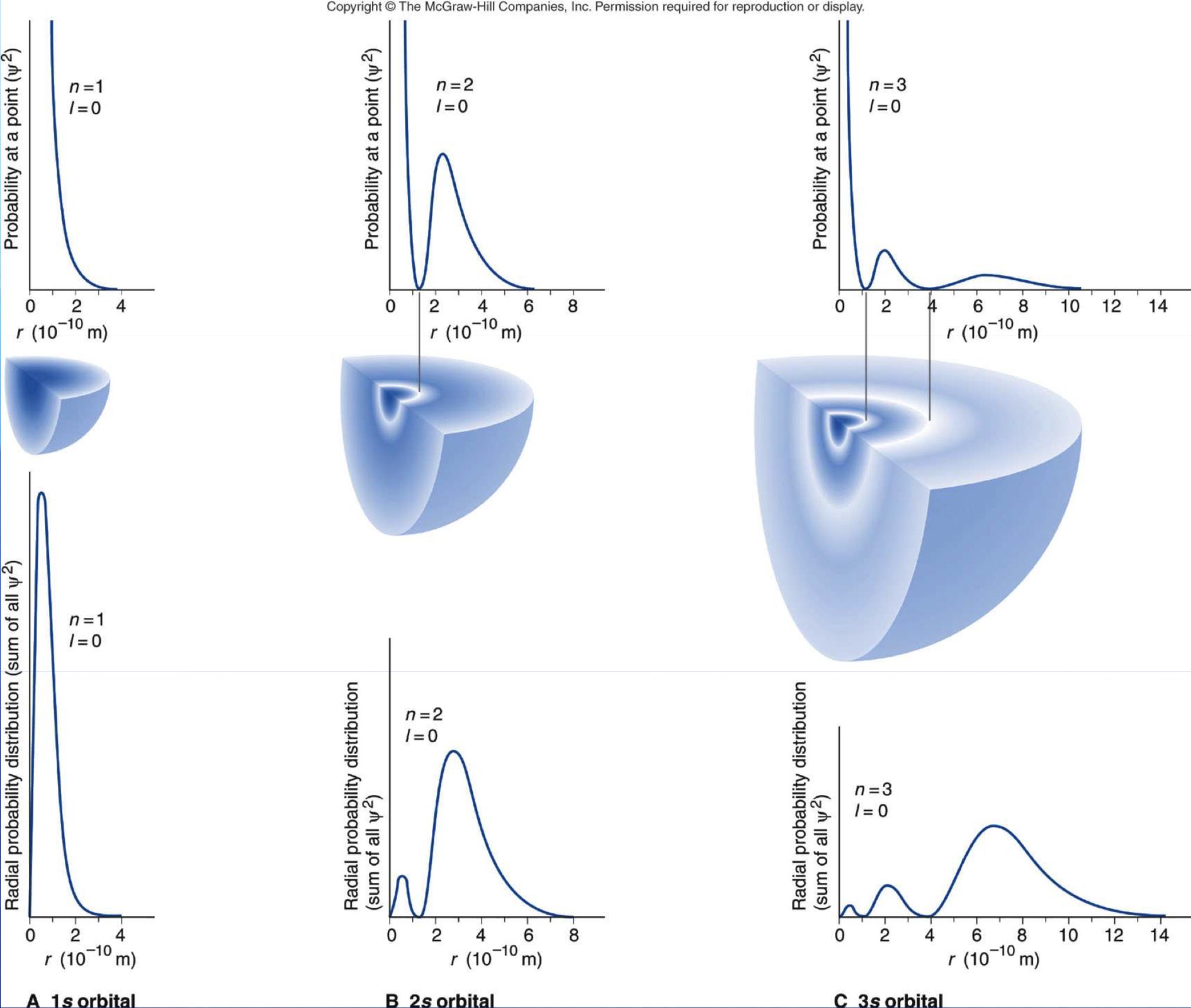 For hydrogen and for what are called "hydrogens" atoms, which have only one electron, the energy of the orbitals depends only on $n$, so there is no difference between the energy of $2s$ and $2p$ orbitals. For atoms with multiple electrons, the other electrons shield the nucleus from each other and this changes the relative energies of the sub-shells (ex. $2s$ vs $2p$).

You can see here orbitals of different $\ell$, $p, d, f...$, laid on top of each other. This is looking at a radial slice at angle of maximum electron density (perpendicular to angular/azimuthal nodes). Notice that higher $\ell$ means fewer radial nodes (the azimuthal nodes are invisible here), and that the first radial node is closer to the nucleus. 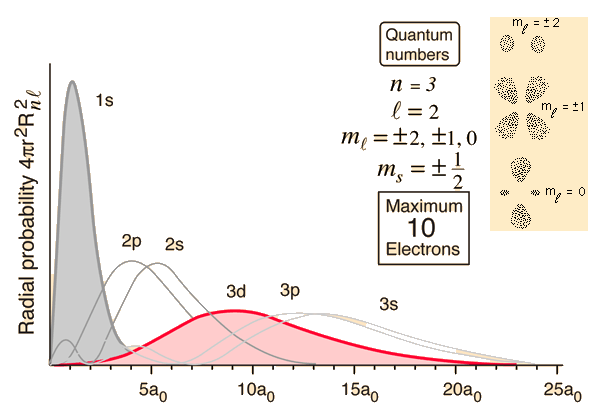 Here is an absolutely fantastic site where you can view probability contours and 3D models of lots of atomic (both hydrogenic and hybridised) and molecular orbitals. Here is a sample 3p orbital, where you can see both the angular nodal plane through the nucleus, and the radial node making each blob a blob inside a blob, with the blue and green colours denoting the different phases separated by a nodal surface. 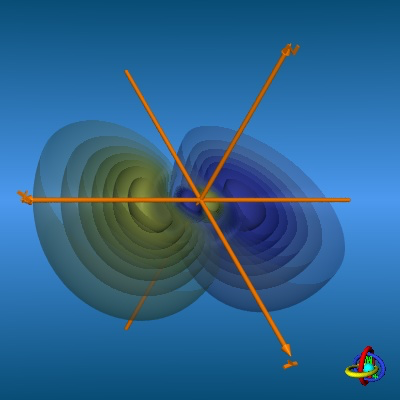 Great question, I love this stuff!

It is possible to have systems where the electron has exactly no probability of being found: in an infinitely deep potential of finite width $a$, the electron cannot be found outside the well. Granted this is not a representative example.

The probability of being found in a small region of size $dx$ is $\Psi^*(x,t)\Psi(x,t)dx$, where $\Psi(x,t)$ is the wavefunction describing this electron (sticking to 1d for the purpose of this discussion). Thus, the function $\Psi(x,t)$ must be strictly $0$ over the entire region of size $dx$ for the probability to find the electron in that region to be $0$. Most functions $\Psi(x,t)$ are not $0$ over a finite interval, although one can “manufacture” systems where this could happen (v.g. arranging infinite wells side by side).

In the more common cases, like the hydrogen atom or the harmonic oscillator, the probability of finding an electron is not $0$ over a finite (however small) interval except at infinity.

Note there are situations that have $0$ probabilities. The Hong-Ou-Mandel effectis an example of destructive interference of two identical photons which strictly prevents - under the right conditions - two photons from exiting in different output channels of an interferometer: only situations where both photons come out the same output are possible. However this is not a single particle effect.

Not the answer you're looking for? Browse other questions tagged quantum-mechanics wavefunction atomic-physics probability orbitals or ask your own question.

9
Does the wave function always asymptotically approach zero?
3
Is it that electron of an atom can be found anywhere in the space?
7
Can I steal your electron?
1
Velocity of electrons during transition to different energy
9
Electron as a standing wave and its stability
8
Electron falling into proton approaches infinite kinetic energy why?
0
How are line spectra explained after rejecting/improving Bohr's theory?
1
How do electron wavelengths relate to orbitals and probability density?