Why is an EMF induced when the magnetic flux remains constant?

Let us consider a metal rod of length $l$ rotating about an end with a uniform angular velocity $\omega$. A uniform magnetic field $\vec B$ exists in a direction perpendicular to the plane of the screen and is going into it. The free end of the rod slides along an annular metallic disk as shown in the following diagram: 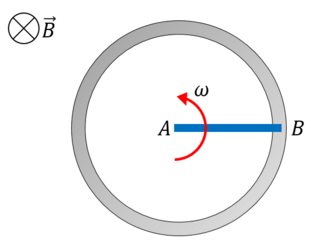 As the rod is rotating about one of its ends, all points on the rod will move in a circle of radius $r$ with a speed given by $v=r\omega$ where $r$ is the distance of the point from the axis of rotation and $\omega$ is the angular speed. Let us consider the following diagram: 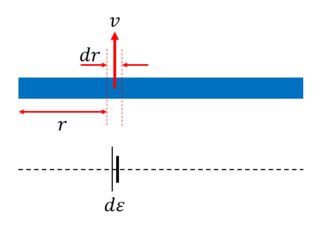 The element $dr$ is at a distance $r$ from the axis of rotation and moves with a speed $r\omega$. Due to its speed in the magnetic field, it can be replaced by a cell of EMF $d\mathcal{E}=vBdr=r\omega B dr$. Doing the same thing for each and every element, we can replace the entire rod with a series combination of such cells. The overall EMF of the rod between the points $A$ and $B$ is:

On this basis, I can clearly understand why an EMF must be induced between the point at the centre and the annular disk. However, when we analyse the system using Faraday's law, it seems there must be no EMF induced as the flux remains constant (both magnetic field and the area of the loop is constant). Why is there a contradiction when we analyse the system in this way? Both methods are well established, and I don't see where I'm going wrong while analysing this using Faraday's law.

Please click the images to view them in full resolution.
Image courtesy: My own work :)

I guess there is no contradiction. EMF is induced along the metal rod, as you analyzed using $dE=vBdr=r\omega Bdr$. There is no EMF along the annular ring because the flux it bounds remains constant.

7
What force causes the induced EMF of a loop? And, the difference between a loop EMF to motional EMF?
3
Motional EMF and Flux rule contradiction
0
If a current loop falls through a uniform magnetic field - is there a voltage induced?
3
How does change in magnetic flux density only induce EMF?
1
Why is magnetic flux used to measure induced emf? And some other questions on electromagnetic induction
0
Can emf be induced by reducing the radius of a loop?
1
Can the emf induced in a conductor passing through the magnetic field be explained via magnetic flux?
2
EMF induced due to moving rod in magnetic field
1
Why is the electromotive force (EMF) highest in the loop when $\theta$ = $90$?