Why does ice make such peculiar sounds? [duplicate]

I've come across a couple of videos where some interesting sounds are produced using ice. (Click on the images to see the video.) 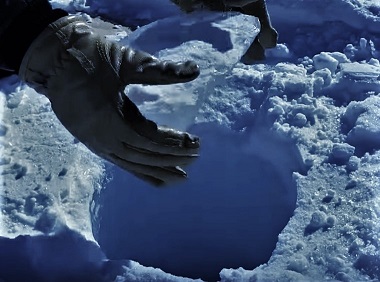 Here, they drop a block of ice into a deep crevice and as the block falls, you can hear some strange sounds. These sounds remind me of some sound effects in old cartoons and sci-fi movies. The pitch of the sounds start high and end up low. Is this some kind of doppler effect?

Here, there's a man performing 'nordic skating', making the same sounds as he skates on top of a thin ice sheet. Maybe they are caused by the cracking ice. But why does that sound like this?

There are some other videos too, where they skip stones on frozen lakes. 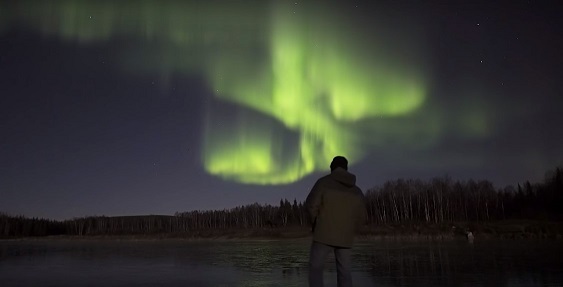 Here the ice makes some high-frequency sounds which correspond to the chirping of birds.

What are these sounds and why do they sound the way they sound?

The pitch of the sounds start high and end up low. Is this some kind of doppler effect?

No. This is chirp induced by dispersion, which is the acoustic version of the same phenomenon for light. This refers to the fact that, generically, sound waves of different frequencies travel at different speeds.

This can be caused by the material properties of the medium, and it can also occur if the sound wave is confined in some kind of waveguide (like a hole or a sheet of ice). For each individual sample a full analysis is necessary to understand which bit of the circumstances caused the dispersion (so it's hard-to-impossible to tell you any specifics about the individual recordings you've given) but the phenomenon is fairly generic so it really doesn't matter much.

If you have short, sharp sounds, the waveform will typically have a very high harmonic content, i.e., if you decompose it as a superposition of monochromatic waves at different frequencies, it will cover a broad band of such frequencies. For the sounds you've given, the higher frequencies travel faster, and you get that descending chirp as the sound transitions to the lower frequencies which take longer to arrive.

The reason this sounds so similar to a sci-fi 'blaster' sound is because this is how blaster sounds were first recorded: Star Wars sound engineer Ben Burtt created (recorded) that sound by recording the guy wire of a tower when he tapped it with a spanner: 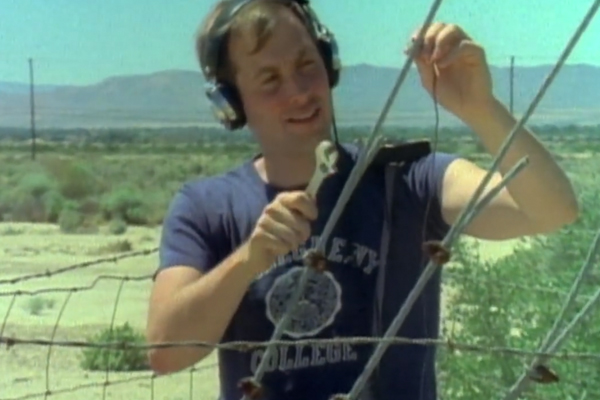 Under tension, the transverse waves have exactly the same dispersion as the ice, so the physics is the same, and the sound is the same.

For more discussion of this, see this previous question on this site.

It's also worth mentioning that the equivalent phenomenon for light ─ taking a short pulse and passing it through a dispersive element so that the higher and lower frequencies arrive at different times ─ is the heart of what makes Chirped-Pulse Amplification (the dominant technology for creating intense pulses of light) work.

This phenomenon is known as Acoustic Dispersion.

Acoustic dispersion is the phenomenon of a sound wave separating into its component frequencies as it passes through a material.

This happens because the phase velocity of a sound wave is a function of frequency in a dispersive media $^{\dagger}$. Much similar to how electromagnetic waves disperse when they pass through prism.

Sound waves consist of waves of many different frequencies. When a sound wave travels through air, its component frequencies usually travel together at the same rate, so they all reach the human ear more or less simultaneously. But due to ice being a dispersive media the sound waves propagating through it disperse. Hence high pitch frequencies get separated from low pitched one. And this gives that sci-fi effect to the sound that you hear.

This has been explained over here:

Not the answer you're looking for? Browse other questions tagged waves acoustics everyday-life dispersion ice or ask your own question.

20
Slinky reverb: the origin of the iconic Star Wars blaster sound
4
Can someone explain me the origin of the sound from this YouTube video (link given)?
284
What is Chirped Pulse Amplification, and why is it important enough to warrant a Nobel Prize?
8
Why do some types of waves disperse?

40
Ice skating, how does it really work?
4
Why do ice cubes make a cracking sound when placed in fizzy wine (Prosecco)?
7
Why does an ice cube not twirl along when twirling a drink glass?
14
Is it possible to create an audible sound source in mid air by intersecting ultrasonic sound beams?
12
Why does soda fizz when it meets ice?
0
Why aren't sounds ever distored
81
Why does fire make very little sound?
7
Why does warm water and cold water make different sounds?
3
Why does ice fragment vertically?