What if the net force provided for a circular motion is larger than the required centripetal force?

Will an object be pulled towards the centre linearly if the net force provided for a circular motion is larger than the required centripetal force? And why?

For example, if the object in a circular motion which is connected by a string is pulled towards the centre by hand.

Let's be more exact about this:

where $r$ is the radial coordinate and $\theta$ is the angle from the $x$-axis.

If we apply only a radially inward force $\mathbf F=-F\,\hat r$, then we end up with two coupled differential equations 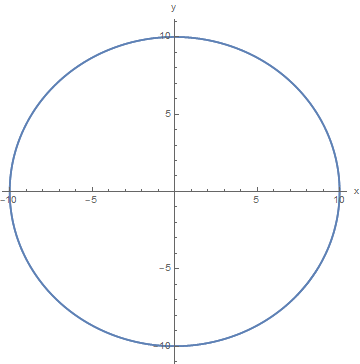 So, now what if we keep our same initial conditions that we had in our uniform circular motion, and we suddenly double our force magnitude from $10$ to $20$? Well, unlike what other (now deleted) answers are saying, we don't get a spiral to the origin. We actually get oscillations in $r$, as shown below: 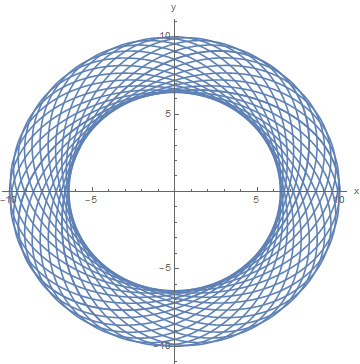 This makes sense. From a fictitious force perspective, the centrifugal force acting on the object will increase as it moves radially inward, thus there comes a point where the object is pulled outwards rather than inwards. Then the object will eventually move out, then back in, etc.

If we want to get to the center, let's try increasing the force over time. As a first pass, lets make the force magnitude a linearly increasing function of time that starts at our uniform circular motion force. For example, if $F=10\cdot(1+10\cdot t)$ we end up with this trajectory: 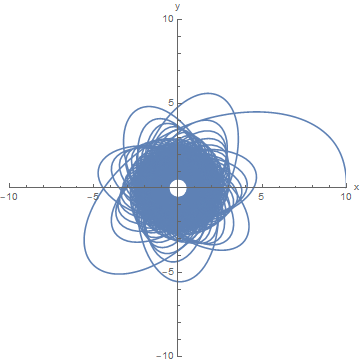 where the trajectory can get as close to the origin as you want as the force increases. However, there will still be oscillations in $r$. You will not get a perfect spiral with this type of force.

To gain more insight, let's reverse engineer how to get a spiral. As a simple first step, let's look at a spiral that goes inward with a constant linear radial speed and constant angular speed. This is easily described by the following equations (note that I'm using the variable $v$ here as the "inward speed", not in the usual sense like $v=r\omega$) $$r(t)=r_0-vt$$ $$\theta(t)=\omega t$$

So, this cannot be done with a string because $F_\theta\neq0$.

We are close though! More realistically, if we are actually pulling on a string by hand then we are likely directly controlling $r(t)$ while having $F_\theta=0$. So let's combine the two classes of scenarios covered above and say $\mathbf F=-F\hat r$ for our string and constrain $r(t)=r_0-vt$ to try and get an inward spiral. Then our equations of motion become $$0=\dot\theta^2(r_0-vt)-\frac Fm$$ $$\ddot\theta=\frac{2v\dot\theta}{r_0-vt}$$

The second differential equation let's us determine $\dot\theta(t)$ as (notice how angular momentum is conserved, which is a nice sanity check)

And so the force we need is given by

We get a centripetal force that is increasing in magnitude, which is what we wanted. But notice how now it increases as $1/(r_0-vt)^3$ rather than just linearly with respect to $t$. Note that now we can only look at $t<r_0/v$ since crossing $t=r_0/v$ would make an infinite force. 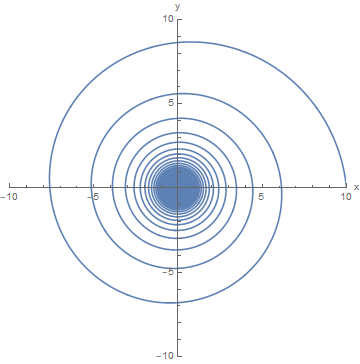 So finally, let's answer your question

Will an object be pulled towards the centre linearly if the net force provided for a circular motion is larger than the required centripetal force? And why?

Assuming by "linearly" you mean with a constant radial speed, then the answer is yes as long as you increase the force in just the right way. This has a simple explanation in the frame rotating with the object: you are supplying just the right amount of force to balance the centrifugal force at all points in time.

Not the answer you're looking for? Browse other questions tagged newtonian-mechanics forces centripetal-force angular-velocity or ask your own question.

2
What happens if I increase the magnitude of the centripetal force?
1
What happens when you pull in on a rotating object?
2
Object on a banked curve
0
Accurate mathematical description of angular acceleration?
1
Which force causes an increase in tangential speed during decrease in radius of circular motion?