Apply a force to a rotating wheel

Consider a wheel with the center point O of the wheel is fixed and rotating freely around an axis passing through O. Assume that it is spinning in the horizontal plane and that there is no force applied to it. Now, suddenly we apply a force $\vec F$ to it as shown in the figure. 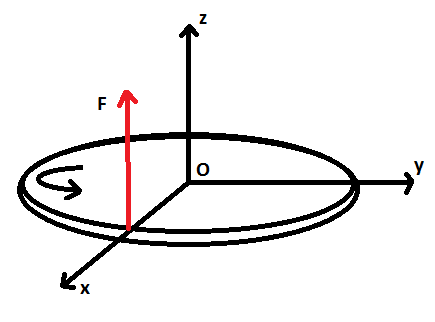 From experiment, due to the gyroscope effect, the wheel will start rotating about x axis, since the $\vec F$ force will take effect 90 degrees ahead.

Not the answer you're looking for? Browse other questions tagged homework-and-exercises newtonian-mechanics rotational-dynamics torque gyroscopes or ask your own question.

3
Why are Euler's equations of motion coupled? Physical explanation
0
Understanding work with rotational momentum/moment of inertia
10
Lagrangian equations of motion for ball rolling on turntable
0
Express Rotation of a body around a rotation axis in rotation about interial axes
0
Resolution in cylindrical co-ordinates
0
Confusion regarding angular momentum of a tilted rod
5
Does the intermediate axis theorem violate angular momentum conservation?