A problem about moment (torque ) [closed]

Ask Question
Asked 9 months ago
Active 9 months ago
Viewed 72 times
0
$\begingroup$
Closed. This question is off-topic. It is not currently accepting answers.

Everybody knows that moment of a force increases with distance. However, there is a problem about it that makes me confused these days: Let's take a look at this picture

due to the formula M = F.d, the level will be balanced. And because the two object have no acceleration, there must be forces that counteract with their weights. so let's assume g=10m/s^2 and analyze the picture above. 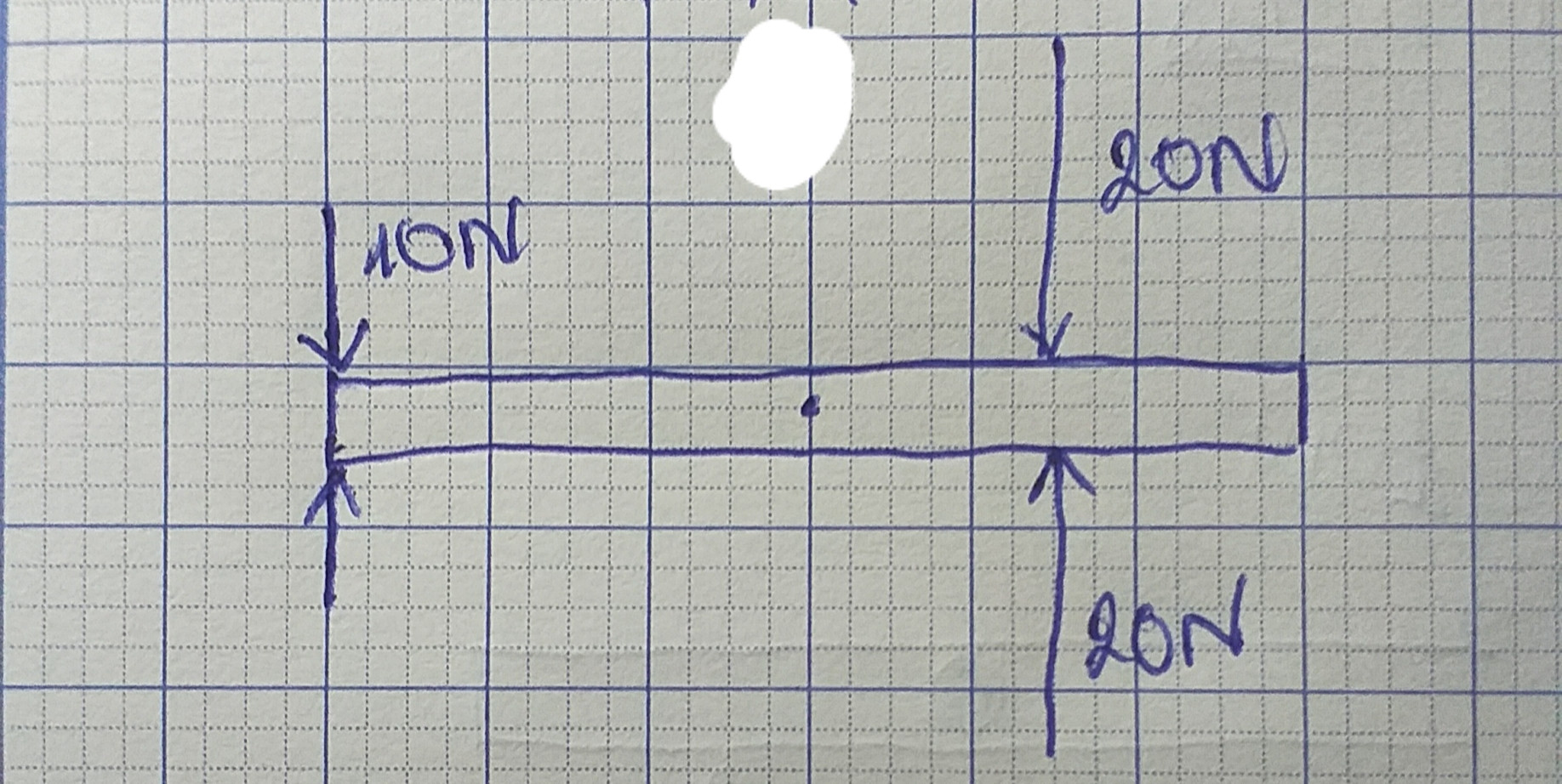 So in this picture we can see that if we apply a force of 10N on 1 end of an arm, a 20N force will appear at a half length of the other arm with opposite direction. Now let's remove a 2kg object, and the force of 10N will cause the level to rotate an angle ( let's assume it rotates 90° ) in a specific time. When an arm rotate, the other will do the same thing in the same amount of time, however, the arc that a 1kg object move ( assume its attached to the level and will not fall off ) is bigger than the arc that a point at where the 20N force apply on travel. To be more easy to imagine, let's look at this picture.

Imagine we stick 2 apple on a level that balanced each other by their weights. Now we push the right apple with a force F upward, it will rotate, and the other will do the same, but with a bigger arc though they start and stop at the same time due to the equation v = r.w ( i can't type the omega symbol ) However, as I mentioned above, if we apply a force of 20N on the right apple, the left apple only feel 10N downward. With less force being applied, how can it move faster than the right apple? 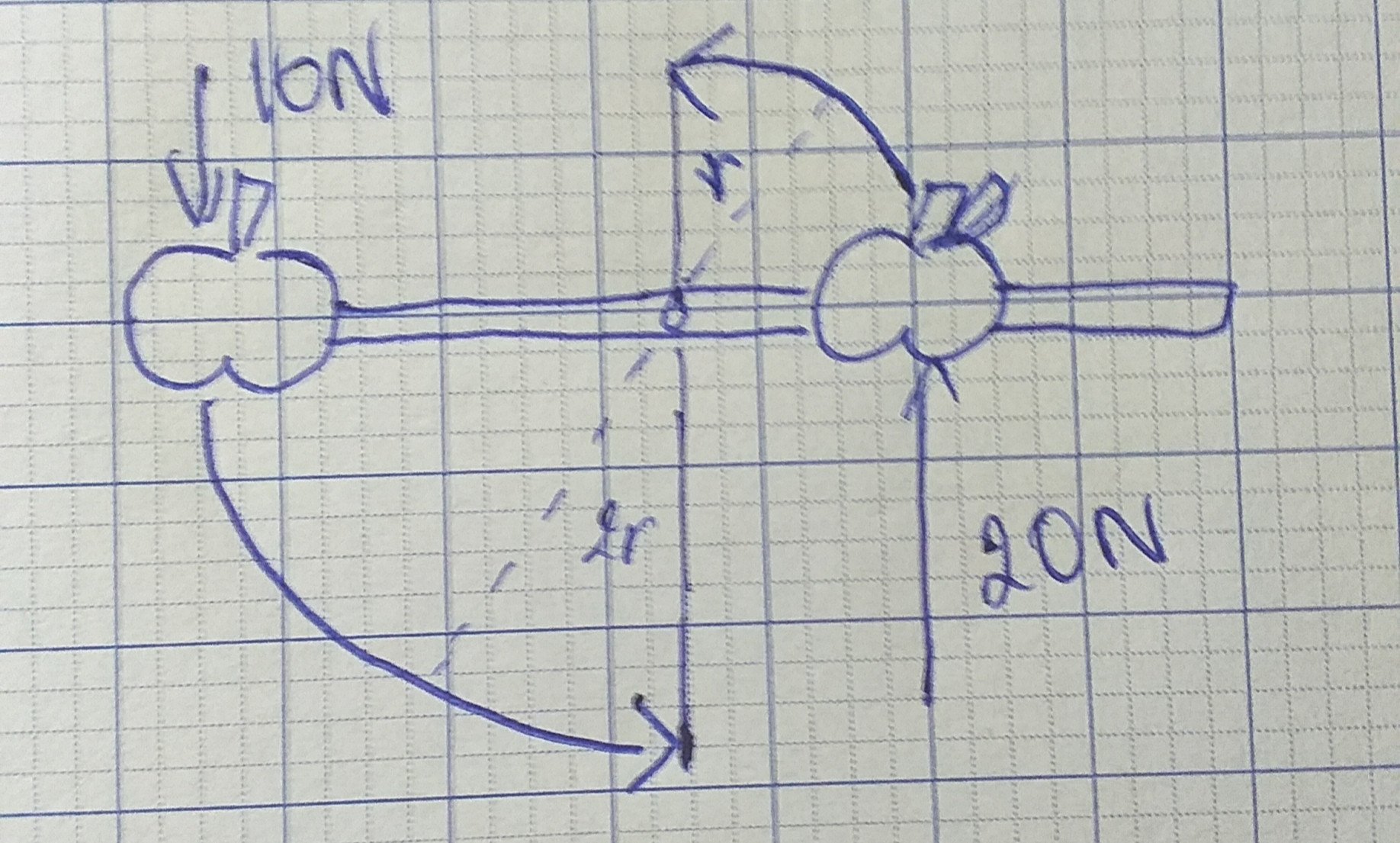 this is my first article, if it has any mistake or hard to understand, please forgive ><.

Your mistake was that you didn't considered it as a rigid body. Your bar has mass (you applied a force to the bar). You could say that you bar was massless and that you applied the force in the apples you put on it, but that doesn't help you. The two apples, which have mass, are fixed at some distance. They aren't two punctual mass, they are one non puntual mass (i e. rigid body).

You are not just talking about forces and translation. You are dealing with a rigid body rotating, so you should use Newton's law for Rotation. As you said, $\mathbb{\tau}=\mathbb{F}×\mathbb{r}$.

In conclusion, you didn't have two different forces, you have one torque. And, yes. With the same $\sum\mathbb{\tau}$ differents points on the bar move at a different $||\mathbb{v}||$.

you can not apply just a force, the force has to go for a distance, so you have to do some work F*s. this work ist greater, the farther away your second apple is. Do you know what moment of inertia is?

Not the answer you're looking for? Browse other questions tagged homework-and-exercises newtonian-mechanics torque statics moment or ask your own question.

5
Finding the acceleration of a cart rolling on a table
1
Torque in a heavy and light Body
2
Is the newton's second law for a body experiencing a frictional force, relative to the surface in contact?
0
Moment around a point in a frame
0
Moments of a barbell
0
Torque/moment of force fundamentally
0
Trouble with tension
0
Returning a seesaw to balanced
0
Moment of force about a point definition