Work done by an electric field in this case 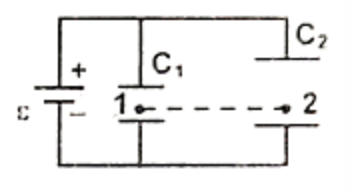 Where am I going wrong here? I don't see any mistake in my application of concepts. Is the electric field of a capacitor not always parallel and would I also have to account for edge effects or something similar?

Is the electric field of a capacitor not always parallel and would I also have to account for edge effects or something similar?

Yes, this is the key. The field lines of a capacitor are not perpendicular to the plate everywhere. They are approximately perpendicular far from the edges, but as you get closer to the edge that approximation progressively fails. Outside the capacitor the field begins to look more like a dipole field than a uniform field.

Regardless of the shape of the field, the conservation of energy works. So it is more useful to focus on the potential rather than the E field.

The electric fields only exist between the plates and they are different in the two capacitors. Hence it is incorrect to assume that charges moving perpendicular requires no work to be done.

Not the answer you're looking for? Browse other questions tagged homework-and-exercises electromagnetism capacitance or ask your own question.