In the The Feynman Lectures on Physics, Volume I, Chapter 20, Section 3,The Gyroscope found here, Feynman wrote

We note that when the wheel is precessing, the particles that are going around the wheel are not really moving in a plane because the wheel is precessing (see Fig. 20–4). As we explained previously (Fig. 19–4), the particles which are crossing through the precession axis are moving in curved paths, and this requires application of a lateral force. This is supplied by our pushing on the axle, which then communicates the force to the rim through the spokes.

Can someone please explain how the forces $F$ applied in Fig. 20-2 are lateral? I would have thought that the lateral force needed to be applied along the y-axis instead of the z-axis in order to supply the force needed to make the particle travel in the curve shown in Fig. 20-4 similar to Fig. 19-4. I can't figure out what this has to do with the Coriolis-effect which Fig. 19.4 is demonstrating. 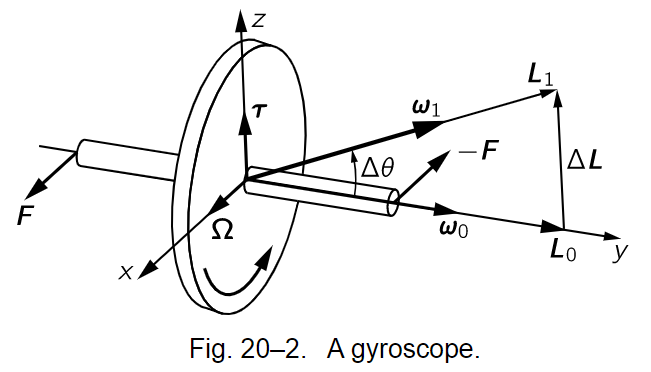 I can’t see the numbered figures, so let me walk you through a slightly different physical example: a helicopter rotor.

Imagine the rotor is turning counterclockwise views from above. A rotor blade goes from “ahead” to “left” to “behind” to “right”.

But note what’s really happening: the impulse is a force for a time, which is a velocity change. Only after a time will it become a position change.

So when the rotor is turning, the blade is moving right to left at the front. The impulse adds a small downward component to the large right-left speed: the blade tip starts moving on the diagonal. It doesnt move down right at the front. It starts moving down, but only gets down by the time the rotor blade has moved to the left: the turning rotor tilts to the left, not forward.

If you want a rotating rotor, gyroscope or other object to rotate in a particular way, you have to exert the torque 90 degrees before in the rotation. 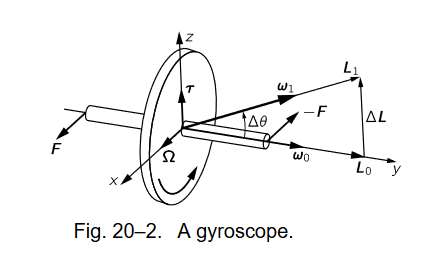 The reasoning that Feynman presents is very indirect.

So: if the wheel would not be spinning you would need a bit of torque around the x-axis to get the reorientation depicted in fig. 20-2, but as I said, Feynman treats that one as negligable.

Feynman then reasons as follows: the torque that corresponds to the vector $\Delta L$ is a torque around the z-axis. So: as you were reorienting the wheel from initial angular momentum to new angular momentum you must have been exerting the forces $F$ and $-F$ which both lie in the xy-plane.

Notice that here Feynman doesn't attempt to explain. He is laying out: if you apply the formulas as presented earlier in the chapter this is the result you get.

Not the answer you're looking for? Browse other questions tagged rotational-dynamics gyroscopes coriolis-effect precession or ask your own question.

3
How does a wheelie work?
3
Gyroscopic Force/Torque of a Constrained Wheel
1
How does precession affect angular momentum?
0
Gyroscope precession torque
1
Angular momentum paradox
2
The dynamics of a cornering wheel
1
Torque on Axle and Wheel
1
Apply a force to a rotating wheel