What is the intuitive reason that the trajectory of a charged particle in a uniform crossed electro-magnetic field is a brachistochrone?

Cycloid is a type of trajectory which is traced by a point on the circumference of a planar circle rolling without slipping on a surface. It turns out that this is the solution to the Brachistochrone problem, that is the curve along which a material particle may slide without friction in the least time, under the acceleration due to gravity or any uniform force field (such as a charged particle in an electric field). Besides, the path that light takes through an optically non-homogeneous medium is also a cycloid. This intriguing connection of the resulting trajectory being the same for these phenomena has been explored and is explained beautifully by Steven Strogatz in this video.

However, the motion of a charged particle in a uniform crossed electro-magnetic (EM) field is also a cycloid. Is there an intuitive explanation (perhaps from a Hamiltonian perspective) why this correspondence exists? It is tempting to guess the Hamiltonian perspective to explain this equivalence of the resulting dynamics since all these phenomena must follow from minimizing an action. Additionally, please feel free to contribute any ideas or cite any references addressing any relationship with the Fermat's principle of least action of light (cycloid in non-homogeneous medium) which in effect is also a crossed EM field and the trajectory of a charged particle in a uniform crossed EM field?

I’m sorry to disappoint you, but in general the motion of the charged particle is not a cycloid. Dare I say it? In the textbook page you linked, Feynman was wrong! The path in Fig. 29-20 does not have cusps, so it’s not a cycloid. Of course, Feynman wasn’t wrong about the physics, just the definition of a cycloid.

We can follow the derivation provided in one of the comments above to see the details of the motion (except that I'll follow the motion of an electron instead of a positively charged particle). In the coordinates where the electric field is zero, the electron goes in a circle with a radius $\rho$ (the Larmor radius) and angular velocity $\Omega$ (the cyclotron frequency). If there is no initial motion in the $z$ direction, then \begin{align} x’ &= \rho\cos\Omega t\\ y' &= -\rho\sin\Omega t. \end{align} Back in the original coordinates, we need to add the drift velocity, which for $\mathbf{B}$ in the $z$ direction is $(E/B) \hat{\mathbf{y}}$, and we have \begin{align} x &= \rho\cos\Omega t\\ y &= \frac{E}{B}t - \rho\sin\Omega t. \end{align}

The path described by these equations is a trochoid, which is a generalization of a cycloid. The image (from Wolfram MathWorld) shows that troichoids can be traced out by an arm added to a rolling circle. 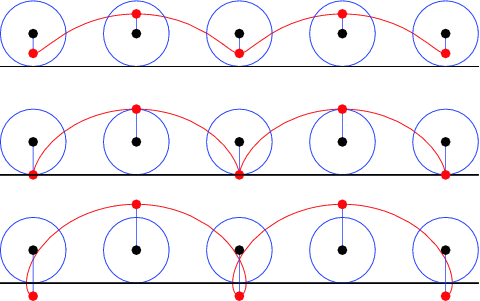 If the relationship between the linear motion and the rotation is just right (as in the middle image), you will get a cycloid, but that's a special case.

As for light following a cycloid path in a non-homogeneous medium, that is also not true in general. If you look closely at the lecture you cited, you'll see that Fermat's principle is specifically applied to a velocity changing as $v = \sqrt{2 g y}$. It would be remarkable if an optical medium happened to have this property, but that's not the intent of the author. Fermat's principle is actually being applied to the heavy particle rolling down a track.

In summary, there is no profound principle at work here. Just geometry.

Not the answer you're looking for? Browse other questions tagged newtonian-mechanics electromagnetism geometric-optics variational-calculus brachistochrone-problem or ask your own question.

4
What is the position as a function of time for a mass falling down a cycloid curve?
3
How to find the equation of motion of a particle in an electric and magnetic field?
1
How to determine radius of curvature of cycloid using centripetal acceleration?