Time between collisions and collision time

I’m having a hard time really getting how the relationship between pressure and square mean velocity of a gas is derived for one single reason...seems like I don’t really know what impulse is.

From what I know force is the rate of change of momentum I.e Impulse/Time of collision.

I understand that that might be true by the formula since In this time between collisions the particle hits the wall once and thus changes momentum once in this time interval...But it just doesn’t seem right to me. Could we just then take any time interval during which the momentum of a particle changes once and then calculate force as this change In momentum divided by the arbitrarily chosen time interval ? 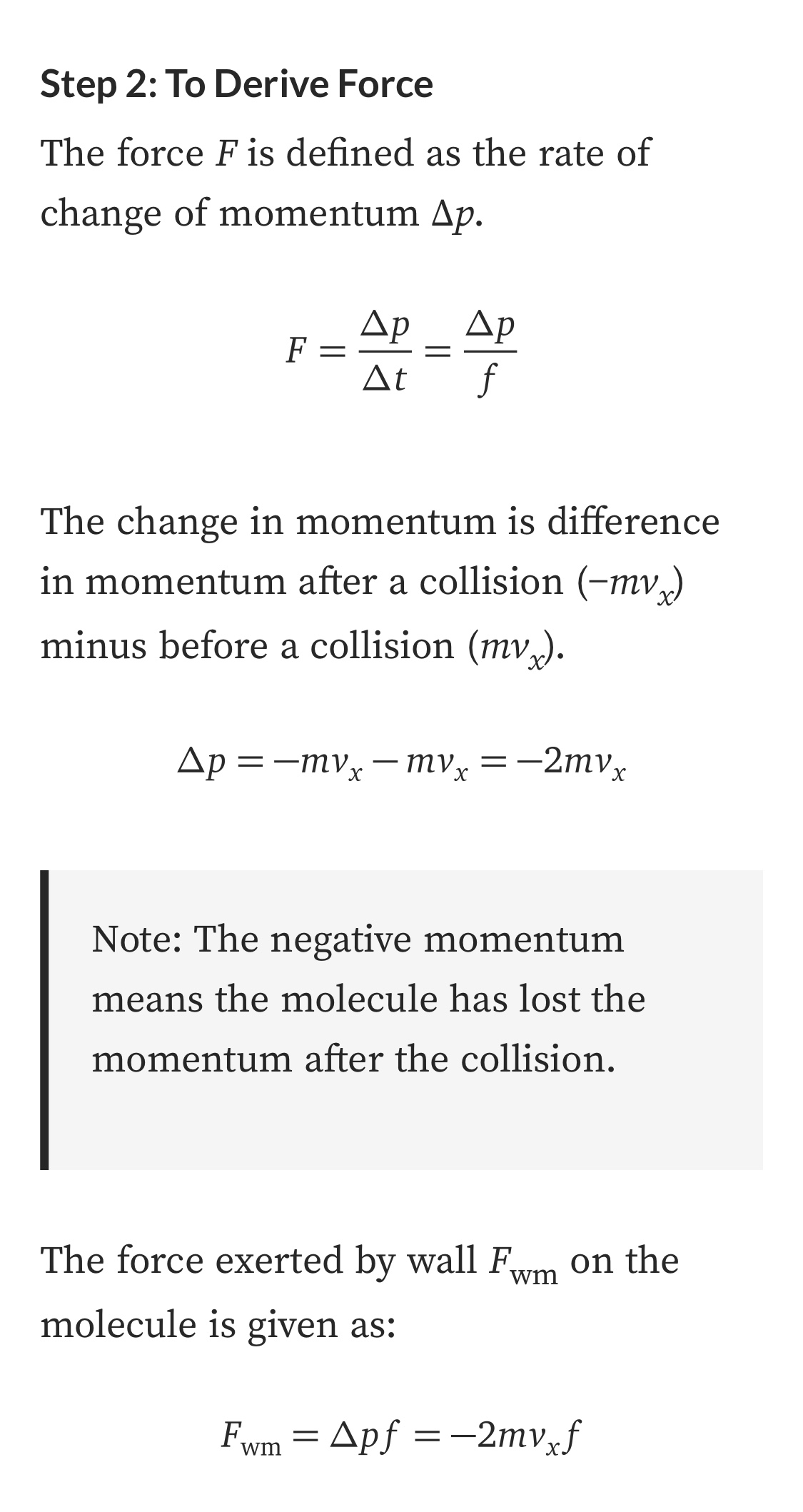 The interaction time during the collision turns out not to matter.

In most other "physics problems" calculations, we only care about the force during the interaction or collision. So the length of the collision is important.

But here we want the average force over time (meaning across multiple collisions). This average means we don't care about the forces in any single collision, just the total impulse from each, and how often they occur.

Let's imagine someone dribbling a soccer ball on their leg. The ball moves slightly, but overall is about the same height over time, suggesting that the average acceleration is zero and that the average force over time on the ball is zero.

Let's assume the ball has a weight of 5N, so the average force from the leg must be 5N. $F = \frac{\Delta p}{\Delta t}$ If the person is dribbling by hitting it once every second, we know the impulse delivered every second is sufficient to generate an average force of 5N over the entire second.

The force during the interaction will be much higher, but isn't necessary to know.

Could we just then take any time interval during which the momentum of a particle changes once and then calculate force as this change In momentum divided by the arbitrarily chosen time interval ?

Yes, but for a continuous process (bouncing a soccer ball or molecules bouncing off walls), the time interval during which the momentum changes exactly once is not arbitrary. It's determined by the periodicity of the event. We can't use 1 second for the soccer ball if the person is dribbling the ball more slowly than that.

You can use any interval you want, but you have to count the total impulse delivered during that time. If there are two collisions in that interval, then each will presumably deliver half the impulse. Setting the interval to one in which there is only one collision is just a convenience. Twice as long, twice as many collisions, twice as much impulse. But total impulse divided by time remains constant.

Like when you say the average acceleration of the ball over time is zero...Why... ?

Because the ball remains in front of the dribbler. If the ball had some consistent acceleration, it would move away. It was just an explicit statement so that we could compare the weight of the ball (pushing it down) to the impulse delivered by the leg (pushing it up). Over the course of the session, these two must be almost exactly equal.

Not the answer you're looking for? Browse other questions tagged thermodynamics statistical-mechanics ideal-gas gas or ask your own question.

2
Difference between collisional and collisionless Boltzmann equations?
1
Oblique collisions in classical gas
1
Relation between particle numbers and collisions between gas molecules inside a closed container
0
Why we take time between consecutive collisions on the same wall in derivation of pressure exerted by ideal gas on container by one molecule?
0
Why is the time $\frac{2L}{v}$ in the derivation of $P=\frac{Nm\langle v^2\rangle}{3V}$
0
Elastic collision of a ball against a container wall