Why do clocks measure arc-length?

Apologies in advance for the long question.

Here is how I would attempt to justify this fact in special relativity with $g_{\mu\nu} = \eta_{\mu\nu}$. Consider an inertial observer $O$ in $\mathbb R^{3,1}$, and suppose that this observer sees a clock, which I'll call observer $O'$ moving around on a curve $x^\mu(\lambda)$. If $O'$ were also an inertial observer, then given any event with coordinates $x^\mu$ as measured by $O$, observer $O'$ would measure the coordinates of the event to be $x'^\mu = \Lambda^\mu_{\phantom\mu\nu} x^\nu + x_0^\mu$ for some Lorentz transformation $\Lambda$. If $O'$ is not inertial, then this is no longer true, and there is some more complicated family of transformations, say $T_\lambda$ between events as seen by both observers.

How do others feel about this argument?

I'm not completely comfortable with it because of the assumption $(\star)$ I made on $T_\lambda$.

I imagine that in GR a similar argument could be made by invoking local flatness of the metric.

I think it's obvious from the pic: 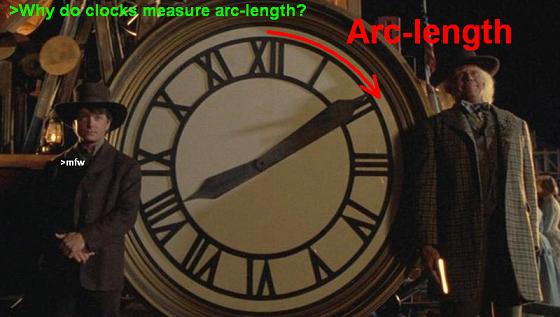 (My secondary argument would be that the integral is the parametrization-independed geometrical measure, minimizing the energy functional and thus being the natural generalization of the flat case time translation. You often encounter these exponential maps in dynamics, here given by the Geodesic flow. Locally you can flatten out the metric to obtain $g(x)=\eta+O(x^2)$ and try to find a limit of smaller and smaller patches. But this really is equivalent solving the geodesic equation, which should be viewed as giving the spacetime direction of the moving object as it's pushed through spacetime. It is also equivalent to minimizing the curve between the points, as motivated above.)

[This is now a long answer. In summary, generally you need a physical assumption, the clock postulate, which people tend to omit, but is necessary, and can't be argued for a priori. However sometimes special relativity plus a restricted version of the postulate suffices. Mundane experience is sufficient to verify this restricted version.]

As for [A2], it is a bit opaque, but what it says that if you're not moving too fast relative to an inertial observer, your experience of time is almost the same. This doesn't follow logically from anything in particular, it's just a physical assumption. But note that special relativity is so hard for many people to accept precisely because [A2] is a fact of life, for reasonably small $\epsilon$. To make it true for even smaller $\epsilon$ requires more than everyday experience, but it is still "common sense", and presumably testable to quite small values.

Now, to believe it literally for arbitrarily small $\epsilon$ requires quite a leap, but don't take differential equations literally.

(Added:) Aha! I found the clock postulate for accelerated observers, and I do believe [A2] is interchangeable with it. And yes, it is often omitted but cannot be derived from other assumptions. It has been tested.

(Second addendum): Even though they're interderivable, mine is better :-) I've given the accuracy of [2] directly in terms of the accuracy of [A2]. For example, we don't need the full clock postulate for the twin paradox (which you mention as a motivating example in a comment):

Now, even with mundane accelerations, the twin paradox can produce a sizeable mismatch in ages within a human lifetime. (Besides, if they're not survivable accelerations, the travelling twin's lifetime ends!) So, there's a usable $a_{max}$ for [A1']. And, mundane experience alone proves [A2] up to that $a_{max}$ and down to fairly small $\epsilon$. So [2] holds sufficiently accurately to give the twin paradox. We only need special relativity plus a mundane restricted clock postulate.

(I realise you can bypass the whole acceleration question by altering the paradox so that there are three inertial observers who compare clocks as they pass. But then it's not the twin paradox anymore, duh!)

I definitely thing this question is much simpler.

It is an a priori assumption upon which GR is built, that this quantity shall be independent of the observer:

that is, two different observers shall measure the same spacetime interval between two infinitesimally close events.

On the other hand, the $x^0$ coordinate of any observer is by definition the lecture in his rest clock, (times $c$ or not, times $+1$ or $-1$, all depending on every modern author's bad taste).

Since the clock of the moving observer is at rest with respect to his proper reference frame, he measures no variation in the spatial coordinates, i.e. $dx^1=dx^2=dx^3=0$. Therefore, as measured from the moving observer, $$ds^2=g_{00}dx^{0}dx^{0}$$

That is his proper time (squared) because $g_{00}=\pm 1$ (the metric of a free falling observer is locally flat). Since $ds^2$ shall be the same for both observers, then the lecture on the free-falling clock equals the spacetime interval measured by the distant observer. That's all.

Now, if you prefer so, you may rewrite the $dx^{\mu}$ as functions of a variation in the parameter $\lambda$ describing the curve, and integrate along that curve, in order to arrive trivially at the expressions in your question.

I don't mean that the other answers are wrong, but merely that this is a straightforward result from the original theory, as exposed very early by Einstein himself in the Princeton lectures of 1921, that doesn't need much mathematical sophistication or additional postulates. Einstein wanted to extend the invariance of $ds^2$ from Special Relativity, to the realm of non-inertial observers. In his effort to find how $g_{\mu\nu}$ had to be for that invariance to hold too in the presence of acceleration/gravity and curved coordinates, he then used parallel transport to arrive at the geodesics equation. That is why the geodesics equation was a postulate in the early formulation of GR (the next step was to relate $g_{\mu\nu}$ to matter/energy, and that is why the Field Equations with the Einstein tensor is the other postulate of the theory, but that is another question)

I think I remember having read somewhere, that the geodesics is no longer a postulate, because it can be derived from the Field equations. I would be thankful to any user that provides the corresponding reference. In 1921, however, it was a postulate.

This Einstein's early exposition of GR of the Princeton lectures is of a raging beauty, full of fresh insights and brilliant heuristic thinking. I don't know why it is almost systematically ignored in every standard GR bibliography.

Now, if I am wrong and this question is not so naive as it seems, I hope that someone points out where I am wrong and what I am missing, so that I learn something new.

I think the assumption that an object can be treated as moving inertially along small portions of its worldline is unjustified. It merely clumps the continuous acceleration into instants of infinite acceleration at discrete points on the worldline. The acceleration is still there and you still need to show that it has no effect on the clock.

Also, I think the argument's conclusion is incorrect. For example, a pendulum clock measures a nontrivial function of the arc length and extrinsic curvature of its worldline, but we still call it a clock. Of course, you could argue that it shouldn't be called a clock, but that seems circular since there's no obvious reason to deny it clockhood except that it doesn't measure worldline length.

The physical content of the claim that clocks measure worldline length is just that worldline length is a measurable quantity. The measurability of (differential) metric distances is a fundamental assumption of general relativity. To say that a timelike distance is measurable is to say that there exists some sort of device that can measure it, at least in some idealized limit, and we call such devices "ideal clocks", or just "clocks" if that's unambiguous in context.

In short, I think that the statement "clocks measure worldline length" is just a definition, and the physical assertion underlying it can't be proved because it's simply an assumption of the theory.

The formalism you've put together to solve this is known as "instantaneously comoving" observers/coordinates, and it's perfectly valid. It's one way to build up the Rindler coordinate system.

Once you have this formalism built up, the transition to GR is probably conceptually most straightforward using the vierbein. Then the transition from the last equation in the question to the original GR form is just a coordinate substitution/change of variables in the integral.

0
How to measure time in presence of a strong gravitational field?
1
"Measure of time in general relativity"
11
Do clocks really measure time?
3
Traveling between two planets at rest to one another
3
How can we measure time?
2
Do clocks measure conformal time (new argument)?
3
Can we derive the relation between proper time and the spacetime interval?
0
Why should we believe in clock hypothesis?
1
When do we say that a given clock could be further corrected?
1
Difference between Gullstrand-Painlevé (GP) time coordinate and proper time $\tau$
See more linked questions

4
Confusion about reading of clock as seen from different inertial systems
1
When the $x^0$ coordinate represents time in GR?
6
Definition of observer and time measured by different observers in general relativity
3
What is the definition of time in General Relativity?
0
What is the physical interpretation of the equation for the invariant interval in general relativity?
0
Special Relativity: How do observers measure distance?
0
Confusion about the proper time interval along an arbitrary worldline
0
Calculating proper time from different perspective and obtaining different results
6
Why is impossible to synchronize the clocks , along a ring globally on a uniform rotating disk?
2
Clock in gravitational field