I'd like to clarify a few things about Schwarzschild spacetime that I couldn't find answers to in other questions or in the books. For reference, here is the usual diagram in Kruskal coordinates: 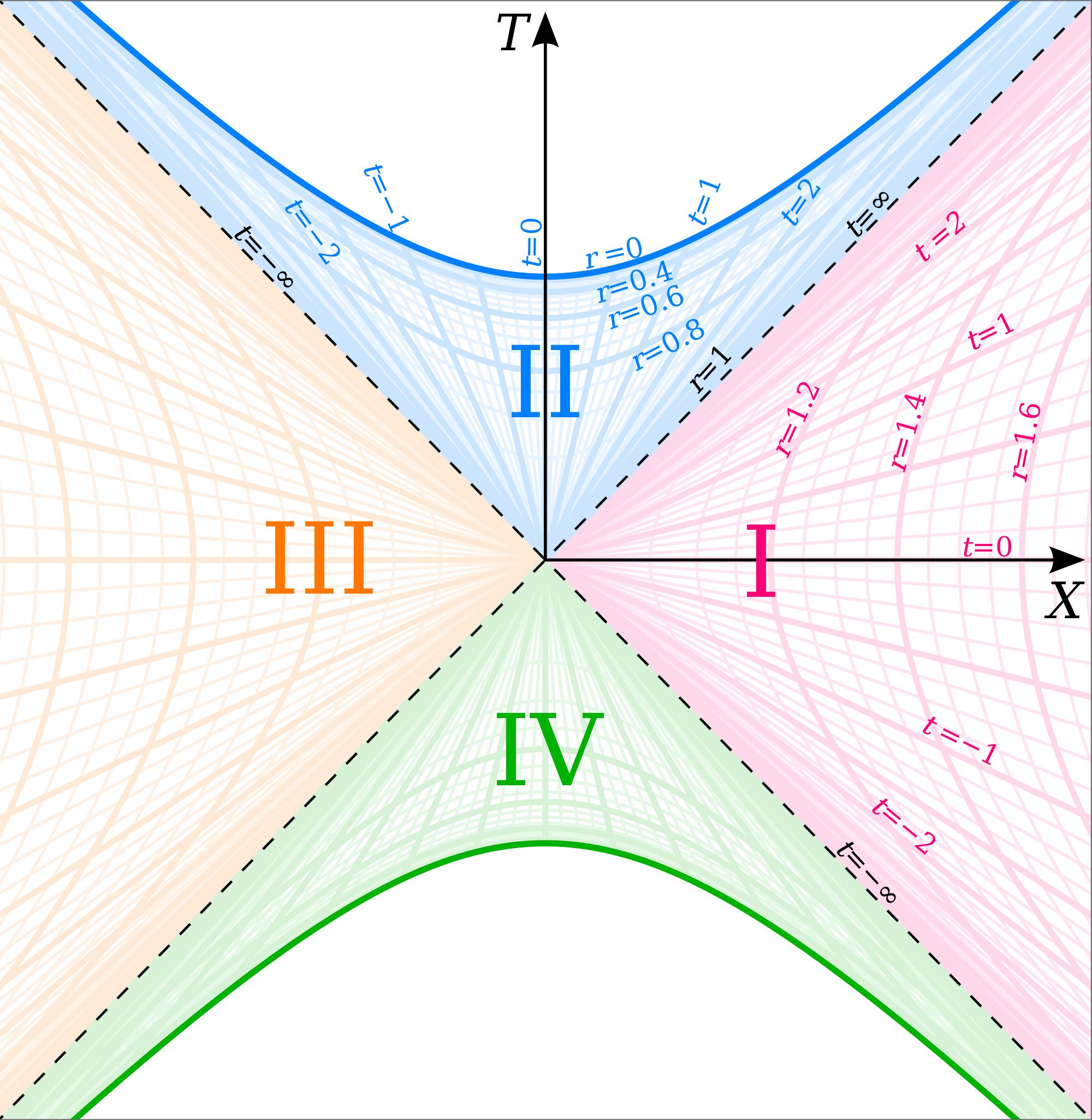 To me it seems incorrect because for any (time-like) observer, there is no way to have both regions II and IV inside the same half of his light-cone or in space-like section orthogonal to the light-cone.

What's going to happen in region III in this case? Since I and III are connected via singularity in I and IV, it would seem that perturbation of singularity by the infalling shell should "propagate" (not casually, ofcourse!) to III. So for every motion in I there should be a corresponding motion in III meaning these regions are not independent?

1) There is indeed in the Kruskal diagram both a black hole and a white hole. Here it pays to heed to the definitions. A Black Hole is a region of the spacetime such that all future-directed timelike curves are contained inside the region itself. The intuition is that a Black Hole is a region such that once you enter it all possible futures are inside it. A White Hole is just the time reversal, i.e. a region such that all past-directed timelike curves are contained in it. The intuition being a region where once outside you cannot go inside. Using this definitions indeed one can see that II is a black hole, a region where and observer inside I can only send information in, and a white hole at IV, a region that only send information to observers at I.

I think your confusion stems from trying to imagine black holes and white holes as strict objects. When you look at the definition you note that it involves all timelike curves of some sort, therefore a Black (white) Hole is a global concept in a spacetime and no amount of local measurements can detect where one is, in this sense it is not an object in the usual sense. Another way of seeing this is that both singularities are not a point in space, but a point in time. In the very same sense that the Initial singularity in the Big Bang model is not any point in the universe, but a time in the past.

2)Your experiment is very reasonable. Indeed there is no unique global time function covering both I and III, yet they are connected via II (and IV). Your query actually has two distinct answers. The first one would be mentioning that the Kruskal coordinates are obtained via analytical continuation past the singularity. Although a legitimate mathematical procedure it is known that singularities are not stable under small perturbations, so if you had a small mass in region I what we expect is that neither regions III or IV would be connected anymore, so all spacetime would look like just I and II. In Kerr spacetime this is even more important, because there the singularity is a ring and Kruskal like coordinates furnish closed timelike curves, i.e. a time machine. So in real life there is no chance of a spacetime that looks like Kruskal and you would only get a ordinary black hole and region I.

The second possible answer is to take very seriously your observation that while I and III are causally disconnected they must share some sort of connection since the black hole at II is influenced by both, so whatever happens at II must have similar causes in both I and III. Matter of fact the same reasoning holds true to the white hole at IV. If you insist in having the entire Kruskal space then your are forced to have regions with no causal connection but all mater inside region I must be strongly (maximally) correlated to region III. Congratulations, this is (a very basic argument for) the ER=EPR conjecture that made at lot of waves half a decade ago.

Not the answer you're looking for? Browse other questions tagged general-relativity gravity black-holes or ask your own question.

5
Asymmetric Schwarzschild solution - unequal mass on each side
2
When do you see the second horizon as you fall into a black hole?
5
Does the maximally-extended Schwarzschild horizon see the entire past of the parallel universe?
0
Interior material and spacetime of a black hole described from outside
2
Kruskal Solution to Black hole
1
Schwarzschild black hole spacetime in Kruskal-Szekeres coordinates
1
Is my interpretation of these observers correct in General Relativity?
3
Is there some physical interpretation of the parallel exterior region?
1
Is the Schwarzschild wormhole (Einstein-Rosen Bridge) time dependent?
1
Time reversal in Region III in the Kruskal-Szekeres coordinates