I'm having trouble understanding what constitutes a reference frame in general relativity as there seem to be several contradictory definitions.

It is my understanding that, in special relativity, any event in $4D$ spacetime may be described in any reference frame (except in degenerate cases such as when acceleration generates an event horizon). That is, if the coordinates of some event are known to be $(\mathbf{x}, t)$ in some frame $S$, then there almost always exists a transformation $\mathbf{x}'(\mathbf{x}, t)$, $t'(\mathbf{x}, t)$, which expresses the coordinates in some other frame $S'$ in terms of those in $S$. In this way, a reference frame in SR is made up of a rigid structure throughout all of space, which has a clock affixed to every point - this allows the coordinates of every event to be measured. 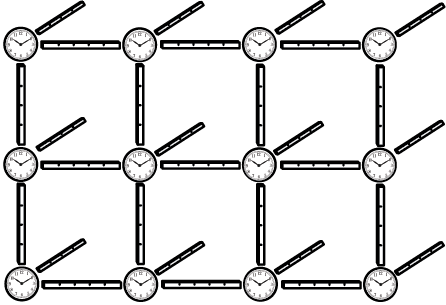 In a similar manner, in $\S83$ of The Classical Theory of Fields, Landau and Lifshitz describe what a reference frame is in GR:

[Systems of bodies at rest relative to one another] do not exist in the presence of a variable gravitational field, so for the exact determination of the position of a particle in space we must have an infinite number of bodies which fill all the space like some sort of 'medium'. Such a system of bodies with arbitrarily running clocks fixed on them constitutes a reference system in the general theory of relativity.

I can make sense of the above. However, I have found a number of sources which give very different descriptions of what a reference frame is in GR. For example:

My confusion basically arises from (1). If it is impossible to measure anything in another frame, then how can we measure the distances of other galaxies etc? I also don't understand what the definition given in (2) means physically.

Sorry for such a rambling question! I've tried to be as succinct as possible and I would greatly appreciate it if somebody could help to clarify this for me.

There's a variety of concepts which are mostly similar in special relativity, but are more nuanced in general relativity.

First, there are coordinates. Coordinates are the points in the coordinate patch, in the domain $O \subset \mathbb{R}^n$ of a manifold's chart $\phi$, and given the inverse of our chart, we get the spacetime point of our manifold, $\phi^{-1}(t, x, y, z) = p$.

Then there are frames. A frame at $p$ is a set of linearly independent vectors $\{ e_a \}$ (ie, a basis) of the tangent space $T_pM$ that span the entire tangent space. As with other basis, we call it orthonormal if $\langle e_a, e_b \rangle = \pm 1$. For a given set of coordinates, you also have the frame given by the coordinate basis, which is the tangent vectors of curves of one coordinate only.

A frame field over $U \subset M$ is a smooth choice of frames. That is, we have $n$ vector fields $e_a(p)$ that are all smooth and at every point $p$, they form a basis.

We can also define frames for observers, in which case that is much the same notion as a frame field, but the $n$ vectors are smooth along the curve defined by the observer.

And finally there are physical measurements you can perform to actually determine times and distances. To give you some more intuitive notion of frames, take an observer. An observer can locally have its own frame (imagine that it's some probe with three orthogonal axis). One common method of getting the coordinates of other points is the radar method. First, take your three axis to convert them to spherical coordinates, shoot a light beam at time $t_1$ in direction $(\theta, \phi)$. The point $q$ you're shooting at reflects the light beam back at you, and it arrives at time $t_2$. The event $q$ is then given the time coordinate $(t_2 - t_1) / 2$ and the distance $c (t_2 - t_1) / 2$. Using this distance, you can if you wish convert it back to "Cartesian" coordinates. A frame at $q$ can then be defined by varying those coordinates around.

In special relativity, all of those notions are, while different, somewhat interchangeable. If you have the cartesian coordinates $(t,x,y,z)$, the frame $\{ e_t, e_x, e_y, e_z \}$ they define is an orthonormal frame, and translating this frame around gives you a frame field. Given an inertial observer, the radar coordinates, using light shot using the local observer frame (ie the one on the line $(t,0,0,0)$), give back the proper coordinates, and translation will produce a frame field which is also the appropriate frame for all comoving observers. A Lorentz transform will apply to all frames in the frame field, so that comparing the frames of different inertial observers is easy (please note that all that I've said apply to inertial observers. Even in flat space, things get complicated with accelerated observers).

In general relativity, things are trickier, though. Given a local frame at $p$, you can always get all of this locally, thanks to convex normal neighbourhoods. An observer can generate a local basis, with all the clocks and rods he needs, which can be orthonormal at $p$. You can then define a unique frame field by parallel transport of the frame at $p$ along the unique geodesics, and coordinates stemming from that local frame by taking the parameters of the basis, ie, if you have a vector $v = v^i e_i$, then the point $q = \exp_p(v)$ has the coordinates $v^i$ (please note here that the basis at $q$ that we defined may not be the coordinate basis in those coordinates, and in fact it will not be unless the spacetime is flat). And for an appropriate neighbourhood, called a radar neighbourhood, getting those coordinates via the radar method is possible.

First bad news : comparing the frames of different observers is no longer a trivial task here. To convince yourself of this, take three close-by observers (all are within their own convex normal neighbourhood), $\gamma_1$, $\gamma_2$ and $\gamma_3$. If we could simply define a frame of $\gamma_2$ by the parallel transport of $\{ e^1_a \}$, then we could also do so between $\gamma_2$ and $\gamma_3$, and $\gamma_3$ and $\gamma_1$, eventually getting back the same frame, but what we have just done is a loop of parallel transports, and therefore the end result will, if the metric is curved, not coincide. This is true even if we take the closest equivalent of inertial observers, by having unaccelerated observers (part of the issue is that we can't have those observers have the same velocity since we can't compare distant velocity vectors).

Things get more complex from here, though. We define convex normal neighbourhood because all those nice properties may fail outside of them. A typical example is that a point may have two different geodesics, even of same length, connecting it to $p$. The classic example is the sphere, where the two poles are connected in every direction by a geodesic of identical length. This is the cause of gravitational lensing and, on a more concrete case, can lead a point to have more than one radar coordinates. If we tried to define a frame at that point by parallel propagation, we wouldn't be able to do it, since there is no unique geodesic to guide us.

If we go on a more mathematical route, things are even worse : there are no nowhere-vanishing vector fields on the sphere, and therefore we wouldn't be able to define any frame field globally at all. Many manifolds do not admit such a global frame, but we are mostly in luck : if you assume that our spacetime is nicely behaved (ie it has a topology $\mathbb{R} \times \Sigma$, where $\Sigma$ is the spatial part, and $\Sigma$ is orientable), then for $3+1$ dimensions, spacetimes always admit such a global frame field, although they may not stem from measurements directly.

a reference frame in SR is made up of a rigid structure throughout all of space, which has a clock affixed to every point

Yes -- this certainly captures a variant of the notion "frame of reference" which I understand and like to address in the following. Let me first of all extract and summarize the

Principal requirements of a reference frame

Consistent with each reference frame separately, and with their relations between each other, there can be a geometric structure associated with the given spacetime region (set $\mathcal S$ of events) itself; especially in terms of (ratios of) Lorentzian distances $\ell : \mathcal S \times \mathcal S \rightarrow \mathbb R^+$.

Relations to other notions of reference frame

the coordinates of some event [...]

The notion of reference frame laid out above is obviously manifestly without involving any coordinates. However, the assignment of coordinates (i.e. n-tuples of real numbers, $\mathbb R^n$, or subsets thereof), uniquely one each to any one member of a reference frame, and (often in terms of "the $t$ coordinate" component of the n-tuple) distinctly to each event, may be of broader interest.

Not the answer you're looking for? Browse other questions tagged general-relativity spacetime reference-frames metric-tensor coordinate-systems or ask your own question.

8
How do frames of reference work in general relativity, and are they described by coordinate systems?
10
How one uses the definition of observers in General Relativity?