A simplistic question about virtual particles

Please understand, I am not a scientist. My understanding of "nothing" is that virtual particles are constantly springing into existence on borrowed time and borrowed energy. Almost instantly annihilating each other giving back that borrowed energy.

But could an event happen such as 2 antimatter particles appearing near enough to each other to repel each away from their normal matter virtual particle, thereby stopping the annihilation from happening?

Is there any mechanism that would prevent virtual particles from annihilating each other? If so, what? If not, why?

Virtual particles are a mathematical term, which appeared in the language of physics in the crossection and decay calculations using Feynman diagrams .

These diagrams are a pictorial representation of integrals to be carried out over the limits of the particular study. For example the following diagram

allows to write the exact integral for the first term in the pertubation mathematical series for the crossection of two electrons interacting.

The trouble that gives the misconception you have in your questions start when higher order diagrams in the pertubation series are calculated , to increase the accuracy of the prediction. Such diagrams have loop corrections some from the vacuum 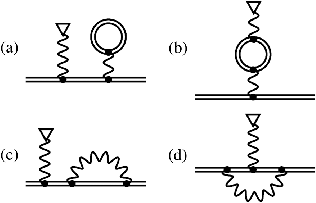 Furry-picture Feynman diagrams depicting the one-loop QED corrections to the bound-muon g factor: (a) the electric and (b) magnetic loop vacuum polarization corrections, and (c) the selfenergy wave function and (d) self-energy vertex correction terms. A double external line represents a muonic Coulomb-Dirac wave function, and the wave line terminated by a triangle stands for the interaction with the external magnetic field. An internal wave line represents a photon propagator, and an internal double line depicts a Coulomb-Dirac muon propagator; in vacuum polarization loops, it may also represent an electron-positron propagator.

These diagrams are added to internal lines (i.e. virtual, off mass shell) in the first order feyinman diagrams to generate the diagrams that will give corrections to the first order calculation.The missuse of vacuum polarization comes from the naive supposition that these loops exist intependent of input particle and output particle energy and momentum, real particles on mass shell.

For a diagram to have a breaking virtual loop giving real on mass shell particles coming out, taking energy and momentum from the initial incoming real particles , a new diagram will need to be calculated with more outgoing real particles.

To come to Hawking radiation which is illustrated by breaking virtual loops, a correct feynman diagram representation should include the virtual exchange of a graviton with the black hole's gravitational field, and that is why hawking radiation diminshes the black hole. Real energy has to be fed for a virtual loop to stop being a mathematical construct and break into two real particles with on mass shell four vectors.

But could an event happen such as 2 antimatter particles appearing near enough to each other to repel each away from their normal matter virtual particle, thereby stopping the annihilation from happening?

The annihilation is virtual, within an integral which means that "near enough" has no meaning, as the variables of the integration are continuous. What you describe would need different diagrams showing vertices with interactions between loops ( a much higher order diagram than shown above) but the effect would be in the interaction studied between real incoming and outgoing particles, with their four vectors on mass shell.

Is there any mechanism that would prevent virtual particles from annihilating each other? If so, what? If not, why?

One can imagine the vacuum filled with annihilating virtual loops, but mathematically and for calculational purposes energy has to be supplied from some real on shell particles for the vacuum loops to be more than an imagination.

You should read up on Hawking radiation. Here due to quantum fluctuations a pair of particle-antiparticle is formed near the event horizon. Normally the two would almost immediately annihilate. In the particular case of Hawking radiation, one of the pair falls into the black hole and the other one escapes, thus becoming a 'real' particle. This also causes the BH to slowly lose energy.

Not the answer you're looking for? Browse other questions tagged particle-physics vacuum virtual-particles or ask your own question.