Is there a way to take randomly-directed photons and deliver them in a parallel manner?

What I'm asking about is a sort of filter that adjusts the direction of propagation of photons hitting the filter so when they pass through they all have the same vector. This is a simple sketch to illustrate the idea. 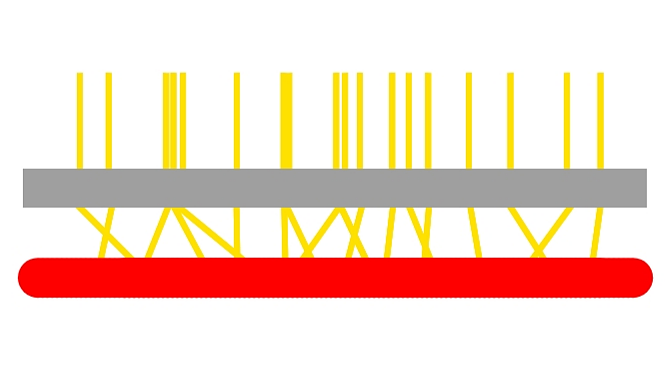 Is it physically possible? Is there perhaps such a technology already?

This configuration is forbidden even in classical geometric optics; you don't even have to think about photons at all, it's impossible for light rays in general to behave in the way that you describe.

The reason is summarized in the following question: What happens if you run your apparatus in reverse? With a normal passive optical device, like a lens, there is a one-to-one correspondence between the direction of the output ray and the direction of the input ray. This means that, for every possible input ray there exists a unique output ray, and conversely it means that you can always reconstruct the input ray that created a particular output ray. This means that, for a valid passive optical device, you can always run it in reverse with no problems.

But for your device, all of the output rays come out in the same direction. How do you know which direction the input rays came from? You can't actually invert the function that takes an input ray to an output ray, so it can't be a valid passive optical device.

For your device, the input has both a finite area and a finite solid angle spread (since rays come in from random directions). However, the output has a finite area and zero solid angle spread (since output rays are all in the same direction). This means that your device can't be passive - optical power is not conserved, so there has to be something supplying power to manipulate light in this way.

You can also see this qualitatively from a thermodynamic standpoint. Assuming that the energy distributions of the input and output photons are the same, and you only change their direction, it's clear that the output photons have a lower entropy than the input photons (since they aren't random in direction anymore). By the Second Law of Thermodynamics, you can't have a process that decreases the entropy of the universe, so your device has to increase the entropy of its environment, which usually involves waste heat or something similar.

So it's clear that you can't build a passive filter that does this. What you can do, however, is approximate this filter: you can certainly build a device that collects light from random directions and redirects it into a cone of directions close to a particular vector. Precisely how close you can get is limited by conservation of etendue: if your input has an area $A_{in}$ and each point on it can accept light from a solid angle $\Omega_{in}$, then the solid angle around your chosen vector $\Omega_{out}$ is only limited by the area of your output:

Such technology exists for X-rays used for imaging purposes. X-rays are a good demonstration of photons getting collimated into a beam, for example here

For visible light putting the source at the focus of a lens will give parallel rays going out. Photons will be bound by the topology of the classical beam.

The suggestion made in a deleted comment of using a laser if a parallel beam is needed, is efficient in energy use, and simple.

How about a reflective cone that collects the randomly oriented rays onto a small diffuse object which you place at the focal length of a lens? Maybe not very light efficient.

2
If the EM Spectrum makes up all frequencies what is the connection between Photons and Electrons in electronics, mainly in RF Propagation?
2
How does light filtration work?
1
Shooting a single photon (possible nowadays) will cause it to be the excitation of both Electric and Magnetic fields at the same position?
1
Why does light keep it's direction when passing through glass?
10
Why doesn't incoherent light cancel itself out?