I have around 200 barometers (altitude up to 200 m above sea-level) of which some in direct sunlight that can become relatively hot. I am investigating whether there is any relation between measured air pressure and temperature.

Since some barometers also measure temperature, I was able to make the following plot: 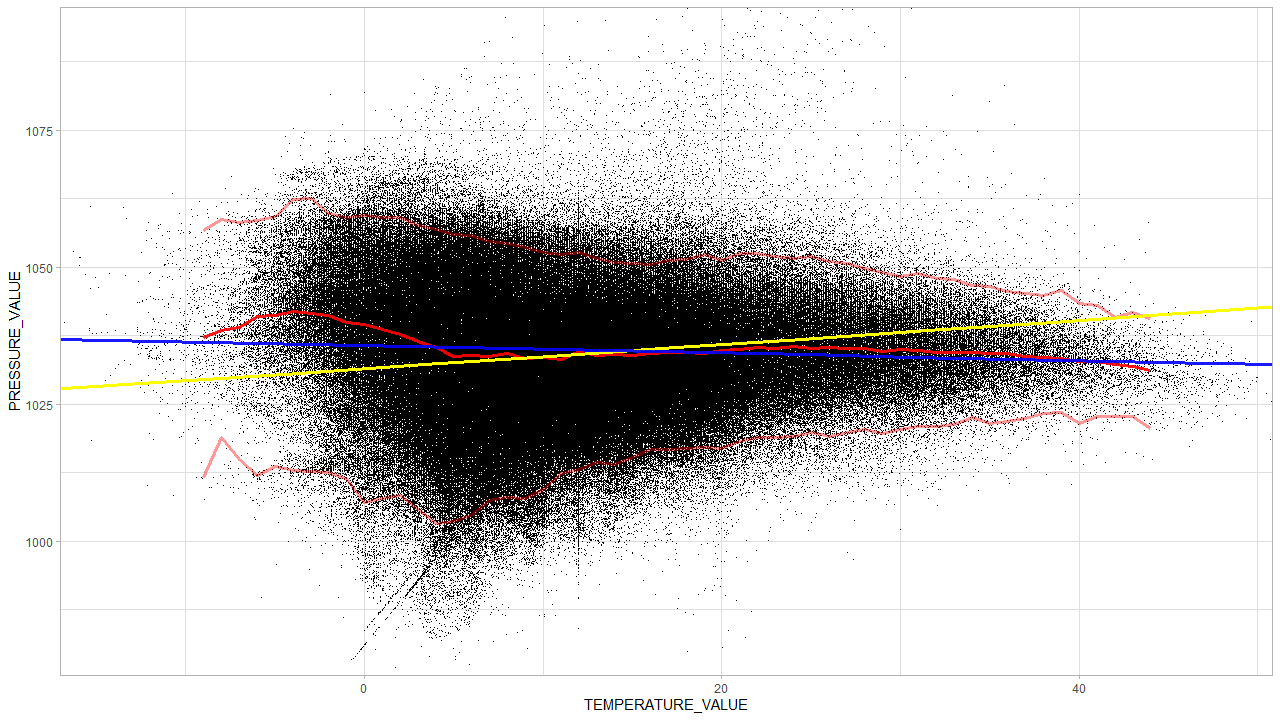 Air pressure is measured in cmH2O and temperature in °C.

Based on 0.5-quantile (i.e. median) regression (blue line in the plot) I get the following coefficients

which suggest a drop of 0.068 cmH20 per unit °C of temperature increase.

Note that quantile regression is used to mitigate the effects of outliers caused by broken barometers.

Now my question is whether this result can be backed by theory? Most obvious starting point is the ideal gas law which can be written in the following specific form:

where $R^*$ is the universal gas constant and $M$ the molar mass of Earth's air.

Furthermore, the confusing bit is the fact that $\rho$ also depends on $T$. Thus, as the air gets hotter, it expands and changes the density. This results in upward convection which in turn causes local air flow increase. Both the density and flow speed impact pressure according to Bernoulli's principle.

Which brings me to my question: what is the theoretical correct way to compute the effect of temperature on air pressure around sea-level?

PS I couldn't find any relevant paper on this topic, so paper suggestions are also welcome.

If I assume that $\rho$ depends on $T$ as well, I end up here. Assuming dry air, the density calculation is again based on the ideal gas law, and as such doesn't bring any new information. If I take this information into consideration, then

meaning that increase in temperature will reduce the density, resulting in zero change in pressure.

If instead of dry air, I use the density formula for humid air (90 %) and Buck equation for saturation vapor pressure of water, I end up with -0.0004 Pa.

If you know about some broken barometers, you might possibly remove them from the sampling which is a better way to mitigate their effect.

It might be a good thing to test some barometers. Keep them at constant air pressure and see how their readings change at different temperatures. Make sure that the change in pressure with temperature is not dominated by the effect on the barometers themselves.

How much are your barometers affected by airflow? That is also testable in the lab.

Eyeballing your plot, at first sight it looks unremarkable except that there is a bulge of low pressure at relatively low temperature.

At a second look, if the right number of low-pressure observations were transferred from the 0 to 15 degree area to the -5 to 10 degree area, it might look like there's no effect at all.

I could speculate that there might be different amounts of sunlight when a cold front comes in than when a warm front comes, but that's only speculation.

Not the answer you're looking for? Browse other questions tagged pressure ideal-gas air bernoulli-equation or ask your own question.