How does an event horizon of a supermassive black hole prevent an infalling observer's stretched hand from exiting the black hole?

Suppose an observer $A$ is falling into a supermassive black hole — so massive one that gravitational acceleration at its event horizon is much smaller than that on the Earth's surface. Now, suppose $A$ has slowed down by some rocket engine to a negligible speed by time he's at arm's length from the event horizon (and could touch it if it were tangible), after which the thrust is shut off, so that $A$ is now in free fall. Since there're no spaghettifying tidal forces, he easily stretches his arm (which crosses the horizon without this being noticed) and then retracts it (and low acceleration lets this happen before the whole $A$ crosses the horizon). From the point of view of this observer nothing special has happened.

But to a faraway observer $B$ this arm stretching and retraction should look like entering and exiting a very real event horizon, from which nothing is supposed to be able to return. So the description in the paragraph above must be missing some crucial detail that would make this impossible.

What detail is missed here? What should prevent observer $A$ from retracting his horizon-crossed hand?

A helpful point for all questions like this one is to remember that the horizon is a null surface. The word 'null' here is being used in the sense of null or light-like intervals. This means that from the point of view of an infalling observer, the horizon whizzes past him at the speed of light as he falls in. No wonder he can't stretch his hand back over it!

From B's point of view, there is a huge gravitational time dilation going on, such that everything A does is very slow. As A's hand moves towards the horizon the time dilation diverges, so that the event where the hand crosses the horizon is never registered by B at all. In fact B's whole life is spacelike separated from the crossing event (assuming B does not later fall through the horizon). Thus no signal reaches B from that event. If B were to predict on the basis of observations of the hand approaching the horizon, at what moment it will go through, the answer he finds will depend on how he synchronises his clock. In Schwarzschild coordinates it would be after an infinite amount of time has passed.

More generally, if light-speed signals from a given event never reach B, no matter how long B waits, then one way for B to understand this is to say the event lies on the boundary of the region of spacetime to which he has access throughout his entire existence. The Schwarzschild coordinates do a reasonable job of charting such a region of spacetime. They place the events we are talking about at $t = \infty$.

In the following diagram, notice the light cones outside the horizon: they become parallel to it as they approach the horizon. This means that stuff traveling inwards towards the horizon has a worldline becoming vertical on the diagram as the worldline approaches the horizon (whether the stuff is pushed or is in free fall). 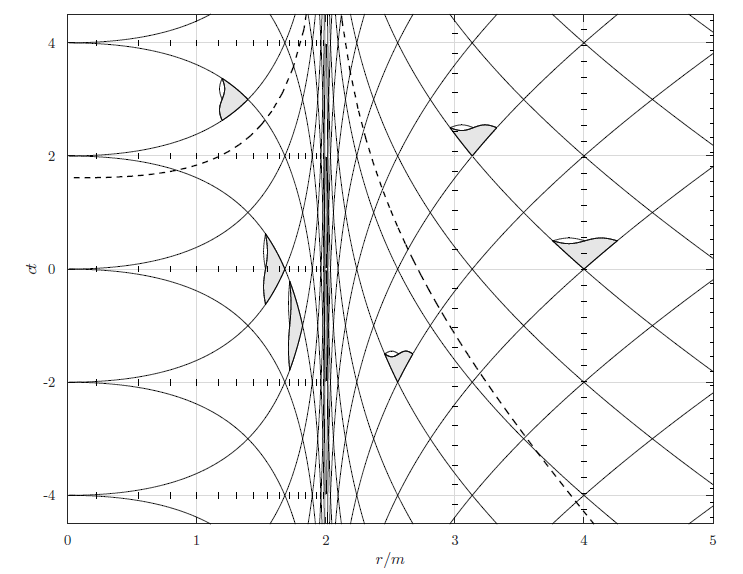 Null lines near a Schwarzschild horizon, plotted in Schwarzschild coordinates. The horizon is at $r/m=2$. The dashed line is a infalling worldline.