How does light get into a stable optical cavity in the first place?

It is supposedly possible to trap a beam of light bouncing back and fourth between two mirrors in a stable configuration. As I understand it, this means the configuration will prevent further spread of the beam angle so it stays between the two mirrors, since it certainly couldn't decrease the beam spread as that would violate the 2nd law of thermodynamics.

Wikipedia has an enlightening section on this, and I found this illustrative, showing the region of stable configurations: 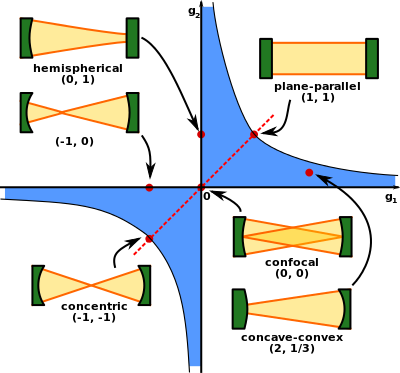 As has come up in other questions, this method has been used by researchers to get beams of light to bounce between mirrors over 100,000 times.

Wouldn't any given photon make it back to the point where it was emitted in the first place? Then, since it's not possible to have a one-way mirror (would also violate thermodynamics), then it would ultimately cause the destruction of the photon because it exits the cavity. That would imply that in order to get 100,000 bounces, the mirror's area would have to be 100,000x the area of the emission point. Is that how it's done? Or is there a better way that researchers have to keep the light in such a cavity from being destroyed at its emission point?

Maybe if you were using a laser, you could let the photon physically go back into the laser and stimulate more emission or bounce off the back wall?

Regarding the question "how to get light into the resonator in the first place":

It is done through the mirrors of the resonator. All mirrors are transparent to a certain degree, e.g. have high reflectivity but also a certain amount of transmittivity (e.g 0.1%).

The amount of bounces is usually only an effective one.

To understand how the number of bounces is measured consider the following: Assume a narrowband light source (e.g. a laser) that shines light onto the back of one of the mirrors. Assume also that the wavelength of this light matches a cavity resonance (that is the cavity length of a multiple of the half wavelength). Assume further that one waits long enough that a steady state is achieved. Since the second cavity mirror is transmittive to certain degree as well, we see also light "leaking" out of the second mirror.

If one now immediately switches off the light source, then one sees a slow decay from this second output (high Q cavities achieve 100 micro-seconds maximum). We dont see an instantaneous turn-off at the output, because the light energy that is stored in the resonator is released "slowly" through the mirrors.

This decay time (or ring-down time) is a measure for the effective number of bounces.

Not the answer you're looking for? Browse other questions tagged optics reflection stability or ask your own question.

0
With a box that has perfect mirrors on the inside would it be possible to trap light?

0
What happens to light when an optical cavity path length doubles instantaneously?
5
What is the longest coherence length stimulated-emission beam demonstrated?
7
Is reflection and refraction the same thing - bouncing of light?
7
What happens at the QM level with a photon hitting a mirror?
1
Can photons oscillate?
1
Inside a car with light bouncing vertically between two mirrors, now if the car starts moving will the light also move with the car?
0
How is it that having a laser cavity geometry with one flat mirror and one curved mirror produces a more divergent beam?