Is constant acceleration not enough for radiation?

A reference source: Does A Uniformly Accelerating Charge Radiate?

Consider the behavior of a DC current compared to an AC current.

Direct current: has locally fast moving free electrons that progress slowly forward. All the zigzag motion cancels except for a small forward distance covered by a non-cancelled acceleration forward. The progress produces a blip of a magnetic field. The summation of blips forms a uniform magnetic field around the wire. But, electromagnetic radiation is absence.

Alternating current: has the same locally fast moving free electrons with the zigzag cancelling motion as direct current. The local acceleration of the direct current can be greater than that of the alternating current. But, now the voltage is constantly changing and the acceleration is constantly changing and electromagnetic radiation is generated.

Experimentally, linear and curved path or orbit radiation occurs. Perhaps the charged particles are locally accelerating and decelerating against each other on a small time scale that produces a blip of electromagnetic radiation which sums to the expected values. This can mean that a single charge under these conditions would be expected not to radiate.

Robert Shuler talks about this figure in the thread Is the principle of equivalence, the starting point of general relativity, a correct assumption?:

"You can see that for uniform acceleration, none of the classic features of radiation can be identified. In particular, since no point is clearly distinguishable from another point, no frequency is identifiable. Effectively, the frequency is zero."

A try at a theory: The smooth constant acceleration field lines do not radiate, but store potential energy like a compressed spring. A change in acceleration releases the energy in the form of radiation. 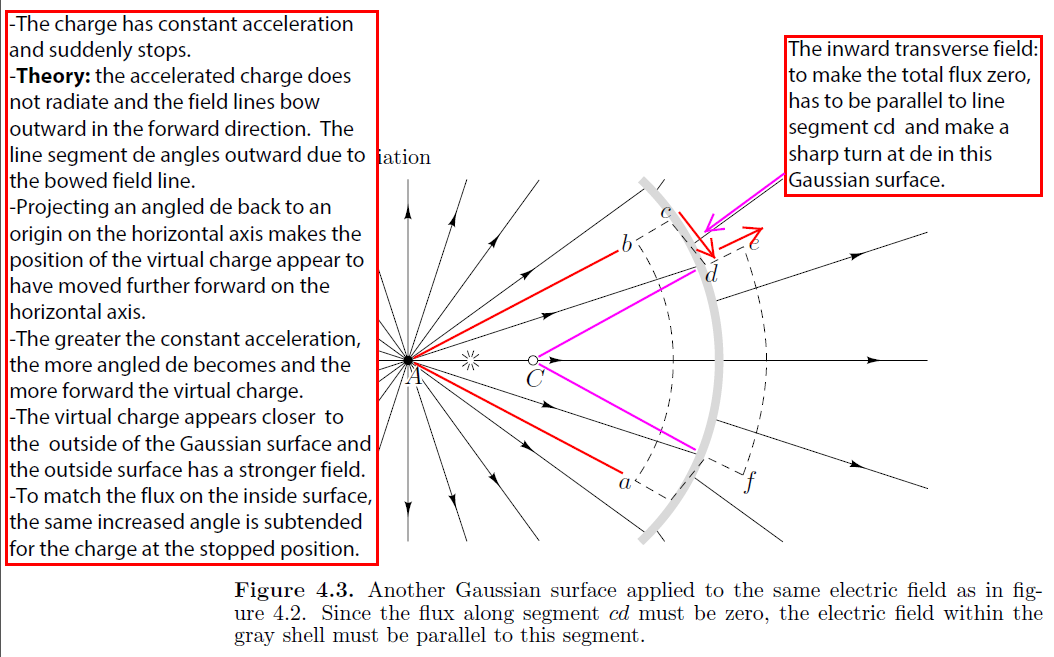 According to the band theory, the effect of an electric field is to increase the occupied states just above the Fermi level for momentum $P$ in one direction.

But after a small increase, scattering processes are always filling back the lower energy spaces of opposite $P$, that were left empty due to the polarization of the E-field.

So, there is EM radiation being produced all the time due to electron acceleration $\frac{\Delta P}{m\Delta t}$, but in the infrared region. It is the Joule effect.

The difference for AC current is that besides that infrared radiation, there is also the acceleration due to the changing of the average electron momentum in the period of the oscillation: $\frac{\Delta P_{av}}{mT}$

Sticking for simplicity to the classical description: any acceleration results in radiation, including constant acceleration (see, e.g., Larmor formula). A caveat here is that the resulting radiation will have a continuous spectrum - i.e., combined of infinitely many waves of different frequencies.

Another thing that is relevant to wires is that the radiation resulting from thermal acceleration-deceleration process is extremely weak in most cases, although there are some notable exceptions, such as an incadescent lamp (see How is light emitted by an incandescent lamp?).

Joule's heating
The radiation emitted is a part of Joule's heating, but shoudl not be equated with it - Joule's heating is the overall energy of the power source lost in the wire - e.g., the energy transferred to the lattices ions, but also the radiated energy (see here for a simple but instructive derivation).

Not the answer you're looking for? Browse other questions tagged electromagnetism electromagnetic-radiation electrons electric-current acceleration or ask your own question.

12
How is light emitted by an incandescent lamp?
-1
Heating effect of electric current

2
Electrons and Magnetism
1
What is meant by "current" in this context?
2
Induced current for conjoined loops in varying magnetic field
2
Does an classical charge that is stationary in a gravitational field radiate?
3
Do accelerated moving electrons radiate electromagnetic energy?
0
Definition of Constant current
2
Current produced by EM wave in circuit
10
Does an accelerating charged black hole emit EM radiation?