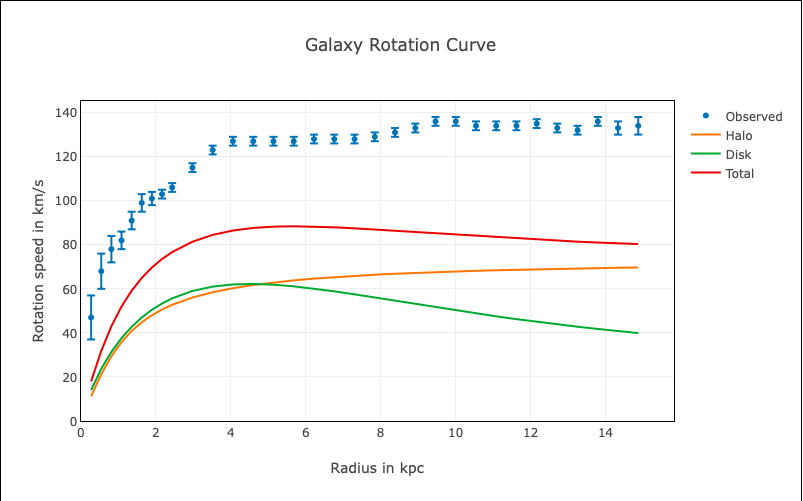 The picture is from this link pages.pomona.edu/~tmoore/RotCurve

The data points are for NCG 2403, my rotation curve is for NCG 224. I want to plot the total (which I drew from my data), halo, and disk rotation curves.

You cannot without additional information - at a minimum, how much lumnosity comes from with radius $r$ in the galaxy studied.

The rotation curve arises from the sum of all gravitating matter that is present in the system.

In principle you can estimate the contribution of the disk to the rotation curve by measuring how much mass is contained within a radius $r$ and then working out what rotation speed at $r$ that would produce. Note, that in your simulation, "disk" refers to the baryonic matter in the disk, whose mass can be estimated by observing how much luminosity it produces and then using an assumed "mass-to-light" ratio. "Halo" refers to the dark matter halo. The mass of this (and its distribution with radius) can only be inferred by adding it to the baryonic matter in order to bridge the gap between the rotation curve predicted by just the baryonic matter and the observed rotation curve.

Having said that - the disk line in the plot is entirely smooth, so it is obviously not showing measurements. It is just a smooth functional fit to some observational data (that isn't shown) that might be modelled in conjunction with the rotation curve.

The purpose of the simulation appears to be to demonstrate how a rotation curve can be modelled by combining the mass distribution present in the luminous matter, with that assumed to be present in a smooth, dark halo.

Not the answer you're looking for? Browse other questions tagged astrophysics dark-matter galaxies galaxy-rotation-curve or ask your own question.