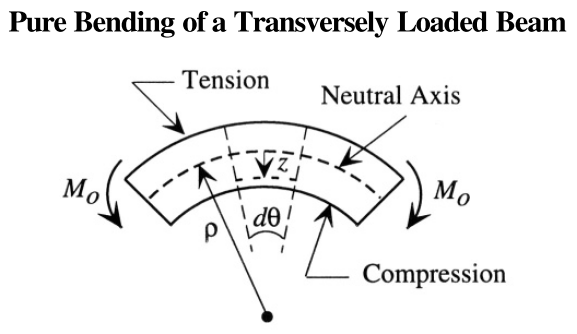 The textbook, where this is from, first walks through how to find the strain and stress as a function of z, which is fairly straightforward. Then, it calculates the "total internal bending moment" like this:

(Here, W is width of the beam, H is the total thickness or height of the beam in the z direction, and $\sigma$ is stress.)

I don't understand what this really means. So far, "moment" has basically meant torque. The condition for static equilibrium is (from Newton's laws) that net forces and net torques must be zero. Torque is defined as the cross product of force vector by position vector. Now, this expression looks like an integral of force * lever arm, where stress * W * dz gives the force acting on an infinitesimal area, and multiplying by z gives you the same dimensions as torque.

Okay, but the problem is that stress is not actually a force. It's a pair of forces acting in equal and opposite directions. Like this: 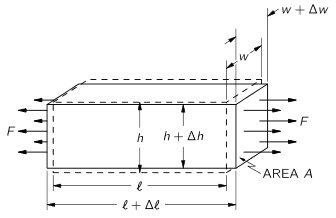 So, at any point in the middle of the material, every atom is feeling equal and opposite forces tugging in opposite directions (or pushing). So, this integral is not the same thing as simply integrating force * lever arm, even though the dimensions are the same. Because at every point, there's no single force acting in a single direction. If anything, the forces cancel out.

So, I don't understand the physical meaning of this integral and this internal bending moment concept.

In order to keep the beam from tipping a force couple $h T$ must exist at the support to counter act the applied torque $\ell P$. This can be viewed as two equal and opposite forces $T$ separated by the height $h$.

This resulting couple $M = h T = \ell P$ manifests itself internally inside the beam also. Try to split the beam at some location $x$ from the support and imagine the internal forces/moments needed to balance the beam. You will find $M(x) = (\ell -x ) F$

This moment is generated by a varying tension along the beam that varies with position $z$ over the central axis. This tension results in the bending stress described by $\sigma_x(z)$. If you slice the cross section by ${\rm d}z$ and add up all the tension contributions ${\rm d}T = \sigma_x (W {\rm d}z)$

The distribution of stress is proportional to the distance $z$ from the central axis. Use the general expression $\sigma_x = K z$

Not the answer you're looking for? Browse other questions tagged newtonian-mechanics stress-strain statics moment or ask your own question.

0
Calculation of a bending moment
1
Influence of couple-moment's position on bending moment diagram
0
Second moment of area
4
Difference between torque, moment and couple
0
Bending moment in a cantilever beam
2
What are the proper definitions of moment, couple, torque, 'moment of force'?
1
Confusion about rotation of a beam due to a couple moment and Newton's 2nd Law
1
Why do internal torques cancel?