I have a question about the mechanism that induces permanent current in a superconductor ring. I'm refering to explanations from this source https://www.wiley-vch.de/books/sample/3527403493_c01.pdf on page 12.

Background: a superconductor aquires it's "special" property (a perfect conductor & diamagnet with $\chi=-1$) after beeing cooled down under characteristic temperature $T_C$. The experiment works a follows: 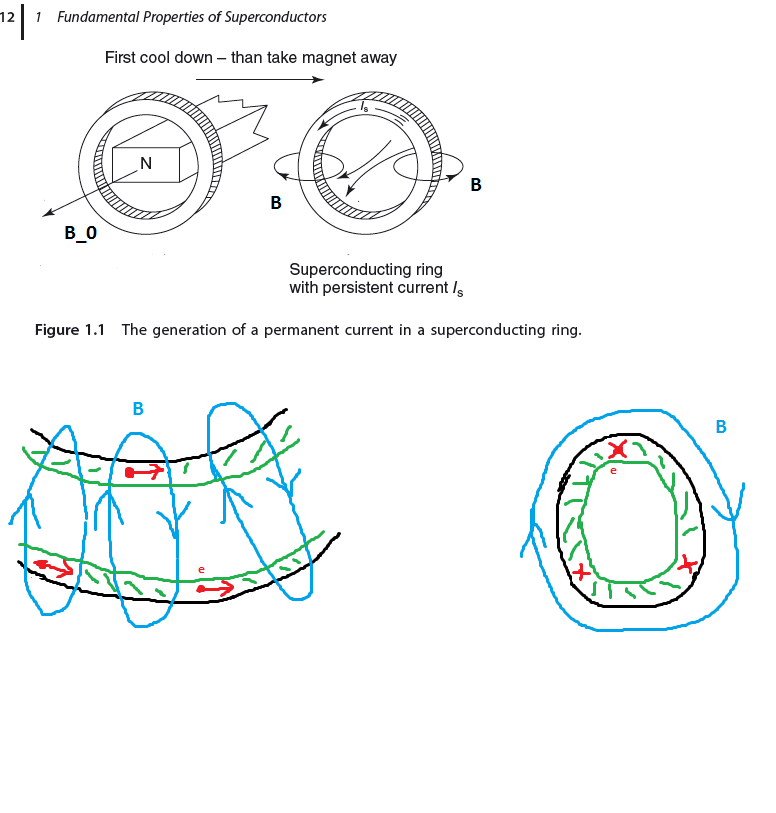 Consider a superconductor ring with temperature $T >T_C$ above $T_C$. Thus it possess a non zero resistance against any electric current throught it. Now we let a magnetic rod penetrating the ring opening. We fix it as described in the picture. During the penetration the ring perceives a non constant magnet field $B_0$ with ${\displaystyle {\frac {\partial {\vec {B_0}}}{\partial t}}} \neq 0$ and by Faraday's law of induction this induces an electric current along the ring. When we stop moving the magnetic rod the current attenuates as at the moment the ring has non zero electrical resistance value and only a non constant magnet field can enhance the current.

Now we cool down the temperature to $T<T_C$ and now the superconductor shows it's characteristic property: the electric resistence becomes zero! Then we pull away the magnetic rod. Then again the non constant magnetic field $B_0$ induces by Faraday's induction law a current in the ring and it is claimed that this current stays persistent.

I not fully understand why. The problem is the following: Firstly the electrons were accelerated by induction und as $T <T_C$ the superconductor property says that there is no resistence against the currect. That is the electrons where not slowed down by the matter.

The problem is the trajectory which we consider. If such electrons were moving rectilineary then I understand it. There is no resistence and thus it moving with constant velocity through the superconductor. That's fine.

But we consider a circular trajectory of current electrons in the superconductor ring. That is when such electron passes it's "orbit" it changes the whole time it's direction and thus it has to be accelerated the whole time if one wants a permanent current, right?

But after taking the magnetic rod away there is no additional force accelerating the electron in order to change it's direction (since it's trajectory has to be circular).

And that's exactly the problem why the described procedure above induces a persistent currence in the superconductor ring?

that is a big electromagnetic problem which is the exact nature of an electric current in a conductor Mainstream science attribute the current to some valence electrons (at rest turning at a high speed around the nucleus to compensate faraday forced by centrifugal force), easily detachable in a conductor then moving about freely, jumping from one atom nucleus faraday attraction place to another atom nucleus faraday attraction place, pushing each other as being pushed in displacement by the $\mathbf{E}$ field, (without rotating any more around the nucleus) and displacing themselves (slowly, very slowly ) around the conductor(supra) ring to generate the current and the magnetic field generated. We encounter the same problem when we found out that gravitational mass is equal to inertial mass, so linked to the number of particles (aka the number of electrical electron loops in the matter so when we accelerate the speed of matter the inertial force is linked to the opposition of space to fields change which acts on each atom as a force...Anyway, it is clear that in the case of a superconductor ring we must give energy in the form of an electric field to the ring to start the current, such initial energy of generating an electric field is linked to what is necessary to "detach" the now free electrons from their atomic orbit. So the best way to "detach" these electrons is through an electric field that starts the current. As there is no more heat caused collisions caused the loss of energy, the initial E field conserves itself and continue to maintain the current as typical perpetual motions as in atoms. The "detachment" of valence electrons is very common by rubbing non-conductor material (faraday static electricity)

That is when such electron passes it's "orbit" it changes the whole time it's direction and thus it has to be accelerated the whole time if one wants a permanent current, right?

But after taking the magnetic rod away there is no additional force accelerating the electron in order to change it's direction (since it's trajectory has to be circular).

Charged particles that form electric current in a solid body are usually bound to that body by constraint forces, which are strongest near the surface of the body. Otherwise the charged particles would easily jump out of the body. Of course, in practice this can happen, if external force (electric field, friction) tears them out, or if the concentration of particles is so high their mutual repulsion will eject them out of the body. In case of a smooth superconducting ring and electric field low enough, there is no force that could make this happen.

The situation is analogous to that of metal ball in a bearing. The ball moves in circles not in straight line because the bearing wall constrains the motion into a circle. Same with the superconductor ring. The surface is a barrier that does not allow electrons to just go in a straight line and leave the body.

As the magnet is withdrawn it induces an emf around the ring or, equivalently, it creates an electric field that is directed around the circumference of the ring. This field accelerates the superelectrons, creating a current. Once the magnet is far away and the emf is zero, the current remains.

Not the answer you're looking for? Browse other questions tagged electromagnetism solid-state-physics superconductivity or ask your own question.

4
Why the induced field is ignored in Faraday's law?
0
Why will a 'Non-Electric Faraday Motor' which just uses permanent-magnets, not work?
2
Magnetic field in perfect conductor : how to decide the "initial value" as $B=cste$
3
What is "electric field causes current in a conductor (metal wire)" exactly?
13
Why is there an induced EMF in a plastic ring?
3
Induced voltage difference in a magnetic field