Why is carbon dioxide a non-polar molecule?

Why is carbon dioxide non-polar every explanation keeps using the symmetry argument but I want to know what is fundamentally cancelling out because as far as I can tell there should be a positive middle without two negatives on the outside? 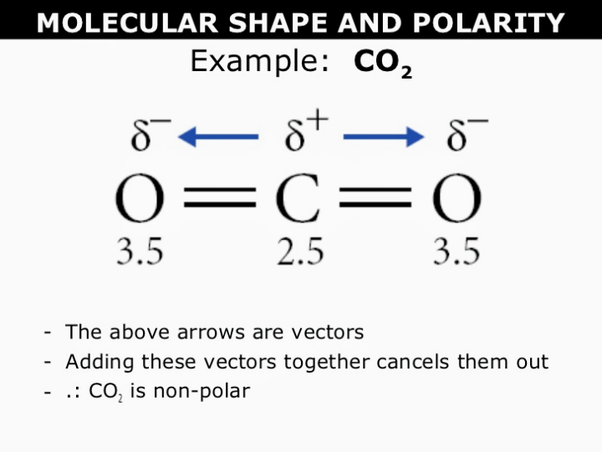 The difficulty might be due to nomenclature : How is polarity defined?

In physics the electric field of any distribution of charges can be decomposed into a series of electric multipole moments. The most fundamental is the monopole which means that the resultant electric charge is non-zero. Chemists use the term ionic. If the distribution is overall neutral but there is a separation between the centres of positive and negative charge then there is a dipole.

Having a dipole moment is sometimes taken as being synonymous with being polar - see first answer to Are asymmetric molecules necessarily polar? By this definition $CO_2$ is a non-polar molecule because its overall dipole moment is zero.

However, close to one side of the $CO_2$ molecule the nearer of the two dipoles will dominate, so the molecule will have a non-zero effect on an external charge. The 2 local dipoles (2x2) constitute a linear electric quadrupole. See also Difference between Non-Polar and Dipole moment $\vec\mu$=0. The $H_2O$ molecule has both a dipole and a non-linear quadrupole.

Higher moments are possible. 4 dipoles (4x2) pointing from the centre to the corners of a square form a octupole. The multipole components are generally weaker by an order of magnitude in succession. While the electric field of the monopole falls off as $1/r^2$ that of the dipole, quadrupole and octupole fall off as $1/r^3, 1/r^4, 1/r^5$ respectively.

Chemists do not use the multipole expansion; instead they define a polarity index.

Linear B-A-B molecules cannot be polar. i.e. cannot have a permanent electric dipole for symmetry reasons. Stated plainly, the electronic displacement from A atom towards the two B atoms (or the other way around if A is more electronegative than B atoms) must be symmetric with respect to the central atom, ending up with a molecule without a net electric dipole.

The only way an AB$_2$ molecule can have a permanent electric dipole, is if its equilibrium position is bent. This is not the case of CO$_2$, but there are other molecules,like SrCl$_2$ o SO$_2$ which do have a bent equilibrium configuration and consequently an electric dipole.

The basic reason why some of these molecules are linear and others are bent can be traced back to the interplay between a coulombic effect between ions, favoring linear geometry, and the possibility that a high electronic polarizability may favor a bent configuration.

In the chemistry dialect polar means having a non zero electric dipole moment. That is, if you put your molecule in a uniform electric field, it will orient itself aligning its dipole moment to it.

Let's consider an arbitrary molecular structure with no symmetry: it is likely that it will show some dipole moment. But if we stick that to its mirror image in such a way that the dipole moments have the same direction but opposite verses, the result will be a molecule that, globally, does not care about an external electric field (unless this becomes strong enough to mess with its internal structure).

I know that the symmetry argument is not very satisfying the first times it is brought to the table, but once you grasp the idea, it became so powerful and ubiquitous that it is always the first thing you look for in a new problem!

Basic covalent/chemical bonding, the two oxygen atoms are completing the valence shell of the carbon atom, this is stable due to the repulsive forces of the opposite charges being weaker.

Not the answer you're looking for? Browse other questions tagged symmetry physical-chemistry molecules dipole-moment or ask your own question.

0
Difference between Non-Polar and Dipole moment $\vec\mu$=0
4
What is a symmetry of a physical system?
37
Noether charge of local symmetries
0
Is it possible to break a carbon dioxide molecule using electromagnetic waves?