I've noticed in my physics textbook (and in a lot of other popular sources), that the process of integrating non-constant acceleration to get to a velocity formula, the integrating bounds imposed on the velocity-part seem wrong. 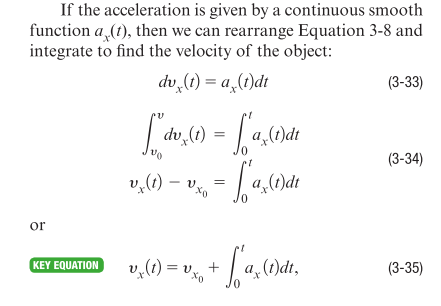 In the above snippet, they're using $v_0$ and $v$ as bounds in the definite integral on the left-hand side of 3-34. Why though? Why not use the (IMO) more appropriate bounds of $0$ and $t$? If I'm not mistaken, according to the fundamental theorem of calculus, that definite integral would evaluate to:

As people way smarter than me all seem to write it as in (1), I'm probably the one who's wrong. But why?

The other answers are correct in showing why what is being proposed in your text is correct, but I want to show you where your error is and how to easily fix it directly.

Your issue is that you are plugging velocities in for $t$ instead of $v_x(t)$ i.e. you have done

The fundamental theorem of calculus states: "For a continuous function $f:[a,b] \mapsto \mathbb{R}$

Notice that at time $t=0$ the velocity is $v_0$, and since there is only one independent variable (time) really, the integration starts at the same time for both sides of the equation.

Graphically I can explain this with the following timeline 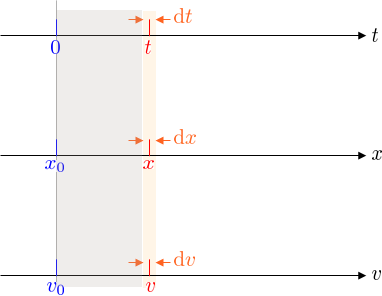 where shaded is the integration range, showing how $t$, $x$ and $v$ vary with time.

It might seem odd (to me it did) to solve separable differential equations by making the bounds of the integrals the initial conditions instead of solving it as an indefinite integral and tweaking the resulting constant to fit the initial values.

Regardless, here is a resource I found helpful

Not the answer you're looking for? Browse other questions tagged kinematics acceleration velocity integration calculus or ask your own question.

1
Derivation of the average Velocity formula with constant acceleration (using calculus)
0
Calculating position of a particle at time $t$ in a gravitational field
1
Obtaining position from a curved velocity vs time graph
0
Velocity at x seconds, given initial velocity and initial position
4
Change of velocity of a falling object over height (acceleration changing with height)
0
Integrating acceleration yield different equations
20
Why do these two ways of understanding constant acceleration give different results?
6
Alternative expression of acceleration in vector form
1
Show identity about divergence theorem