Why is light with a small wavelength required to have a rectilinear path?

I was studying about light waves today and and in the introduction of the chapter there is a paragraph as follows:-

1) The Dutch physicist Christian Huygens suggested that light may be a wave phenomenon.

2) The apparent rectilinear propagation of light may be due to the fact that the wavelength of light may be much smaller than the dimensions of these openings and obstacles.

I am unable to understand the second paragraph. I want to know why the small wavelength of light (smaller than the openings) is required to have a rectilinear path?

I want to know why the small wavelength of light (smaller than the openings) is required to have a rectilinear path?

The simple answer is that with common light sources the effects of diffraction are usually not observed and this was certainly true when Huygens wrote his Treatise on Light in 1690. In chapter one, On rays propagated in straight lines, there is the diagram (shown below on the left) which he uses to explain the rectilinear propagation of light.

In his description he makes an interesting statement

For if, for example, there were an opening BG, limited by opaque bodies BH, GI, the wave of light which issues from the point A will always be terminated by the straight lines AC, AE, as has just been shown ; the parts of the par- tial waves which spread outside the space ACE being too feeble to produce light there.

Now, however small we make the opening BG, there is always the same reason causing the light there to pass between straight lines ; since this opening is always large enough to contain a great number of particles of the ethereal matter, which are of an inconceivable smallness ; so that it appears that each little portion of the wave necessarily advances following the straight line which comes from the luminous point. Thus then we may take the rays of light as if they were straight lines.

The inference is that Huygens never observed diffraction or interference and used his construction to explain reflection (centre image above) and refraction (right image above).

A few years later Young and Fresnel did experiments and produced theories based on the ideas of Huygens to observe and explain interference and diffraction effects.

Going back to the second part of the original question although undoubtedly the fact that the wavelength of light is small does make diffraction and interference hard to observe today you can easily show the effects at home as shown below. 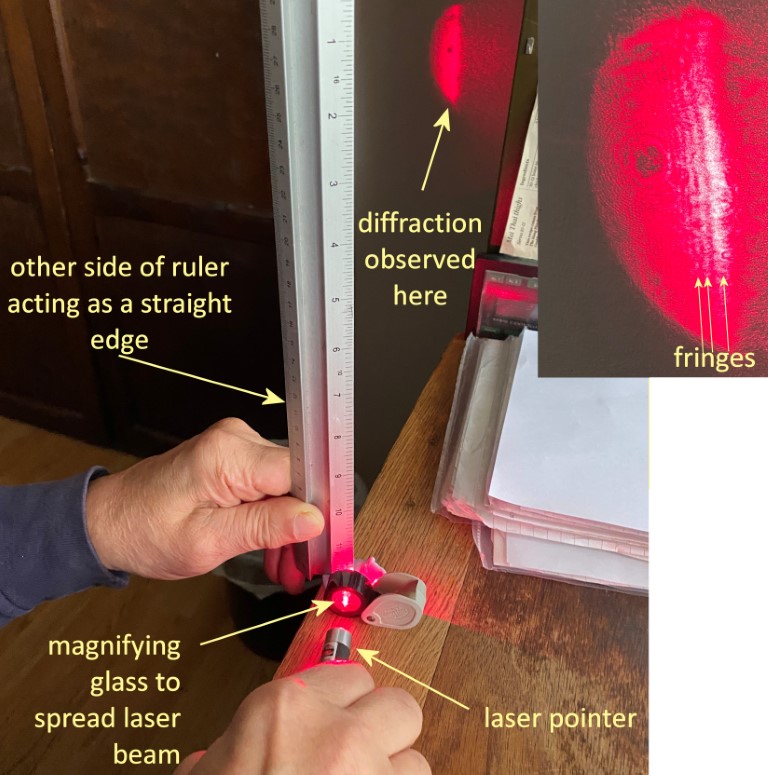 What those early experimenters did not have use of a very bright source of light of one wavelength which was provided for me by the laser pointer.
For them the fringes might well have been there but they were mostly not observable hence Huygen's claim that the parts of the partial waves . . . . . being too feeble to produce light.
The same is true today and so geometrical optics (light travels in straight lines) can be used to predict the outcomes in lots of situations.

The second paragraph reasons that rectilinear propagation of light can be explained even if light were a wave. When the aperture is much larger than the wavelength, there is no chance of diffraction and the light appears to go straight. However, experiments have shown that when the slit width is comparable to the wavelength, light bends around the slit and does not follow a straight line.

Not the answer you're looking for? Browse other questions tagged optics waves diffraction or ask your own question.

2
Visible light and colors
2
Relation between the direction of propogation of sound and loudspeaker's diameter
8
Is there a tunable visible wavelength optical filter for exclusively filtering intense coherent laser light?
1
Geometrical optics approximation in General Relativity - Expansion parameter
1
Interference in diffraction gratings
0
If the illuminating source is monochromatic, will result in a series of alternating light and dark bands of gradually changing intensity on the screen
1
Order of coloured bands of light: red, blue, green, orange, red, violet, green, and violet
2
Huygens' principle: Its correct interpretation, and why there is no destructive interference in every wave? (unsatisfied with current answers)