Why is there a link between binding energy per nucleon and fission energy?

"The reason energy is released in fission is because the daughter nuclei have a greater binding energy per nucleon." I just can't get my head around this for some reason. I am in high school physics.

I understand from the graph of binding energy per nucleon against nucleon number that heavier nuclei are more suited for fission but why? How come the total binding energy of heavier atoms, say uranium-235, is greater than that of smaller nuclei? Doesn't electromagnetic repulsion overcome the strong nuclear force at larger distances so wouldn't that make it easier to separate the nucleons? I know that the binding energy of larger nuclei is greater but, again, why?

What my question is in summary: Why is the energy released in fission due to the daughter nuclei having greater binding energy per nucleon?

Binding energy is negative. You have to give the nucleons energy to unbind the nucleus. Think of it like gravitational binding energy (which is also negative for a bound object). The (positive) difference in binding energy when heavy nuclei split is available as heat (or rather, photons and kinetic energy).

The question about why smaller nuclei are more bound (per nucleon), is that they have fewer self-repulsing protons but still a large number of nucleons that feel the strong nuclear force.

This is in addition to Rob's answer:

Nuclei are held together by the nuclear force which overcomes the repulsive electric force from the charged protons contained in the nucleus. So how much bound they are depends on the balance of the two forces.

If you look at this map of isotopes, i.e. nuclei that have the same number of protons, the fight between the two forces is evident. 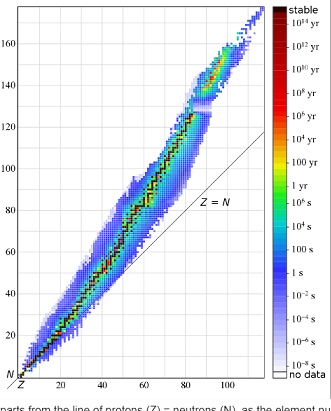 The stable nuclei are the dark line in the middle of the blue. Note the straight line fits only for low mass nuclei. That is that in order to overcome the repulsive electric forces of the growing number of protons, a lot more neutrons are needed for a stable binding, due to the strong nuclear force between protons and neutrons.

0
Will helium produced during a Nuclear fusion go back to Hydrogen?