What reaches the ground first? A charged particle or a neutral particle in a constant gravitational field?

But unable to understand the mathematical solution on the radiation, I ask a corollary question:

Let us consider two identical (macroscopic) balls of mass $m$, one has an electric charge $q$ and the other one is electrically neutral. If both are held at a distance $h$ from the ground and later released to fall in free fall in a constant gravitational field, which ball reaches the ground first for an observer standing on the ground?

Of course, other answers have dealt with the question of whether or not radiation is emitted, but I am interested on whether the balls take the same time to reach the ground or not. I know that in a free falling frame, both balls will not radiate and both will "reach" $h=0$ at the same time. But what about from the perspective of somebody on the ground? I know that simultaneity might be lost between frames when dealing with relativity. Is this the case here?

Radiation from acceleration in a gravitational field of the Earth would be a tiny effect under most circumstances. Much greater effect would be the (nondissipative) force acting on the charge from the surface charges on the conducting ground induced by the very same free falling charge.

This situation is essentially equivalent to the classical problem for the method of images: a charge near conducting plane (with the ground being that plane). 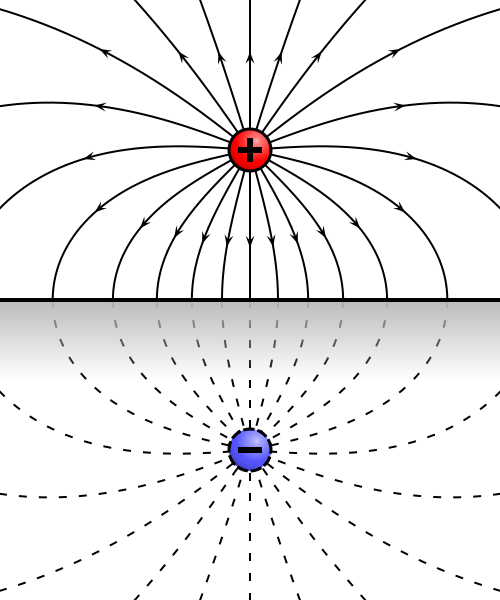 Since the motion of a charge under reasonable assumptions would be nonrelativistic, to the first approximation fields would be almost electrostatic and our charge $q$ would feel an additional force: $$ F_\text{add} = \frac{1}{4 \pi \varepsilon_0} \,\frac{q^2}{4 h^2}, $$ where $h$ is the distance toward the surface of the earth. This force would be directed toward the Earth and under most reasonable assumptions would be much greater than any radiation reaction (which would be a very small relativistic effect). As a result, the charge moving under this force would reach the ground faster than a free falling uncharged mass.

The question also contains some misconceptions, so let us try to clarify some issues:

I know that in a free falling frame, both balls will not radiate and both will "reach" $h=0$ at the same time.

In most situations involving curved spacetime, conducting objects, dielectrics or multiple charges, radiation cannot be treated as a local quantity. So neither Larmor formula nor Einstein equivalence principle are applicable to the question of what the charge would be radiating. Instead, one has to solve both equations for the motion of the charge and Maxwell's equations in curved spacetime and/or material medium. Radiation would then emerge as an energy flux in the asymptotic region (and thus it is not something that could be measured by a single observer either moving with the charge or located on the ground).

Not the answer you're looking for? Browse other questions tagged newtonian-mechanics electromagnetic-radiation newtonian-gravity charge or ask your own question.

11
Is it true that any system of accelerating charges will radiate?
11
why dosen't a charged particle radiate energy in circular motion in a uniform magnetic field?
2
Why is the gravitational field potential scalar?
14
Can the question of a gravitationally accelerated charge radiation be tested experimentally?
1
Does an accelerating mass radiate energy?
0
Does an classical charge that is stationary in a gravitational field radiate?
3
Do accelerated moving electrons radiate electromagnetic energy?
0
Neutral buoyancy and free fall