Is the acceleration of a pendulum at the lowest point in circular motion $=0$?

If we are in the frame of a pendulum (accelerating frame) it will have a centrifugal force and it's weight acting vertically downwards and the tension of the string acting vertically upwards. Now the force equation will be $$T=mg+\frac{mv^2}{R}$$(T=tension | m=mass of pendullum | v=velocity at its lowest point on the circle | R is the length of string(radius of circular motion)... 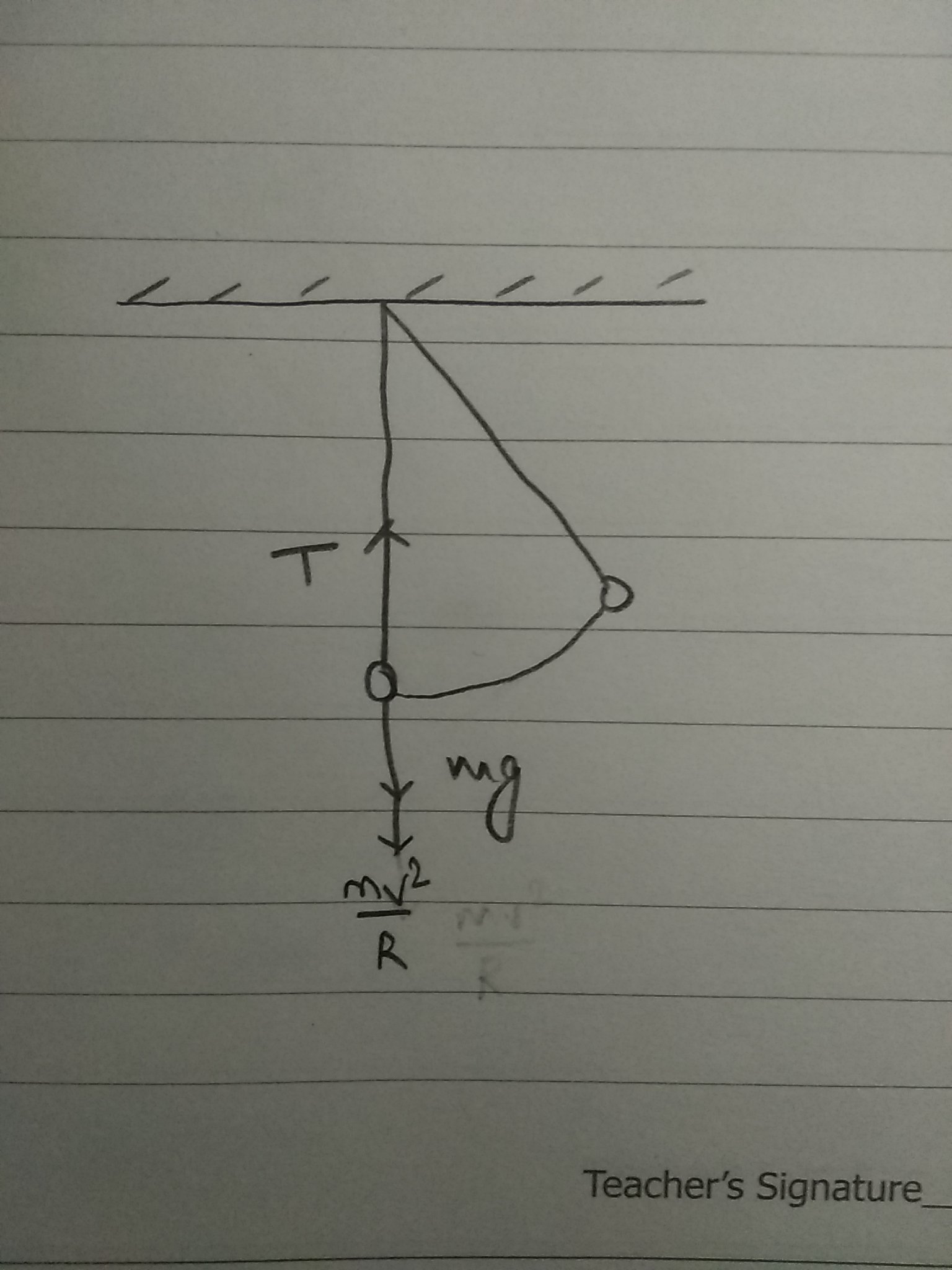 this is the problem where in the solution it is considered that the bob has acceleration of $\frac{v^2}{R}$ at the bottom most point and not zero.How can this be explained??(https://i.stack.imgur.com/CNAXQ.jpg)

Solution to the above problem (https://i.stack.imgur.com/ajj5O.jpg)

In the frame of the bob ,the acceleration of the bob at its lower point is zero.

So in the frame of the bob there is a force acting on it due to the tension in the string which has a value in excess of $mg$ which in the laboratory frame explains why the bob undergoes a centripetal acceleration. $T (= mg + F') -mg = \frac{mv^2}{r} \Rightarrow F' = \frac{mv^2}{r}$.

In the frame of the bob ,the bob is not accelerating so if Newton's laws are to be used there must be no net force on the bob.

To make the net force zero so that Newton's laws of motion work in the accelerated frame of the bob, an additional (pseudo/fictitious) force is added which in this sort of example is called the centrifugal force which has the same magnitude as the force causing the centripetal acceleration in the laboratory frame but is opposite in direction. Rather than label that fictitious (cenrifugal) force $F'$ in the diagram it is labelled $ \frac{mv^2}{r}$.

This acceleration is provided by Tension in the string, i.e. it doesn’t only balance the bob’s weight, but also provides the centripetal acceleration. This extra tension arises as the Bob is trying to stretch the string but in ideal cases we assume the string to be inextensible. Even in a practical situation, even a small extension may cause great tension in many strings due to their elastic properties.

However, you can say that the bob’s tangential acceleration is zero at the bottom most point, since there are no forces on it in the direction tangential to motion at that point.

NOTE: I believe that bob is the technical term for the mass suspended in a simple pendulum (one that you have described). That is why I have used it in my answer.

Not the answer you're looking for? Browse other questions tagged homework-and-exercises newtonian-mechanics forces acceleration centrifugal-force or ask your own question.

0
At what point of a pendulum's swing is its acceleration the greatest?
1
Is there a reaction force on the ball in a vertical circular motion?
0
Necessary condition for circular motion
0
How does tension work for a simple pendulum? What force is at play to keep a rigid body from stretching?
1
Forces of a conical pendulum in the reference frame of the ball (of the pendulum)
2
Why do we feel a force in circular motion?
1
Pendulum Circular Motion query
1
Is the force on the bob of a pendulum with respect to ground 0 at the bottom?
0
How does a simple pendulum gain its acceleration?