Thought experiment regarding an object approaching a mirror

Here's a thought experiment I came up with in class today when my mind drifted (I however highly doubt I'm the first to think about this since it is pretty rudimentary) :

Let's say superman approaches a (flat) mirror at 200,000 km/s. At what speed does superman's image approach him?

This has given me a big headache. I have pondered a lot of solutions, but none of them really convinced me. What is the correct solution to this thought experiment?

The question is not just about the question whether Superman's image represents a "real piece of information". It's clearly not actual matter located at the appropriate point in space. Instead, the image is a virtual place defined by certain criteria. But the fact that the image isn't quite material doesn't mean that you should switch back to Newtonian formulae for velocities. They're never right in a relativistic world. They're wrong for Supermen as well as their images.

We define the image as the fictitious object that, when stationary, would produce the same light as the mirror that reflects the light from the actual object. If you define the image in such a way that its $x$ coordinate (transverse to the plane of the mirror) is just the opposite, $-x$, of the coordinate of an appropriate point of Superman – while $y,z$ are the same at the same moment $t$ – then the world line of Superman's image is exactly the same thing as the world line of another, material object that is actually moving 200,000 km/s in the opposite direction.

To be convinced that he sees exactly what he would see if the image at $−x$ were a real object, consider that the trajectories of the photons may be simply given the right sign to $x$ and one may switch between the light from Superman reflected from the mirror and light from the image - and this rule applies to the coordinate $t$ as well, assuming that $t$ is time measured in the mirror's reference frame. So the image works just like in normal physics and the relative speed $12c/13$ works without any disclaimers - he sees exactly what he would see if someone who is real were moving $12c/13$ towards him.

Rereading the OP I found that it is the speed of approach of light that is your question, more that the actual appearance of the image.

I will quote the most fundamental paper on this issue, the famous paper by Einstein, June 30, 1905, ON THE ELECTRODYNAMICS OF MOVING BODIES

§ 2. On the Relativity of Lengths and Times

-- original answer:
find it for yourself is the best way. useful references:

A few years ago a package light++ was available from here: Werner Benger Visualization of special relativity
Lubos RF

About image and information:
Information is any stimulus that is 'acknowledged' by any object. Stimulus is a variation over a possible undetected continuum. To be perceived the receptor has to have a non null physical dimension to act as an antenna. Image is the collection of stimulus (usually light rays) that are presented in a given moment at the detectors (your retina f.i.) irrespective of the total length of space traversed by the light, and the moment of the emission. Look at the night sky and the image has light from billions of l.y. and the one reflected by the Moon a few moments ago.

The image seen is contracted in relation to the size of the image (reversed) when the speed is near zero (in one dimension). In 3d the image is more complicated.

I hope that the picture is clear. Two light rays emitted in the past,a mirror and a retina. 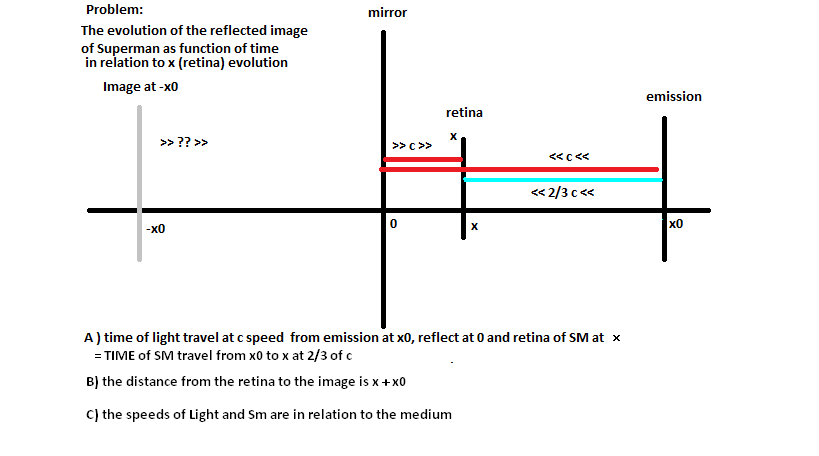 The image describes the geometry of the problem.

I'm 10 steps away of a mirror and see my image at 20 steps.
For each step I make my image approach 2 steps. So, at low speed, non-relativistic, the image approaches me at double of my own speed.
If I'm approaching the mirror at c speed I am not able to see my image because there are no reflected rays that were emitted by me because they cannot travel faster them myself. In any other case the double of my own speed is the minimum value of the speed of the image in relation to me.

The distance to the mirror was measured by timing the reflected light when Superman (SM) was still in relation to the medium and the path was labeled at equal distances. Travelling at 2/3c as SM crosses each mark he releases a different colored light ray and he will see it at x position (blue shifted image at -x0).

To measure the speed I will not use the clock of SM because he is subjected to time dilation and length contraction. Instead and because I am 'above' the scenario and know all the distances and speeds I will use my own uniform clock because I am measuring from the 'medium' viewpoint, i.e. as observer I am not in motion I just sit at each point of observation waiting for the event: light hit. This way this is only a classical exercise, not a relativistic one.

It is hard to accept an answer that is above c but we have to realize that light and the SM, the only ‘objects’ in scene do not travel above c .

-- measuring from the mobile viewpoint is different because his own clock rate changes when he is in motion. To do that one must enter the relativistic approach that I avoided in my answer. In spite of that my answer is correct, I believe.

To show the length contraction you can think in this way: when he was at x0=20 he wanted to measure the distance to the mirror and received the reflection at x=4, 24 seconds after the emission. Then he divided by 2 and got a distance of only 12 if he uses the same clock rate as obtained at rest, but we know that he cannot do this because of time dilation.

I understand that my previous answer is not on target because it only says about the speed of light in relation to the retina and in that particular point it is accurate and in full agree with Einstein. To perceive the motion of the reflected image we have to take more than one snapshot and because of that I colored the emitted light.

Everyone knows that the speed of propagation of the light is c but it should be emphasized that this value is only in relation to the medium. Exactly because of this I quote what Einstein wrote in his paper of June 30, 1905, ON THE ELECTRODYNAMICS OF MOVING BODIES

§ 2. On the Relativity of Lengths and Times

Clearly $c+v$ and $c-v$ are the relative speeds of light in relation to the mobile.

Superman's image approaches him at c, it will be blue shifted a bit towards xrays. Luckily Superman has xray vision so he should be able to see himself.

For the side question of what you would see at c, try this link.

Not the answer you're looking for? Browse other questions tagged special-relativity reflection faster-than-light or ask your own question.

3
Can speed of image in mirror exceed the speed of light?