Finding parameters of a Gravitational Assist

I am trying to answer a simple question: If a rocket performs a gravitational slingshot around a body of mass m, altitude h, and angle $\theta $ and initial velocity ${ v }_{ sun }$, what will be the resulting ${ v }_{ sun,f }$ of the rocket? This simple question has turned out to be extraordinary difficult to answer.

MATHEMATICALLY: I know that a gravitational slingshot involves a hyperbolic orbit. Given that one focus of our hyperbolic orbit should be the planet of interest, it's understandable we seek the polar equation for a hyperbola, $r=\frac { p }{ 1+e\cos { f } } $, where $p = a(1-{e}^{2})$. The five parameters that uniquely define a hyperbola in the above two formulae are $r$ = distance from planet to rocket, $p$ = parameter, $e$ = eccentricity, $f$ = the True anomaly, or the angle is respect to the periapse (point when the planet and rocket and closest), and $a$ = semi-major axis of hyperbola. Other parameters include ${ v }_{ sun,i }$, the velocity of the rocket IRT the sun initially and ${ v }_{ sun,f }$, the velocity of the rocket IRT the sun after the assist. Let ${ v }_{ planet }$ be the velocity of the planet.

I've made a graphic consisting of all the constants I know so far. 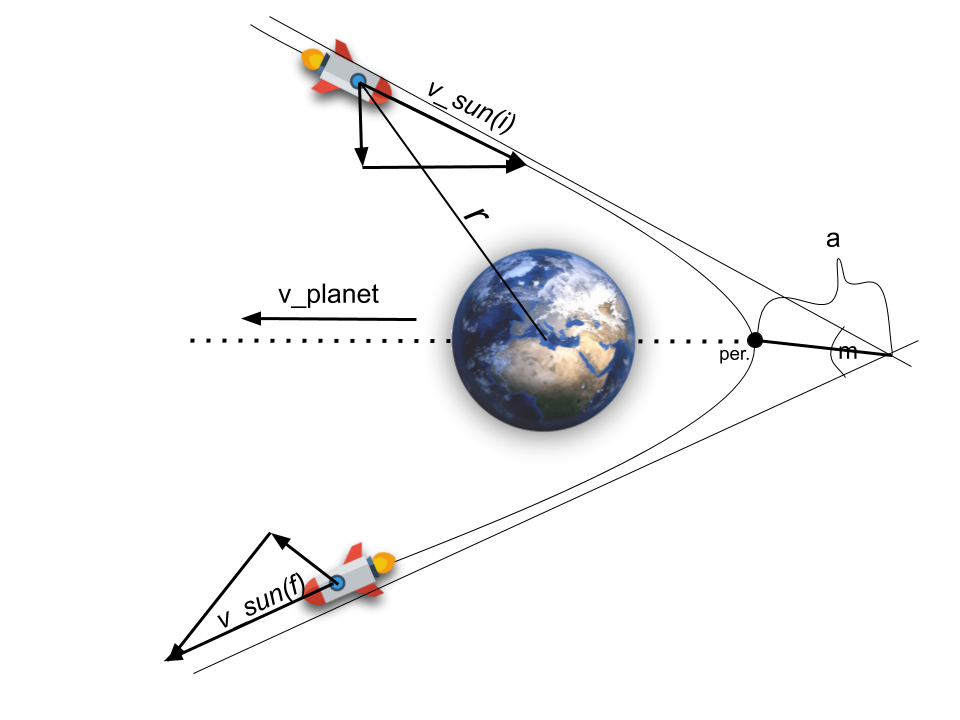 I would greatly appreciate it if anyone could assist me in answering my question.

1
Why does gravity assist transfer twice the planet's velocity?
0
Orbital mechanics: hyperbolic trajectory: periapsis
2
Orbital parameters of more than two bodies
3
Finding eccentricity of orbit given speed, altitude and polar angle
0
Is any elastic collision disallowed if the only force of interaction is gravity?
3
How Can I Calculate the Speed Required for an Orbiting Planet to Pass Through a Given Point in Space?