$$\mathbf D = \varepsilon \mathbf E$$ I don't understand the difference between $\mathbf D$ and $\mathbf E$. When I have a plate capacitor, a different medium inside will change $\mathbf D$, right? $\mathbf E$ is only dependent from the charges right?

Like @Marek has said above, the electric field $E$ is the fundamental field, and is in some sense the more physical. However, Maxwell's equations have a neater geometric meaning if you throw in the "auxilary" fields $D$ (and $H$ for $B$). I usually tell my students the following version of electromagnetism:

These equation form Maxwell's equations. They do not uniquely determine a physical situation. In particular, they need to be augumented with constitutive relations which describe (macroscopic) material properties. For example, we might have linear, isotropic, homogeneous (LIH) media, in which case we would have $D = \epsilon E$ and $B = \mu H$. But in general, we might have $\epsilon$ and $\mu$ being tensors, varying as functions of time and space, or even depend on the fields $E$, $B$, etc! These constitutive relations could be arbitrarily complicated, and indeed much of the new field of meta-material engineering is all about creating micro-structures which would yield interesting and useful constitutive relations at the macroscopic scale. More commonly, a scenario where the linearity breaks down is in ferromagnets/ferroelectrics.

There is usually another constitutive relation, linking current and electric field. In LIH media this is called Ohm's Law: $J = \sigma E$.

There is one more equation, which is simply always true, which is the conservation of charge; in the notation above, $\partial_t Q(S) - \int_S j \cdot dS = 0$.

In a relativistically covariant form, we can merge $E$ and $B$ together to get the 2-form $F$, and $D$ and $H$ to get its Hodge dual $\star F$. The latter in general depends on the metric we choose. For linear materials it's possible to hide the effects of the material polarisation/magnetisation as a background metric. Incidentally, in this form, the energy is given by $F \wedge \star F$, so it is clear that energy/momentum should be "opposing" pairs, i.e. the Poyntin vector is $N = E \times H$.

In numerical simulations, it's doubly important that we obey Maxwell's equations --- failure to do so leads to highly unphysical things like superluminal propagation of waves or failure to conserve energy or momentum. It has been found that the key is to be exact with respect to the integral forms of the equations, and put all of the discretisation error into not meeting the material constitutive properties.

$\mathbf E$ is the fundamental field in Maxwell equations, so it depends on all charges. But materials have lots of internal charges you usually don't care about. You can get rid of them by introducing polarization $\mathbf P$ (which is the material's response to the applied $\mathbf E$ field). Then you can subtract the effect of internal charges and you'll obtain equations just for free charges. These equations will look just like the original Maxwell equations but with $\mathbf E$ replaced by $\mathbf D$ and charges by just free charges. Similar arguments hold for currents and magnetic fields.

With this in mind, you see that you need to take $\mathbf D$ in your example because $\mathbf E$ is sensitive also to the polarized charges inside the medium (about which you don't know anything). So the $\mathbf E$ field inside will be $\varepsilon$ times that for the conductor in vacuum.

This works well for the vacuum. However, to describe electromagnetic fields in matter, it is convenient to introduce another field $\mathbf D$. Maxwells original equations are still valid, but in matter, you have to deal with additional charges and currents that are induced by the electric field and that also induce additional electric fields. (More precisely, one usually makes the approximation that the electric field induces tiny dipoles, which are described by the electric polarization $\mathbf P$.) A little bit of calculation shows that you can conveniently hide these additional charges by introducing the electrical displacement field $\mathbf D$, which then fulfills the equation

The point is that this equation involves only the "external" ("free") charge density $\rho_\text{free}$. Charges that accumulate inside the block of matter have already been taken into account by the introduction of the $\mathbf D$ field.

$D$ is the electric displacement field or commonly the flux density and $E$ is the field intensity. There is a fundamental difference between them which will be understood to certain extent as you go through the following answer. Consider a point charge of $Q$ coulombs. This means that the number of flux lines emitted by the charge is $Q$ coulombs. 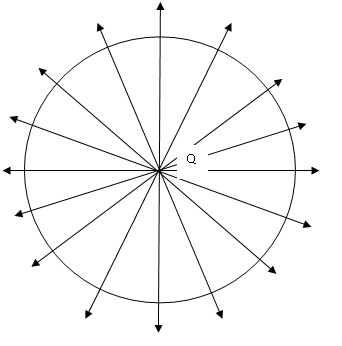 Let the hypothetical sphere shown in figure has a radius $r$. Then $D$ is given by \begin{equation} D = \frac{Q}{4\pi r^2}. \end{equation} That is, $D$ is the number of flux lines passing per area. So, to get an intuitive grasp, interpret $Q$ as a number (number of flux lines) and $D$ as a number density (number of flux lines per area). Now, what about $E?$ $E$, which is the electric field intensity, is actually a force ($E$ is defined as force per coulomb) per flux line, that is the force carried by each flux line. So, the relation $D = \varepsilon E$ connects the number density of flux lines, D, with a force per flux line term, $E$. Now, the permittivity $\varepsilon$ is defined as the ability to pass lines of electric flux through it. This is a qualitative way of saying. Quantitatively, it can be seen as the ratio $\frac{D}{E}$, that is, $\varepsilon$ is the number of electric flux lines (unit is coulomb, as mentioned earlier) passing through unit area for unit force/flux (which is unit field intensity). That is, say $\varepsilon = 5$ (this value of $\varepsilon$ is hypothetical and considered only for the sake of explanation) means, there are 5 flux lines in a unit area considered normal to an electric field with each flux line carrying $1 N$ force.

Not the answer you're looking for? Browse other questions tagged electrostatics electric-fields polarization dielectric or ask your own question.

1
Difference in physical meaning between $\vec{D}$ and $\vec{E}$
2
Difference between $E$ and $D$ in conservative fields
1
Why do polarization & magnetization have opposite effects on $E$ vs $B$?
1
Electric current in anisotropic media
1
Why don't we care about bound charges inside dielectric?
0
Why does the electric displacement vector $D$ have the same unit of charge density?