How are magnets held together, and why do they not explode?

Imagine we have a magnet (red side is the north pole, blue side is the south pole), and imagine two ways to split it. 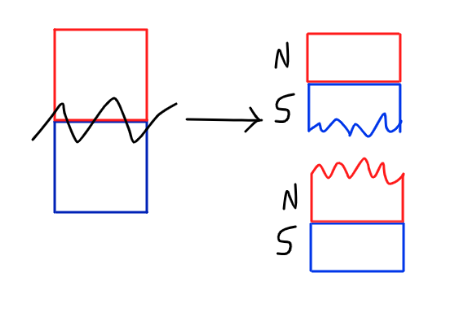 When we split it by separating the north pole from the south pole, we see that the two pieces are themselves dipole magnets. The two broken ends will be opposite poles and they will attract each other. 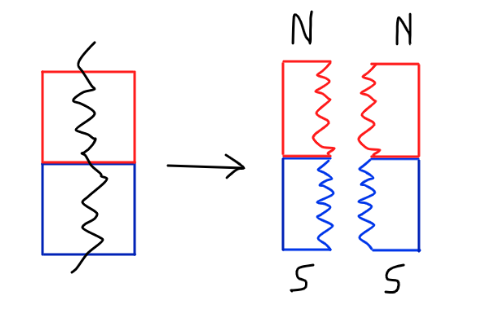 When we split it along the two poles, the two resulting magnet pieces will repel each other.

My question: If there is a repulsive force within the magnet that is pushing the magnet horizontally apart (in my picture), then what is keeping it together?

The chemical bonds of the material keep it together.

If the magnets you're thinking of are made of metal, then the chemical bond is the metallic bond, which is quite strong. You can get a sense of how strong it is if you try to rip a metal bar into two. Unless you are exceptionally strong, you probably won't manage – but you are probably able to pull a bar magnet off a refrigerator door, for example. The force of the metallic bond is much larger than the magnetic force.

Ironically, the source of the metallic bond is also the electromagnetic force. For typical values, the electric force is much larger than the magnetic force. You can get a sense of this by examining the force between two spheres with charge $1\ \mathrm C$. If the two spheres are separated by a vacuum and are at a distance of $1\ \mathrm m$, the force between them is approximately $9\times10^9\ \mathrm N$. Meanwhile, if one of the spheres is moving at a speed of $1\ \mathrm{m/s}$ in Earth's magnetic field, the magnetic force it experiences is approximately $3.2\times10^{-5}\ \mathrm N$.

This large discrepancy is what keeps the magnet (and atoms) together.

Take two fridge magnets that attract each other, stick them together, and pull them apart. Then take an ordinary piece of metal, and pull on its ends with about the same force. This produces roughly the same tensile stress that a fridge magnet is under constantly. Are you surprised that the metal doesn't come apart in your hands?

The OP is completely, totally, correct.

There are many common objects, example

where the "self-" magnetic field is so strong that it easily rips apart objects, molecules, atoms, and even photons.

Such things are the common state of the universe.

In really rare, unusual, conditions (eg, your fridge magnets, on Earth), it does not happen. 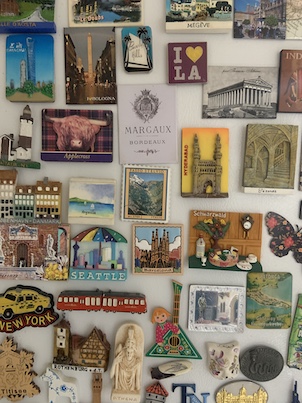 These typical Earth magnets are less powerful than other common objects in the universe, and hence do not exhibit the behavior described by the OP.

The electrons and the nuclei are held together by the EM force (the static electric fields of the charges), still way stronger then the static magnetic field of the magnets in your case.

Now the atoms inside the magnet are held together by something we call covalent bonds, and these are contrary to popular belief a QM phenomenon. These covalent bonds are due to a certain sharing of electron orbitals, and their effect is that the covalent bond is way stronger then the static magnetic fields of the bar magnets in your case.

You are asking what keeps the domains of the magnets together, and the answer is this covalent bonding.

As you already indicated, physical units need to be considered. When working in SI units, the ratio of electric field strength over magnetic field strength in EM radiation equals 299 792 458 m/s, the speed of light c.

Why are magnetic fields so much weaker than electric?

Covalent bonds are EM (electrostatic/electronegativity) or not?

So the answer to your question is that the covalent bonding (of the particles) is way stronger then the static magnetic field's strength of your bar magnets, and that keeps the domains of the magnets together.

18
Why are magnetic fields so much weaker than electric?
3
Covalent bonds are EM (electrostatic/electronegativity) or not?

6
Conservation of energy in Lenz's law
2
How would you explain the cause of earths magnetism to an 8th grade student
0
Equal and opposite electron flows in a magent?
2
Question about north and south poles of a magnet
1
What are the north side and south side magnetic metals called?
1
If a magnet was in a cuboid shape, would a magnetically attractive/repulsive force only be emanating from 2 of the 6 sides?