If different wavelengths of light have different speeds, how can they move together as a white light in air?

The different wavelengths do move at different speeds in air, but the difference is so small that white light remains "white" - all the colors move at effectively the same speed.

Maybe one more idea to get your head around: Suppose white light enters a medium with "significant" dispersion, but the angle of incidence is $0°$. In this case the different wavelength have different velocities, but the refraction angle is zero. Hence, the rays with different wavelength reach our detector at different times, however, they are overlapping. Thus, the following image sketches helps us to understand the physics 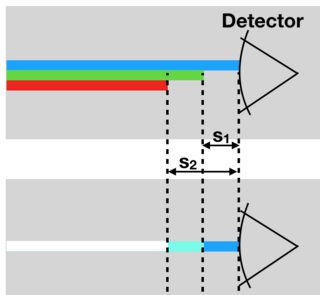 As said before, the colours are not shifted in their position. Nevertheless, in the upper image I shifts the three colours in $y$-direction to explain the "superposition picture", while the lower image shoes the "experienced color":

Not the answer you're looking for? Browse other questions tagged electromagnetism visible-light speed-of-light refraction wavelength or ask your own question.

1
william herschel discovering infrared problem
3
Physics of color: why do visible colors absorb all colors except the color itself?
3
How is white light created by complementary colors?
0
Can an electromagnetic wave travel less than the speed of light and yet perceived by the eye as a light?
0
Refracting an image through 2 prisms
2
If two different mediums have the same refractive index do they refract light identically at all wavelengths, pressures, etc.?
2
Does recombination of light in a glass slab happens in the same way like in Newton's inverted prism experiment?
0
Bubbles (water) are transparent, then how can they produce white light in mass amounts?