Moving a projectile without recoil?

I was thinking that if you have a shaft pushing a projectile you would have to have some sort of recoil along the shaft. Newton's 3rd law, every action has an equal and opposite reaction. However, I came up with a thought experiment which doesn't appear to have any recoil.

Imagine a shaft in space, so no gravity, no air. In the shaft there are vents along its wall that can emit particles perpendicular to the shaft's wall. The projectile is at rest and then particles from the vents are emitted in a sequential order and with symmetric force on all sides of the projectile such that they hit an area on the projectile that deflects the particles downward. This would impart momentum on the projectile to go "up". Yet, there is no recoil, no backward force on the shaft. The shaft doesn't move, only the emitted particles. Here's an example image: 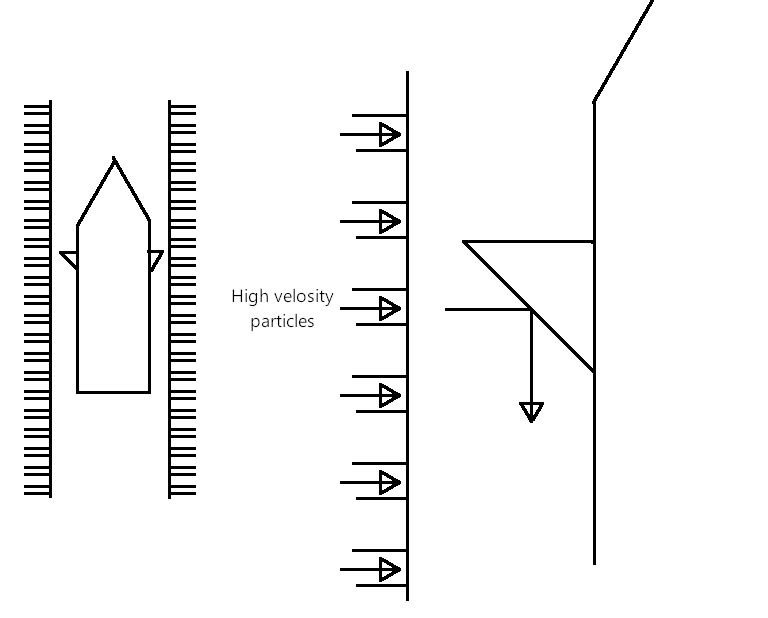 Now my question is, does this make sense? Is there something that I'm missing? I'm finding it difficult to believe that one can move a projectile without imparting any net force on the thing that is causing the movement. Can this be done with a field? Like magnetism? Or other mechanism?

The projectile exerts an equal and opposite force on the particles, rather than the shaft, as an impulse is needed to change the motion of said particles. Newton's laws are not violated.

Electric, magnetic and gravitational fields all conserve momentum (because their lagrangians are invariant under translations in space) so Newton's third law cannot be violated using any of these fields. For example, if a projectile is accelerated using an electric field, the charged object causing the field will accelerate in the opposite direction.

0
Calculate average speed of projectile with air resistance
0
Newton's third law, opposite force with a wall vs a floor
0
Adding an additional fan to a fan powered sail according to Newton's 3rd Law?
1
Tension in a string moving in elevator
2
Force perpendicular to velocity