Does a person at the top of a tall building receive less electric shock compared to a person at a lower level?

We know that resistance $R$ of a material is given by:

where $\rho$ is the resistivity of the material, $l$ is its length and $A$ is its area of cross-section.

Further, concrete is a bad conductor of electricity. Otherwise, we would have used it in power lines instead of copper or aluminium! So, resistivity of concrete is high (but not infinite) or conductivity is low (but not zero).

This made me wonder, whether a person at the top of a very tall building is less susceptible to electric shock compared to a person in a lower level. Let me explain why I arrived at this conclusion using the following image: 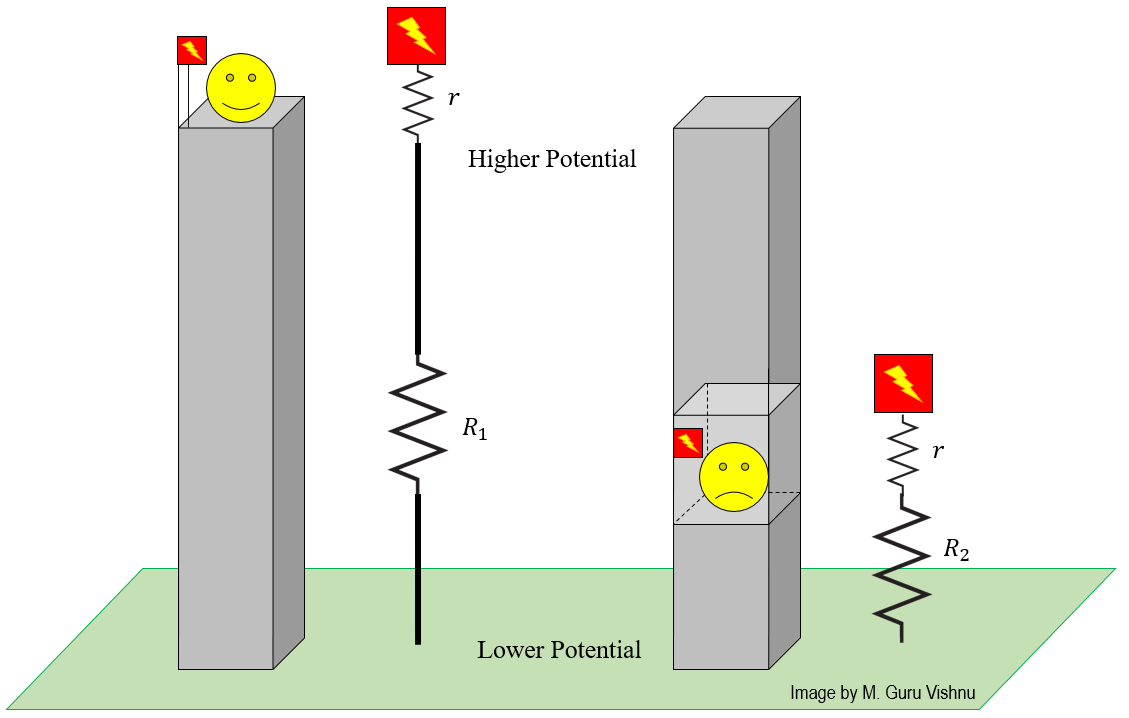 The red coloured box with a lightning symbol is the power source which is at a higher potential with respect to the potential of earth. "🙂" and "☹" are our volunteers with an electrical resistance of $r$ ohms. The first one is at a higher level than the second one. Let as assume both building are of uniform cross-section $A$ with uniform resistivity $\rho$.

I'm assuming the part of building between the volunteers' feet and the ground to be resistors of resistances $R_1$ and $R_2$ respectively.

Since, resistance is directly proportional to the length $l$ of the material, $R_1$ is greater than $R_2$. As same current flows through the volunteers' and the buildings they are in a series combination.

As $R_1>R_2$, $r+R_1>r+R_2$. Thus for the same potential difference, the current that flows through the person on the left building is comparatively lesser than that of the person on the right building, in accordance with Ohm's law. The difference is high because of the fact cement is an extremely poor conductor.

I have used a lot of assumptions in my reasoning and it was quite surprising to see the final result. Is this really true? Is there any "safe floor" above which a person could happily touch a power line without receiving electric shock?

I have used a lot of assumptions in my reasoning and it was quite surprising to see the final result. Is this really true? Is there any "safe floor" above which a person could happily touch a power line without receiving electric shock?

You are ignoring the fact that there are many other potential current paths to ground in a building other than the construction concrete.

Metallic plumbing may offer virtually no electrical resistance resistance to ground. In a building on any floor there may be metal enclosures of permanently wired electrical equipment that are intentionally grounded to reduce the risk of electric shock in the event of electrical insulation failure within the equipment. The metal housings of many cord connected portable and stationary equipment may also be grounded. So if you simultaneously touched an uninsulated power line and any grounded metal surface at your location, you could receive a lethal electric electric shock.

Bottom line: You never want to touch an uninsulated power line under any condition.

Your reasoning is correct but you are forgetting that buildings are not made of solid concrete. They are usually lined with steel wires and all sorts of metals. Almost every building from the past two centuries is electrified which means that all circuitry is connected to the ground via a ground plate. The current will definitely prefer go through the metals which offer very low impedance. Hence the floor you are on will not matter much in case you get shocked.

Not the answer you're looking for? Browse other questions tagged electricity electric-circuits electric-current everyday-life or ask your own question.

0
Conductor resistance calculation method
5
Lightning Conductor Working
1
How to predict length of conductor?
2
Skin Effect Explanation
0
Skin depth; EM wave and AC
1
What is the microscopic explanation for why is there more power in a circuit with a smaller resistance?
0
How does a resitance affect electric current in a circuit...??(series)