Can two tanks open to atmosphere have different water levels? 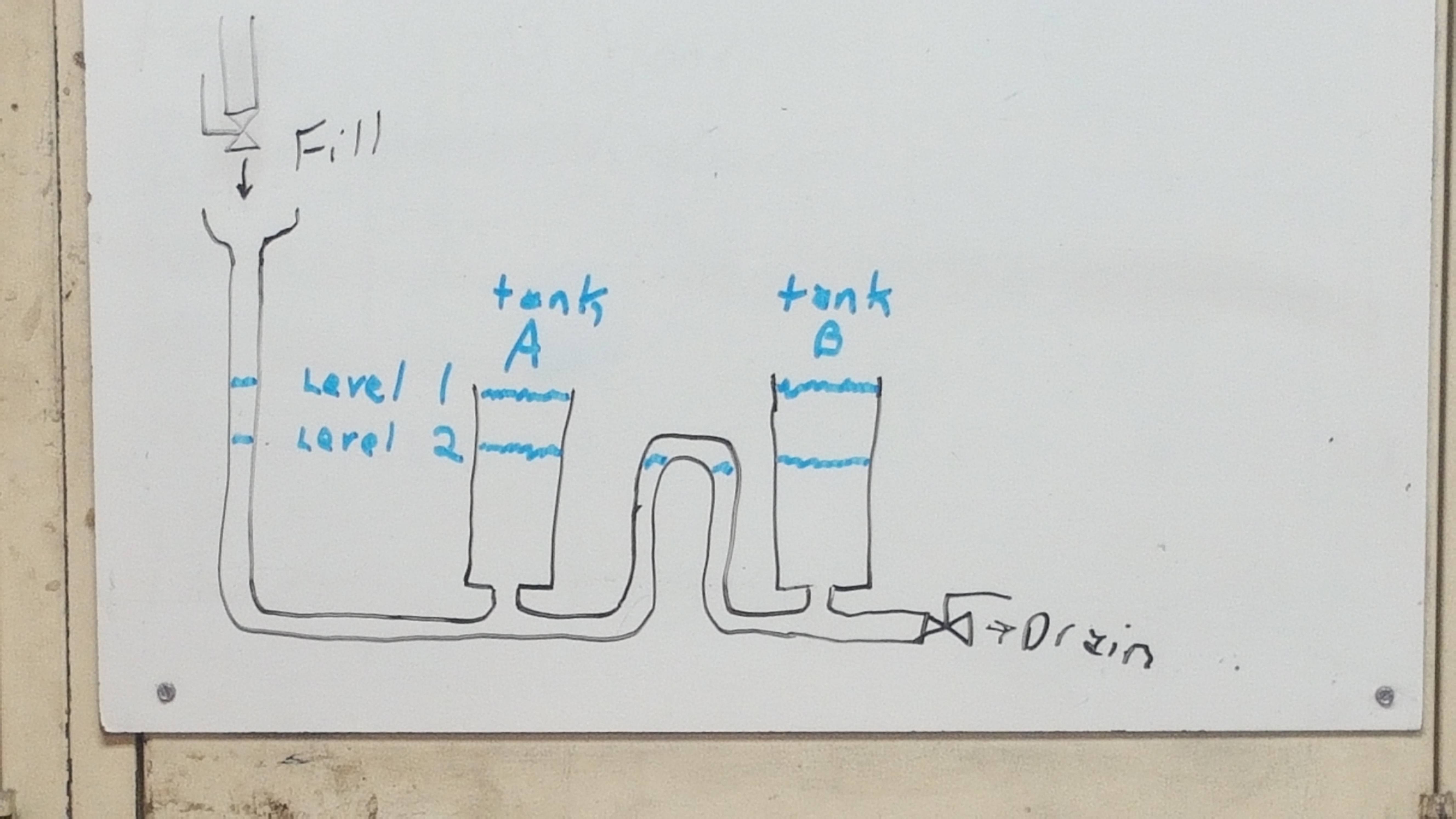 What will the water levels do as the tanks are filled? Air will get trapped in the return bend, this I know, but how it effects the eventual filling of the tanks I don't. After both tanks are filled the drain is opened. What will happen now? Will tank A siphon, or will the trapped air prevent that? Can tank A ever empty?

Let's start to pour water in originally empty tanks. Everything is simple until water level on Tank A reaches level 2. What happens next depends on the size of the whole system.

If the diameter of tubes is small or if we pour water fast enough, the right part of the U-tube will be filled, no air will be actually trapped in it, and the water will siphon from Tank A to Tank B until the level in both tanks will become the same (and lower than the upper part of the U-tube). Water levels will remain the equal in tanks as we continue to pour water.

But it may happen that water will not be siphoned. Water will slowly move along the walls of the right part of U-tube until the Tank B starts to fill up. The right part of the U-tube is filled with air, and this air becomes trapped. In this case the behavior of the system will be quite different. As we pour mo water the levels in both tanks will raise, but these levels will not be the same. Water level in tank A will be above upper part of U-tube by the same height $h$ as the total level on tanks B:

This must hold because water in both tanks should produce the same pressure in trapped air.

UPDATE: now about the second part of the question: what would happen after the drain will open.

In case there is no air trapped in the tube everything is simple: all the water would just siphon out from both tanks.

In case there is air trapped in the tube, the water will start to drain from both tanks simultaneously, so that the level in both tanks will decrease with the same speed. By the time Tank B become empty, level in the Tank A will become exactly "Level 2" on the picture, left part of the U-tube is filled, right is empty and system stops in this state.

Not the answer you're looking for? Browse other questions tagged fluid-dynamics pressure fluid-statics or ask your own question.

4
How to establish relation between flow rate and height of the water column of the tank?
1
What happens if a cylinder filled with propane gas is connected to an empty one of the same size
0
Starting a siphon with flow of water/ flow of water create a negative pressure?
1
Two sealed valve-coupled water/air tanks with a common sump. How long after the valve is opened does it reach steady state?
0
Emptying two water tanks at different levels with priority through same outlet pipe
2
Modeling water flow between two tanks
2
Water level in connected tanks
1
Why can water wicks act like siphons?