I am wondering why a reversible adiabatic expansion results in a higher work output on the surroundings though the irreversible adiabatic expansion has to overcome the frictional force and therefore, in my opinion, has to do more work and its internal energy is reduced more even when some of the dissipated energy is "restored". Or should we consider the dissipated energy as energy gained from the surroundings. But this is an adiabatic process and there is no heat transfer possible. I am confused

The dotted black curve shows the adiabatic work done on the surroundings (external work) if there were no friction.

Could you please explain the same for an irreversible adiabatic compression because if the external pressure compress the gas there also has to be a reduced work "output" (from the point of the view of the environment) due to piston friction. That is the thing I do not understand. In my opinion it is the same as an expansion, just reversed albeit we have more work "output" and a higher internal energy after the compression, respectively. Somehow I have a fallacy. I try to understand this for three weeks. –

The effect of friction is not the same for compression and expansion.

During expansion the piston moves out and the gas (the system) is exposed to the elevated wall temperature. Heat is transferred from the wall to the gas increasing the internal energy of the gas. 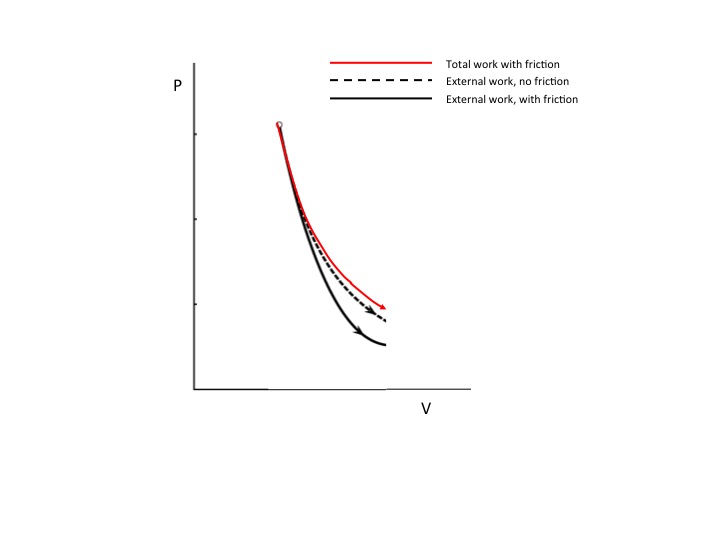 Here the work output means how much useful work a system has done. Since it is an adiabatic process , dU is converted to dW , and for a fixed dU , obiusly reversible system will give you more output. Understand it by an analogy, Its like you have fixed amount of energy. And in one case you have to run on highway , and in other on an marshy , muddy road .

Of course. You have no energy drink available ( dQ =0) Now definitely you run more distance on highway than on the marshy road. You will not say I did more work by struggling with mud , stone and terrain.

Because I am not concerned about that. I just want in which way you can run the greater distance . Same is with thermodynamics.we are just calculating the useful work. In engine we want efficiency , we don't care whether its truck engine aur motorbike engine.

The essence of the distinction between a reversible and irreversible process is that in the latter, some energy is "degraded" (i.e. entropy is generated), while in the former, it is not.

(Macroscopic) force generation, however, is not energy degradation - it is doing work (ordered, or structured, use of energy). Hence, in a reversible process, the greatest possible energy will go into producing work.

If, however, it is irreversible, then the part of the energy that got degraded into entropy is no longer available for doing work. Hence less work is done. The push from the expanding gas is weaker.

Not the answer you're looking for? Browse other questions tagged thermodynamics work reversibility dissipation adiabatic or ask your own question.