Why doesn’t a conductor have hole current?

I understand how holes are treated as independent mobile charges by imagining each cation left behind when an electron jumps to an adjacent hole as “moving” positive charges (holes).

I also understand that conventional current refers to the flow of “extra” electrons not part of a covalent bond pair (like in an n-type semiconductor) flowing in the conduction band, and that the flow/jumping of electrons from one bond pair to a hole in an adjacent bond pair refers to the hole current in the valence band.

But I don’t understand why hole currents are neglected in conductors. In conductors, valence bands and conduction bands are said to overlap, but what exactly does this mean for the movement of electrons? In solid states, we say that metals consist of a sea of mobile electrons in a lattice of fixed positive ions. Is this the reason we say there’s no hole current? Because the leftover cations can’t really move (even virtually, since there’s no adjacent bond pair “jumps”)?

Am I confused about what hole current is or what conduction current is? Because the same question for conductors could be asked for the majority charge carriers in n-type semiconductors. How exactly does not being part of a covalent bond and lying in an independent orbital give these majority charge carriers more “freedom”? The cations that these extra electrons leave behind when they flow freely are similarly fixed in the lattice, but why can’t that one empty orbital from which the extra conduction electron emerged be treated as a hole too? Why reserve that term only for vacancies created in bond pairs? Is it because no electrons can actually jump into these lone vacancies, thereby ensuring that the vacancy stays with the same atom?

I feel like I’m very close to the answer but I can’t quite get it. Hopefully, my chain of reasoning is clear.

Semiconductors - easier to visualize a hole as a broken bond and you can add up numbers of holes and electrons and figure out currents.

Metals - Need to understand Fermi Surfaces and Reduced Brillouin Zones. When in magnetic field you have Hole like orbits, Electron like orbits. It depends on the Zone being filled - no conduction if the zone is filled (no fermi surface in the zone), Hole like behavior if the the zone is filled with electron states but has unfilled states at the middle of the zone and Electron like behavior if the zone is has unfilled states but filled states in the middle of zone. Then there are open orbits and the electrons move along the Fermi Surface from zone to zone.

In semiconductors it is a little bit easier to treat the hole as a particle and think of having a heavier effective mass and an opposite charge to an electron by thinking of it as an empty bond or state moving around. For the moment forget about doping and consider an intrinsic semiconductor material and excite it with a photon, and you will get an exciton where the electron will orbit the hole and act like a hydrogen molecule, and if you have an electric field you can separate and hole from the electron each will travel to the appropriate electrode. If you have a photoconductive detector, since the electrons and holes have different mobilites you can even have photoconductive gain by pulling another electron out of an electrode. If you have an avalanche photodiode you can find that you have different multiplication factors for holes and electrons. So all in all talking about holes is useful and easier to visualize in semiconductors. For photocurrents you can sum up can count the holes and electrons etc.

In a metal, where you have a fermi gas visualizing holes and understanding why a material like aluminum can have a positive hall coefficient is a little more complicated. In the band filling picture you can say the band is partially filled and that when a field is applied you get conduction with the electrons in the unfilled band. However that doesn't explain how you can get a positive hall coefficient in materials like Aluminum.

To understand the positive hall coefficient in metals t is useful to think about Fermi Surfaces and how they look like in reduced Brillouin Zone Scheme. Chapter 9 in Kittle Solid State Physics has an explanation and claims that you can't really understand the property of metals unless you consider a metal as "a solid with a Fermi Surface.

The Fermi surface is defined as the surface of constant energy $\epsilon_f$ in $k$ space that separates unfilled orbitals from filled orbitals at absolute zero. Conduction currents occurs when there are changes in the occupancy of states near the Fermi Surface. 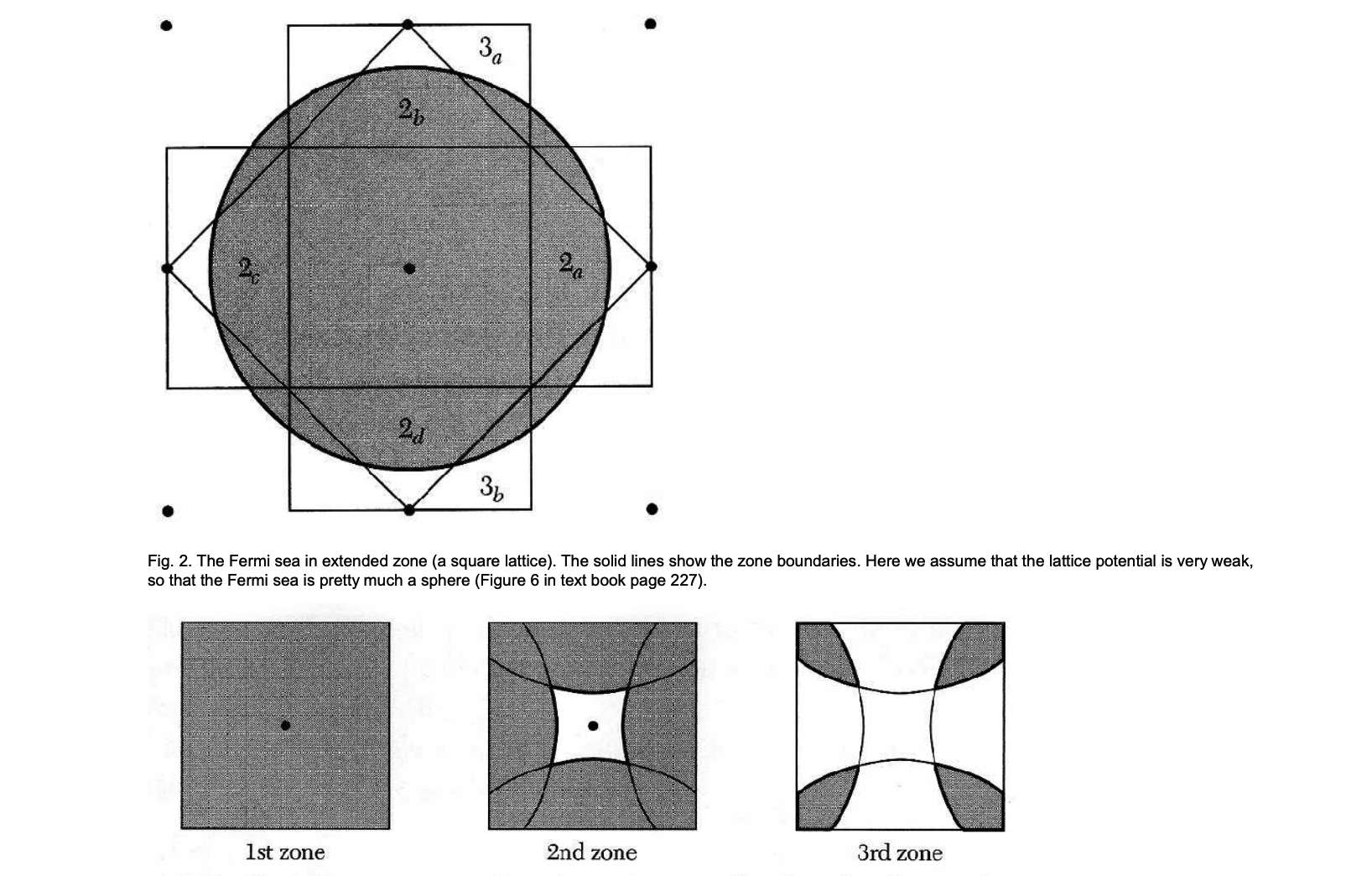 Doing this in a weak periodic potential smooths out the construction some but you see that in second zone energy increases towards the center of the figure (vector is the gradient of the Fermi surface) and in the third zone the vector points outward. Looking at the curvature we can say holes float and electrons sink.

When a magnetic field is applied an electron on the Fermi Surface the electron will move along the surface since it is a surface of constant energy.

So as you can see from the figure with the magnetic field out of the page depending on fermi surface the motion of the electrons can either be hole like, or electron like moving along the Fermi Surface clockwise or counter clockwise.

It is still electrons changing distribution of filled state when a field is applied, but details will depend on the crystal structure and number of electrons that are free to move and you may have more than one type of electron motion going on at the same time.

Shortest answer: in reality, conduction by holes is just movement by all the electrons in the band, causing the hole to move, and causing net / overall conduction in the material. In a conductor / conduction band, the electrons are already able to move almost-freely, so we don't need to think about the hole concept

Longer version: when you calculate / determine the band structure of a material, you determine both the possible energy levels of the electrons as a function of the wavevector, as well as the occupancy of those levels. For the three major classes of electrical materials there are three situations of how the electrons fill up the bands:

A hole provides conductivity in an insulator or a semiconductor because it appears within a previously completely filled band, and allows conduction w/in that band. In a crude picture, imagine before the hole is present that electrons occupy every orbital within each atom in a solid. When a hole is created, one of these is now empty and electrons can fill in this empty position sequentially, causing a net effect of conduction.

However in the conduction band things are very different. Since it starts out only partially filled, there are plenty of empty states that electrons can occupy with only a very small gain in energy that allow them to move. There's no need to use the concept of the hole moving because it's easier to just think / calculate the effect of the electrons themselves moving.

Not the answer you're looking for? Browse other questions tagged electric-current semiconductor-physics or ask your own question.

1
Why are there electron and hole currents in semiconductor, but only electron current in metal?

5
Band Gap/Energy Bands in Semiconductors?
1
Why are holes the majority carrier in P-Type semiconductor?
3
What is recombination current?
0
Electrical conduction using band theory
0
In a PN diode, does current flow between the conductors attached to the P and N types valence bands as well as their conduction bands?
0
Why doesn't the extra electron in n type semiconductor due to doping by a pentavalent impurity create a hole?
0
At absolute zero, how does the gap between the valence band and conduction band increase in silicon crystal?
1
What makes of a current in solidstate/semiconductor physics?