I'm trying to understand the relationship between the "number" of field lines passing through a region and the magnetic force in this region.

I understand that the drawings are of course conceptual: we cannot draw "all" the field lines (although can be visualized with iron fillings).

Also the magnetic field $\vec{B}$ (measured in Teslas) and called "magnetic flux density". This is often considered as the "strength" of the field (the magnitude of the vector at a given point of the vector field).

How can we put the 2 together? Can we really say that there are physically a certain number of field lines passing by a region of space?

No, there is a field line passing through every point in space, so they are infinite in number. However, if you follow a finite number of field lines, they will be closer together when the magnetic flux density is greater. It may be better to think about a flux tube bounded by field lines. Gauss's law predicts that the product of the magnetic field and the cross-sectional area is roughly constant if the area is small. Thus, where the flux density is greater, the tube is narrower.

This is a dichotomy of a discrete variable (the finite "number" of field lines) and a continuous variable (the B field smoothly changing values over all of space). While your question is specifically directed to magnetism, the intuition for the relationship between B-field strength and counting field lines might be more visible if we abstract the problem. 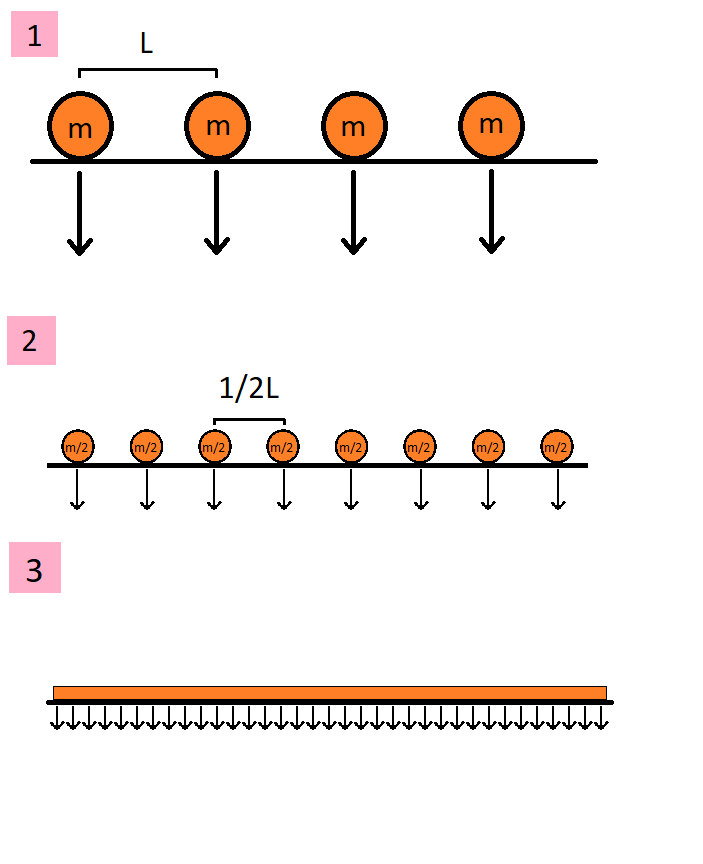 Consider a platform Like (1), with masses evenly distributed each exerting a downward force on the platform. If we wanted to find the "force density" between a point A and B on the platform, we would add the force vectors (the downward arrows, analogous to the discrete field lines) and divide them by the distance between A and B (some multiple of L)

Now consider (2), where there are twice as many masses per unit length, each with half the mass of (1). Obviously the sum of the force vectors over a length between A and B will be identical to (1), even though there are a different number of "field lines".

However, if you wanted to approximate (3) without having to use calculus, you could model it as (1) or (2), so long as $dF/dL$ was equal to the Force/Length measurement of the discrete model.

If you have taken calculus, this is the same property that allows an integral of a function to be approximated by the Riemann sum over the function.

The flux can be regarded as "number of field lines crossing a surface".

On the other hand, the sentence $B$ is proportional to the number of field lines in the region can be deceiving.

What this means is that, if you choose to draw X lines of $B$ field... the separation between the lines tells you the strength of the field.

But this happens in all fields. If lines arise from the north pole... they are closer together there. Then they spread out as they come far from the pole.

So yes, the proximity between lines is an indicator of the field strenght, because the field is stronger in the pole and it decreases as you go away from them. When you go far, you let more space to the lines to spread out.

That has nothing to do with magnetic flux. Flux requires a given surface which lines can cross through.

A nice resource is GSU. Has a good pix illustration of the field lines as well. Note, the magnetic flux is a scalar quantity, while the magnetic field and area are bivectors.

In electromagnetism, ‘flux’ is defined as a scalar (the surface integral of a vector field, i.e. a density function by unit area), with the term ‘flux density’ used for the bivector or vector.

Confusingly to beginners, in other science fields, e.g. astronomy, ‘flux’ is defined as the rate of flow per unit area, so is not a scalar quantity. For example, energy flux is energy per unit time per unit area.