After a diode start conducting, can you increase voltage across the diode without current change in the diode?

let's answer this question using the example below:
Let's imagine an ideal condition, where a 5V ideal voltage source with no internal resistance is connected to a diode, the voltage source can only supply max of 1A of current, how will the circuit behave? what will be the voltage and current in the diode?

My thinking which is probably wrong:
In Fermi band diagram, to put it simply, you need to increase the fermi level of electrons in the n region to overcome the reverse bias, so that some electrons can be higher than the conduction band in the P region and spill over, thus conduction follows.
My misunderstanding is probably surrounding the cause and effect of the fermi level change. I thought the elevation of fermi level governs the maximum I that can be allowed to flow thru the junction. The actual I is determined by the how much the circuit allows. In a sense the voltage across diode is like opening an adjustable valve in a water pipe, if you only have trickle of flow in the pipe, opening a valve any further won't get your more water.
however in reality, I suspect, V and I are strictly coupled. In another word Fermi levels can NOT be manipulated purely by external voltage source without having the charges available to pile up to cause that voltage increase. you need electrons to pile up on the n side to cause the fermi level to increase on the n side.

After a diode start conducting, can you increase voltage across the diode without current change in the diode?

No, actually the opposite is true. 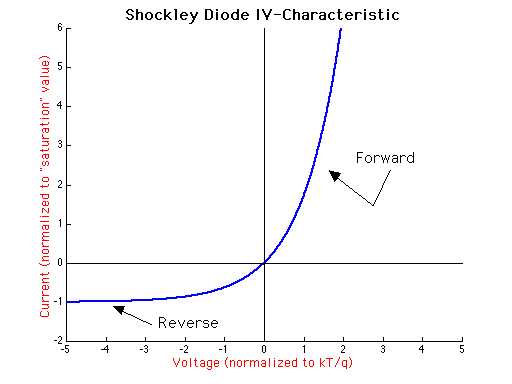 For voltages in forward direction much larger than $kT/q$ ($\approx 0.025$ V) you need only a small increase in voltage ($V$) to get a large increase in current ($I$).

And for voltages in reverse direction much larger than $kT/q$ ($\approx 0.025$ V), you get almost no increase in current even for a large increase in voltage.

A 5V ideal voltage source with no internal resistance is connected to a perfectly conducting wire. What is the current in the wire?

If you apply $V = IR$, you find that the current in the wire is infinity. That clearly can't be true.

What actually happens is that non-idealness of the various components takes over. The current $I(t)$ will be determined by a combination of the self-inductance of the wire loop, various stray capacitances throughout the circuit, radiation resistance, the internal resistances of the wire and battery, and the current the battery can produce.

At the very least, you need to model the current with a differential equation which accounts for some of these effects. Just writing down $V = IR$ implicitly assumes that a reasonable steady state exists, which the system can actually reach, which isn't the case here.

None of these complications are captured in the $I(V)$ characteristic, so looking at it alone won't tell you what will happen in your situation: it depends on precisely how nonideal various features are. That said, you can make stories about what could happen, depending on the circumstances.

For example, a conventional battery has a limited current because its emf is produced by positive and negative ions being pushed to opposite sides of it, through a chemical reaction. If you take out the ions faster than the diffusion of ions within the battery can replenish it, then the emf of the battery will go down. In other words, when we say this kind of battery has a maximum current 1 A, we really mean that the steady state voltage it produces starts to fall rapidly above currents of this size. Thus, in this case both the battery and the diode have nontrivial $I(V)$ characteristics, and the steady state solution is their intersection. That is one possible story for what could happen.

7
What is injection level (semiconductor physics)?
6
Materials for use in a solar cell
0
Why can't a reverse biased diode conduct by majority carrier injection (UPDATED)?
2
Specifics of the current flow in a tunnel diode
1
Conventional explanation of basic Semiconductor & Diode behavior unconvincing
0
Do electrons on $n$-side loses its energy to fall into holes on $p$-side during forward bias in a diode?