I'm studying the Landau quantization of free electron systems and a question comes to my mind when I arrive to the degeneracy of the levels. This is given by the following expression:

As we can see, this expression does not depend on the energy level. How is this possible? I mean, following my intuition, when we turn on the magnetic field, all the levels being $ħ\omega_c$ around a Landau level, collapse into this Landau level, so at the end, the number of states in a particular level should increase as we go to higher Landau levels, as well as the degeneracy, since at higher energies in the free electron model the number of available states increases. Am I wrong about this idea? I guess intuition can fail when we talk about these complex phenomena.

There is no $k$ dependence in the dispersion relation of Landau Levels. They are flat. 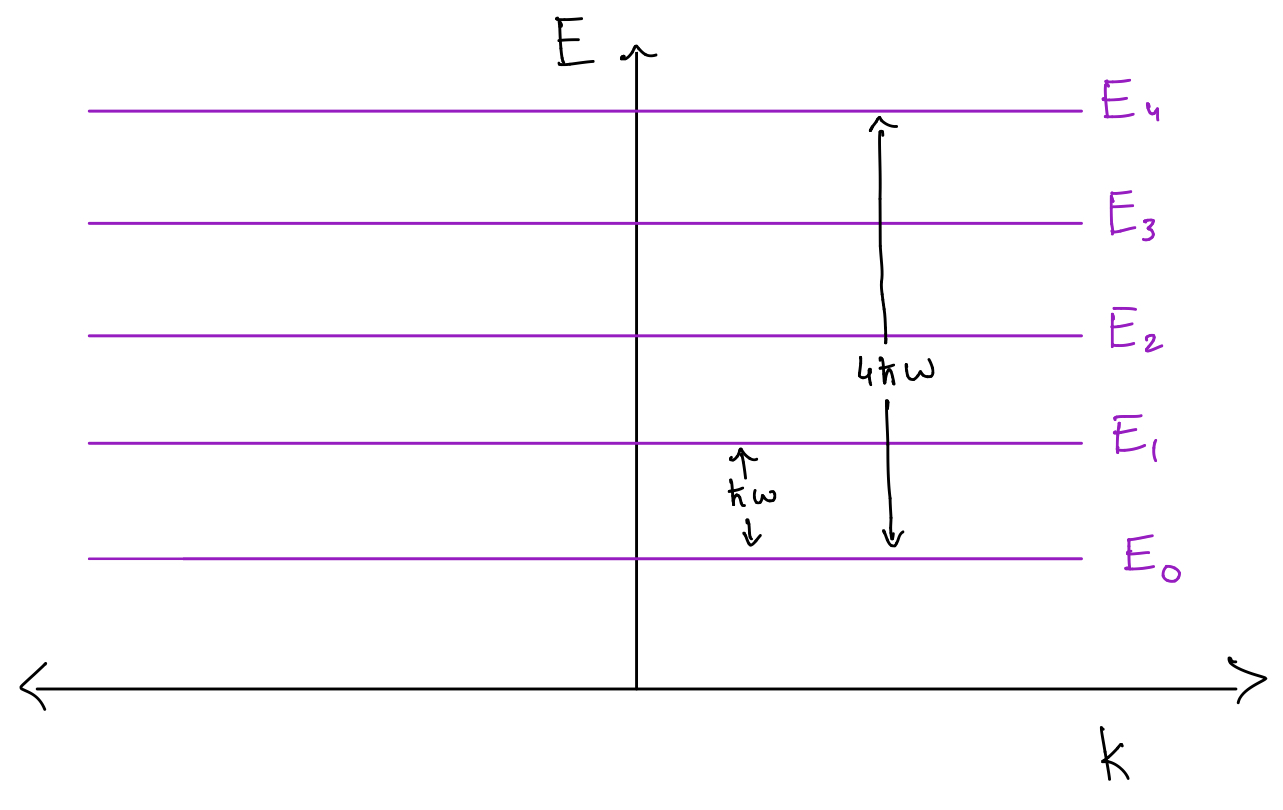 Since degeneracy counts the number of $\left(k\right)$ states available for the system at a particular energy, if energy state is independent of $k$, then each state will have the same degeneracy.

I think this explanation is quite cumbersome without a proper picture so I suggest you go to Kittle's Introduction to Solid State Physics, page 246, Fig. 24.

When you sketch the Landau levels in a 2 dimensional k-space with $k_x$ and $k_y$ axes, you can observe that they describe circles, and that the distance between circles corresponding to consecutive levels is not always constant, but as we increase the levels, it becomes shorter. This is because in energy, they are always separated by $\hbar w_c$, and the energy increases as $k^2$, so for keeping the energy interval constant, the change in the value of $k$ between one level and the next one must decrease as we go to higher levels! This happens so the area between levels is constant and the Onsager's relation fulfills.

Now, let's consider the 2DEG before the magnetic field is turned on. The k-points are distributed so that they occupied an area $\frac{(2 \pi )^2}{A}$. When we turn the magnetic field on, they must collapse into the closer Landau level. In the 2DEG, the number of available states, as I said in my question, is lower at lower energies. However, the distance between Landau levels is higher, and then, more states enter the area between circles and this compensates the fact that the number of states is lower and we recover the value of the degeneracy.

I hope this is clear, because it's no easy to explain it properly in a writting text.

Not the answer you're looking for? Browse other questions tagged magnetic-fields solid-state-physics electronic-band-theory or ask your own question.

5
Fermi level with Landau levels
5
Why does the n=0 Landau level in graphene have half the degeneracy of the other levels?
3
Infinitely many degeneracy of Landau level: Countable or Uncountable?
2
Landau levels in 2D
2
Derivation of cyclotron effective mass in Landau quantization
3
What's the coordinate of the Landau tube?
6
I need help with understanding this ad-hoc derivation of Landau diamagnetism at low temperature
0
Internal energy of free two-dimensional electron gas