Centrifugal force in a vacuum

Okay, so there's something I've been trying to puzzle out, and after quite a bit of searching around I've only found almost-but-not-quite answers. And since I'm a chemist, not a physicist, even my Newtonian-fu has degraded catastrophically since uni.

Imagine there's an astronaut, in a spacesuit, strapped to the wall of a spaceship where things have gone terribly wrong. A hull breach has sucked all the air out, so there's just the vacuum of space inside, and the ship is spinning wildly on its axis. The astronaut manages to unstrap themselves, and then launches themselves (let's say with suit-boosters of some kind) from the wall, directly forward - so, in the direction of the center at the moment the force is applied.

TL,DR: object attached to, and then pushed away from, a spinning frame in a zero-G vacuum.

Since there are no gas molecules of any kind to interact with, and if we pretend for a moment that the "push"-velocity away from the wall is achieved instantaneously (zero-to-whatever in no seconds), is it correct to assume that the total velocity vector after breakaway is just the sum of the angular velocity from the spinning frame and the "center"-directed velocity? As in the embarrassingly crude picture below, with red "spin-vector", yellow "push"-vector, and orange "sum"-vector? 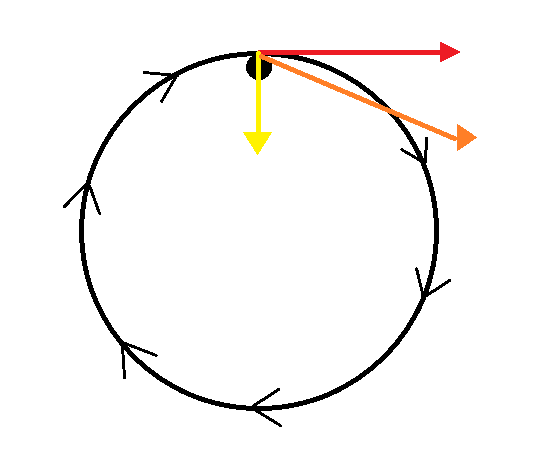 And of course there's going to be coriolis effect, because the astronaut won't be spinning the moment they detach from the surface, while the frame keeps rotating?

Extra wrinkle: If the straps holding the astronaut aren't completely taut, say, a couple cm of slack, will the astronaut still be pulled in tight against the wall, and would they be pulled as far towards the direction of rotation as the straps allow?

Apologies if some or all of this makes no sense, if it's embarrassingly wrong, and for almost certainly missing some obvious, better, scientific terms I could've used to make things clearer. And for making it so damn long.

is it correct to assume that the total velocity vector after breakaway is just the sum of the angular velocity from the spinning frame and the "center"-directed velocity?

Yes. If the push provides a $\Delta v$ of 3 m/s radially and the astronaut’s tangential velocity were originally 4 m/s then the final velocity would be 5 m/s diagonally as shown.

And of course there's going to be coriolis effect, because the astronaut won't be spinning the moment they detach from the surface, while the frame keeps rotating?

This depends on the reference frame you use to analyze the situation. You have drawn the situation in the non-rotating (inertial) frame. In that frame there is no centrifugal force and no Coriolis force. The astronaut travels in a straight line at constant speed after the initial push.

It certainly is possible to analyze the situation in the rotating frame instead. In that frame, the tangential velocity is initially 0, so the velocity after the push would just be equal to $\Delta v$ purely radially. Then, in the rotating frame the astronaut does not travel in a straight line, but is accelerated by both the centrifugal and Coriolis forces.

I concur with the anwser by Dale.

Other than that: one thing that is absolutely necessary is to maintain the distinction between the inertial point of view, and the co-rotating point of view.

In your setup you have even removed all the air, so that once the astronaut has jumped off there is zero physical contact between the astronaut and the physically rotating system.

In order to experience a physical effect the astronaut must be in physical contact with the rotating system.

Let's say you are an inhabitant of an O'Neill cylinder, and you get into an elevator to take a ride up. During that ride a force is required to match your circumnavigating speed with your instantaneous distance to the center of rotation. As you enter the elevator you walk over to the wall that is going to be pushing against you as the elevator starts moving. As you feel that force pushing you go: "Yeah, the Coriolis effect". (And if you absentmindedly position yourself against the wrong wall you're in for a nasty surprise.)

Back to the astronaut in your setup: as far as the astronaut is concerned: once he has pushed off he is simply moving in a straight line, and he is not experiencing any force.

If you happen to have Java on your system:
There is a page on my website where you can download a Java simulation I created some years ago of just this case. The simulation is called Space Station vertical throw. You can set the launch speed and angle with respect to the local normal. The simulation shows side-by-side the inertial point of view and the co-rotating point of view.