Why is this force completely vertical?

I have the following system, which is in equilibrium: 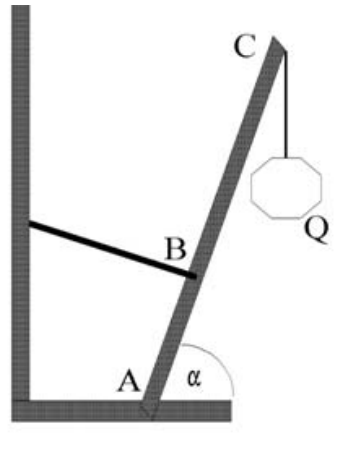 It's a bar that can pivot around A, and is held in place by a string at B

The solution in my book, however, has the following diagram: 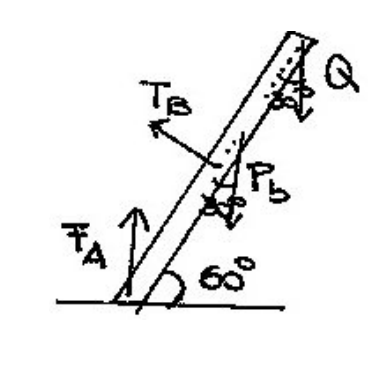 The way it's solved in my book, along with the diagram, imply that the force at the pivot ONLY has a vertical (on the y axis) component.

Why is this true? I would have assumed that, in order for the system to be in equilibrium, this force would have a component on the x axis with the same value and opposite direction than that of the string tension projected on the x axis.

Is my reasoning incorrect? If so, why?

The way it's solved in my book, along with the diagram, imply that the force at the pivot ONLY has a vertical (on the y axis) component.

If $T_B \neq 0$ then that cannot be true because there would be a NET horizontal force acting on the bar, i.e. the horizontal component of $T_B$.

It would, BTW, not be the first time a textbook got something wrong.

Not the answer you're looking for? Browse other questions tagged statics or ask your own question.

1
Cylinder rolling down an inclined plane held by a string
2
Can all systems be put in equilibrium?
1
Determining the components of the force on a curved surface due to pressure
3
How can one conclude upward force is related to tension in this question?
2
What is the force a man exerts on a ramp in equilibrium?
1
Static Equilibrium: Normal Force
3
Why does a force divide equally on multiple supports/legs?