What happens when we connect a metal wire between the 2 poles of a battery?

Since there are electric charges at both poles, there must also be electric fields outside the battery. What happens when we connect a metal wire between the 2 poles of a battery? I vaguely remembered that the wire has the ability to constrain and reshape the electric field and keep it within the wire, maybe like an electric field tube. But is that true?

This question is very fundamental, and is often misinterpreted or disregarded by people. We are all indoctrinated to just assume that a battery creates an electric field in the wire. However, when someone asks "how does the field get into the wire and how does the field know which way to go?" they are rarely given a straight answer.

A follow up question might be, "If nonzero surface charge accumulations are responsible for the size and direction of the electric field in a wire, why doesn't a normal circuit with a resistor exert an electric force on a nearby pith ball from all the built up charge in the circuit?" The answer is that it does exert a force, but the surface charge and force are so small for normal voltages and operating conditions that you don't notice it. If you hook up a 100,000V source to a resistor you would be able to measure the surface charge accumulation and the force it could exert.

For a rare and absolutely beautiful description of how and why surface charge creates and shapes the electric field in a wire refer to the textbook: "Matter and Interactions: Volume 2 Electric and Magnetic Interactions" by Chabay and Sherwood, Chapter 18 "A Microscopic View of Electric Circuits" pg 631-640.

(Note: Electric field is not neutralized by the chemical reaction rather it is maintained by the reaction. No reshaping of the field takes place. The charges move through the conductor since it is the path of least resistance. It is similar to the flow of water through a pipe from a tank. The water flows since there exists a pressure difference. The flow of water does not depend upon the orientation of the pipe. it only depends on the pressure difference at the two ends. Gravitational field does not reshape itself through the pipe. Similarly no electric field reshaping takes place. Only the voltage difference matters between the two terminals.)

Additional comments for those who think electric field can reshape in a conductor along the conductor: 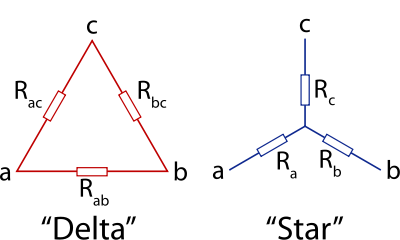 These are simply delta and star connected networks. Now if electric field could reshape then the lines of forces will intersect at three points for the delta and one point for the star networks. But we all know that lines of forces can not intersect. Hence no reshaping of field lines take place.

Before you connect the wire, the electric field (at least theoretically, this requires that you ignore everything else in the universe, including the contents of the battery) consists of a + charge and a - charge. With a typical car battery these points are separated by about 10 or 20cm.

In reality, the charge is distributed in a very complicated manner. For example, if your car battery is rated for 1000 amp-hours, you can compute the "charge" by noting that an amp-second is a coulomb so an amp-hour is 3600 x 1000 coulombs. But actually these charges are held inside the battery chemically and do not appear at the electrodes until you take some of the charge that is there away. So to compute the initial charge you need to know only the voltage and the configuration of the leads. Then it's a matter of electrostatics to compute the charge distribution.

By the way, this happened accidentally to a battery in the back of his SUV. Unfortunately it happened next to a plastic can of gasoline. The resulting fire destroyed his vehicle seconds after he drove to the side of the road an jumped out of it.

Not the answer you're looking for? Browse other questions tagged electricity electric-circuits electric-fields batteries short-circuits or ask your own question.

8
The electric field in wires in a circuit
2
How do electrons distribute themselves along a wire attached to one pole of a battery?
0
What is the voltage at every pair of points along a ideal wire that is connecting the two terminals of a battery?
1
Why is the electric field homogenous inside a circuit?
0
Where do the charge in a series/circuits (?) come from?
1
Why does a light bulb light up instantly
0
Impact of +ive terminal of the battery on the wire (Conductor)
3
What is “electric field causes current in a conductor (metal wire)” exactly?
1
Paradox in Circuit Theory