What is quark-gluon plasma?

My question is pretty simple: what is quark-gluon plasma? I searched it on Wikipedia and I didn’t understand a single word😅! of the article on the state of matter.

In physics, a state of matter is one of the distinct forms in which matter can exist. Four states of matter are observable in everyday life: solid, liquid, gas, and plasma. Many intermediate states are known to exist, such as liquid crystal, and some states only exist under extreme conditions, such as Bose–Einstein condensates, neutron-degenerate matter, and quark–gluon plasma, which only occur, respectively, in situations of extreme cold, extreme density, and extremely high energy. For a complete list of all exotic states of matter, see the list of states of matter.

This quote is another question: how can extreme cold and high energy exist together?

I have taken the liberty to include a link with a quote of what you give as an image, which is the usual way questions are formed on this site.

What is quark-gluon plasma?

The wiki link defines it.

A quark–gluon plasma (QGP) or quark soup is a state of matter in quantum chromodynamics (QCD) which exists at extremely high temperature and/or density.

As you must have realized, physics involves a lot of nested terms. One cannot understand what a plasma is without understanding what the constituents of a plasma are.

You do not give an indication of the level of your physics education, but if you have not yet learned about thermodynamics, let alone quantum chromodynamics (QCD) , it is not possible to reply at a level you will understand.

This wiki diagram comes from thermodynamics and encapsulates the states of matter: 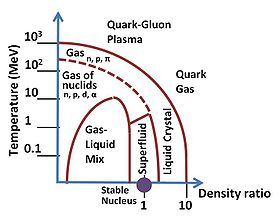 Quark–gluon plasma is in the high-density, high-temperature part on this conjectured phase diagram for strong-interacting matter

how can extreme cold and high energy exist together?

it is the syntax of the question, respectively means each qualifier should go to each state:

(Note for advanced readers: this is meant to be an entry-level introduction, and so there will necessarily be some oversimplifications; when in doubt, consult a reputable textbook.)

what is quark-gluon plasma?

Ordinarily, at temperatures below a few trillion Kelvin, the atomic nucleus is a collection of protons and neutrons. Each proton and neutron, in turn, is made of a triplet* of fundamental particles called quarks. A proton is different from a neutron because it's made of a different triplet of quarks. The quarks are bound extremely tightly into these triplets by the strong nuclear force, and the carrier of the strong nuclear force is the gluon, which you can think of as constantly being exchanged between the quarks in a proton or neutron. In short, quarks are bound together into triplets by gluons.

The fact that quarks tend to associate into triplets like this is no accident - it stems from the fact that the strong nuclear force has three different kinds of charge (called color charge in a nod to the three primary colors). The strong interaction has an interesting feature called color confinement - basically, objects with a nonzero color charge cannot be isolated. If you try to pull two color-charged objects apart, you'll spend so much energy doing so that you will actually create new oppositely-color-charged matter, leaving you with two non-color-charged ("colorless") objects in the end. So everything made of quarks must be colorless. There are generally two** ways to achieve this: either with a quark of one color and an antiquark of the corresponding anticolor, or with three quarks, each of a different color, so quarks are generally always found in pairs or triplets. Protons and neutrons are of the latter type. Note that we don't completely understand color confinement, and studying it quantitatively is an active area of current research.

The above applies for any matter whose temperature is below a few trillion Kelvin. If the temperature is above a few trillion Kelvin, though, the nature of color confinement apparently changes. Instead of being bound into triplets, the quarks and gluons all interact with each other at once and begin to flow, in a single blob of quantum fluid. This new fluid-like nuclear state of matter, in which quarks and gluons are freed from their usual arrangements, is called quark-gluon plasma. It's called a "plasma" because the behavior here is analogous to the formation of an ordinary plasma, in which electrons and ions have enough energy to separate from each other.

how can extreme cold and high energy exist together?